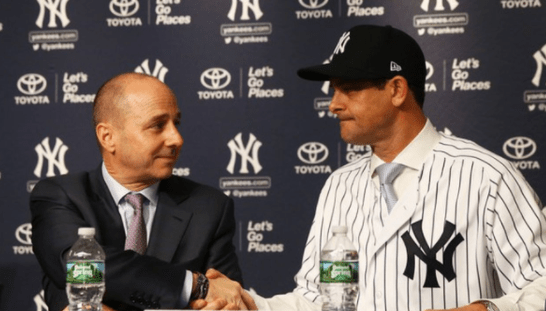 The yankees They have done little, more than little, in this free agency, so like all their fans we are wondering, do they have something planned for this winter? Or just Cashman has decided to do nothing.

Here are some theories.

Theory 1: The Yankees are waiting for the “stoppage” to come.

The most obvious of the theories has to do with the imminent employer strike after little progress in the negotiations between the owners and the Peloteros Union.

This December 2, if there is no contract, MLB it will go on strike and with it all activities are suspended until there is a new employment agreement. If so, the Yankees are most likely waiting for this to better prepare and have a more accurate understanding of the major league’s financial future.

If you look at it, all the great teams (rich and with playoff chances) haven’t budged: Yankees, Dodgers, Astros, Red Sox, Phillies, Cardinals, Braves… they’re all on the same page. Or not?

Theory 2: The Yankees are saving to extend Judge (or generally saving)

The Mules, remember, do not have much financial flexibility. Last year his payroll was the highest in the MLB and this year, even without signings, he is already projected among the top 3.

How to sign someone if you don’t have the famous financial flexibility? Well, it is not done. Although some say that “saving” could serve to extend Judge, a pending issue, we think that they are just saving. Thus, saving to dry, because they have no other.

We are investigating, help us define ourselves, what do you think the Yankees’ strategy will be this winter? 🤔

Theory 3: The Yankees are thinking more about trades than free agent signings

It is a bit related to the previous issue of money. The Mules don’t have the flexibility of Rangers or Tigers this year, and are instead dealing with shedding a few million of the payroll.

What is the easiest way? Letting players like Voit or Andujar go in exchange for some prospects or starters in the positions they need.

Of this we have as examples the rumors with Contreras or the Rangers infielder Isaiah Kiner-Falefa:

Theory 4: The Yankees are betting more on their farms and prospects

The Mules have a ton of talent on their farms, at least to fill the shortstop position. Anthony Volpe, Oswald Peraza, Trey Sweeney, Alexander Vargas and Oswaldo Cabrera are the Yankees’ options for the future of their SS.

So it seems pretty obvious that they have decided to get out of the fight for the star shortstop in this market. More when prices are so high.

This does not explain why they have not gone for any other firm, having the problems that they have in their center line … butooo let’s say that this in combination with one of the others could explain the “patience” of the Yankees.

Theory 5: All of the above

As in any good perfect storm, the reason may not be one but a combination of all. What do you say?

What is the Yankees’ plan in this free agency?