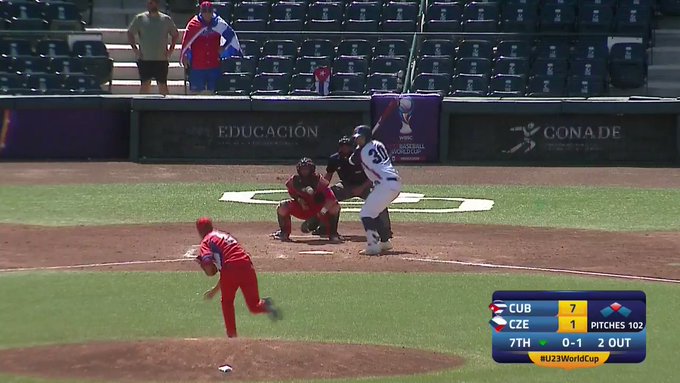 Cuba got its third win in the U-23 Baseball World Cup with a score of 7 × 1 against the Czech Republic. Thus, those led by Eriel Sanchez they would qualify for the Super Round with a Dominican Republic victory over Chinese Taipei. The Yayabero manager repeated the line up winner against Germany. This time, the representatives of the Four Letters hit 8-of-26 (.308) with the help of nine transfers given by the opponents.

The Greater Island of the Antilles opened the scoreboard 3 × 0 in the top of the third inning with a pair of hits, equal number of tickets and three wild pitch on the account of left-handers Viktor Večerka and Jiří Hikl, by the way, the former reached up to 90 mph on the straight. At inning, only Camagüey third baseman Yandi Yánez pushed through a hit.

The 5 × 0 in favor of the Creoles came in the sixth inning with fly of sacrifice of the patrol boat Loidel Chapellí Jr. and a double of Geisel Cepeda that brought Rangel Ramos. Miguel González gave up one out at the plate. The Czechs discounted a hairline at the bottom of the inning by breaking the no hitter by Cuban starter José Eduardo Santos with a triple from the third tree Marek Chlup and completing the score with a sacrifice fly from pinch-hitter Radim Novotný.

Precisely the Spiritusian Santos got the smile of the meeting after shooting the entire film. The right-hander walked 7.0 chapters with 124 shipments (71 strikes), a pair of hits and a clean against, five strikeouts and an equal number of walks.