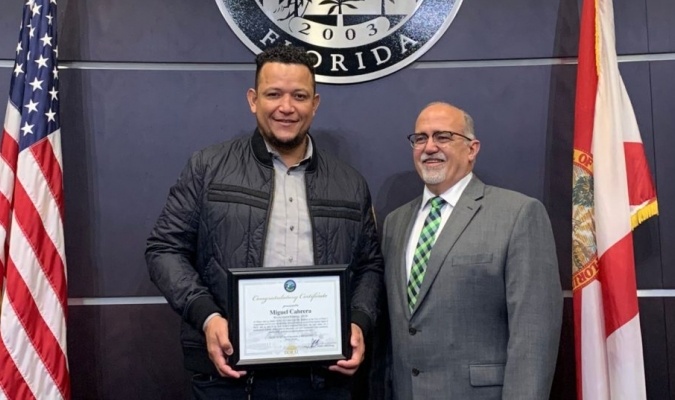 The Venezuelan player of the Detroit Tigers, Miguel Cabrerawas recognized by the authorities of the city of Doral, Miami-Dade County, United States, thanks to his sporting achievements in Major League Baseball.

Pete Cabrera, deputy mayor of the town, presented the award to the “Elder Tiger” with an act of exaltation to the constant work that he has been developing since his debut in 2003 in the Majors.

Cabrera has won two Most Valuable Player awards in the American League and a Triple Crown that he obtained in the 2012 campaign, when he hit .330 with 44 home runs and 139 RBIs, he is also 13 hits away from reaching 3,000 hits and become the seventh player with 3,000 hits and 500 home runs.

The initialist spoke with the journalist Mari Montes about his preparation for the off-season and his position in the face of the employer’s strike.

The Creole player has kept training to arrive in better physical shape for spring training.

“That has been part of my career, trying to work on my physique to get to Spring Training 100%,” Cabrera said in an interview for Extrabase. “I am waiting for them to call us to be ready for any situation.”

The “Venezuelan Tiger” He commented on his position with the job closure of the Major Leagues: “You have to be patient, this is a negotiation and the two parties are going to fight for their benefits.”

“It’s a process that makes many uncomfortable, but you have to do it, you have to be patient and the players are very united,” said Miggy.

“Hopefully their next proposal is something reasonable, something we can sit down and discuss. We have to keep going, I hope there will be baseball this year”, stressed the Maracay player.

The Creole declared that what the union is looking for is to favor young people and that they will not be equal to the owners.

“Here we are not fighting wages,” stressed the Detroit Tigers player. “We are fighting for better insurance, better opportunities for young people, we are fighting for many things that they don’t have in the first six years.”

“A lot of players are being lost along the way because they are not being given the opportunity,” Cabrera continued. “I think we have to change that system so that we can compete more and have a better show.”