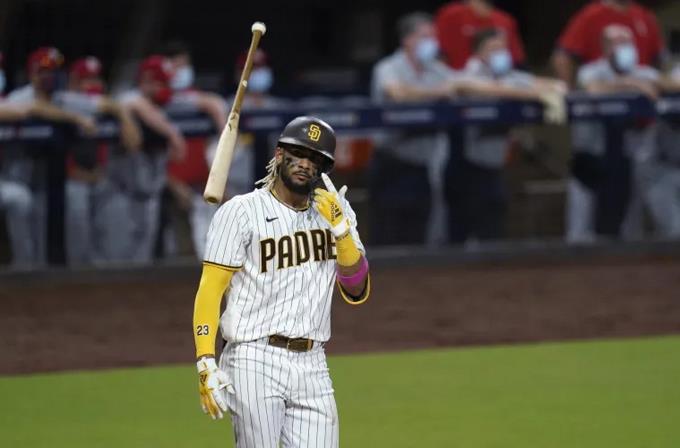 It doesn’t matter what field you play on. The young Dominican shortstop of the San Diego Padres, Fernando Tatis Jr., at 22 years old, has become the most complete and spectacular player in Major League baseball today and that everyone wants to see.

Throughout this weekend his presence in Miami to play the Padres’ four-game series against the local Marlins team has allowed baseball lovers to enjoy the spectacle that Tatis Jr. generates, which also returned to break new mark as a slugger in the majors.

His 30th home run that he hit last night came when he had just been pitched twice on his first trip to the batter’s box.

It took just 82 games for the 22-year-old Tatis Jr. to hit 30 home runs, the fewest number ever needed by a slugger his age or younger, and the first Padres player to do so after beating Gary Sheffield. , who did it in 1992, but with 23 years.

The way Tatis Jr. imposes her power in every facet of the game has impressed a legendary Hall of Famer like Derek Jeter, current CEO and shareholder of the Marlins.

“We are just looking at a special player who can do everything and well,” Jeter said. “It’s a lot of fun to watch, whether it’s on defense, offense or running the bases. I think they have a player in San Diego that those fans are going to enjoy watching for a long, long time, just like the rest of the majors.”

Tatis Jr.’s home run made him the third shortstop in major league history to hit 30 home runs in a single season at age 22 or younger.

In addition, he has also shown perfect control when he is in the batter’s box against the sometimes questioned calls from the plate umpire about balls and strikes, as happened on Saturday against the Marlins by main Doug Eddings.

Padres manager Jayce Tingler praised the way Tatis Jr. understands how necessary he is within the team and how to control frustration with always staying in the game.

That exemplary behavior is already beginning to be recognized by all fans throughout the Major Leagues, as it happened in Miami, when Marlins fans were the first to marvel at seeing Tatis Jr. send the ball to the stands to a speed of 179 kilometers per hour.

Tingler can’t get enough of talking over and over again about what Tatis Jr. can do offensively, yet it’s his behind-the-scenes actions that impress the most.

“It’s great,” Tingler said, valuing the power of Tatis Jr. “It’s quite unique. It’s one of the main attractions from one city to another. It’s just great and fundamental to the overall growth of the sport of baseball.”

The Padres shortstop has never lost all the naturalness and camaraderie he expresses on and off the field, as well as maintaining an exceptional work ethic.

It’s one of the main reasons Tingler is proud that Tatis Jr. represents the game of baseball to a wide audience.

“We are facing an exceptional person and a special professional, with qualities that will allow him to always keep up the pressure, no matter how young he is and how famous he is,” added Tingler.