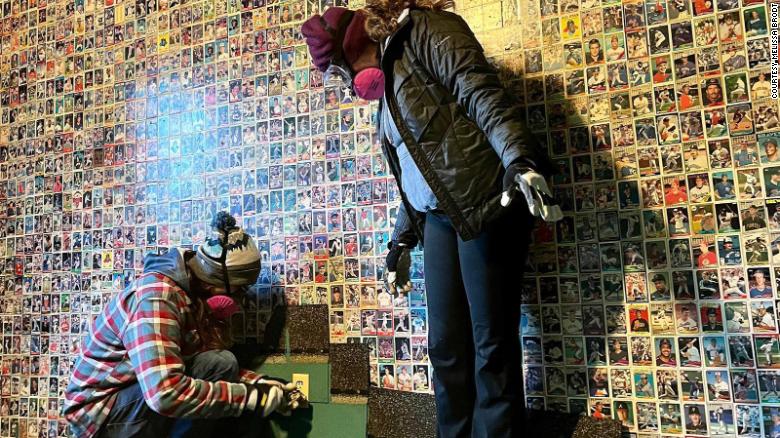 (CNN) — Melissa Brodt wasn’t sure what to expect when she removed dark green shingles from a bedroom wall in her Boise, Idaho home that she was remodeling for her son.

Asphalt roof shingles were an odd choice for covering the walls, so she’d been prepared for just about anything, but seeing row after row of baseball cards from the 1970s and 1980s attached to the walls was still a surprise.

“We’re not really baseball fans, so I didn’t really know what I was looking at, but a lot of friends were like, ‘Oh, I know that guy.'”

The cards aren’t likely to make hardcore collectors swoon, but there are plenty of faces familiar to fans from the era, including Mike Schmidt, George Brett and legendary manager Whitey Herzog.

Unfortunately, being stuck in a wall for decades likely erased any value the cards may have had. Brodt said his son Luke tried to remove some, but the images just fell off the cardboard backing.

“The only way to really remove it is to cut through the drywall and take it apart into pieces,” he said.

Melissa Brodt, pictured standing, and her son Luke found hundreds of baseball cards taped to a bedroom wall while renovating a home.

This is how the baseball cards ended up on the wall

Brodt bought the house, which was built in 1969, from the original owner in December. He is stripping her “down to the bone” to restore her.

After discovering the wall of baseball cards, Brodt said he contacted the owner’s son, who still lives in Boise.

Nelson told CNN that his mother was very artistic and would allow him to redecorate his room every few years when he was a child.

When he was 12 or 13 years old, Nelson said he had amassed a large collection of baseball cards.

“In the late ’80s I was absolutely obsessed with baseball,” he said. “We decided we were going to paper one of the walls with excess baseball cards.”

It took Nelson and his parents a weekend to complete the project.

“We got some pretty strong adhesive and we each got a stack of cards and a paintbrush, and we just painted the glue on the back and stuck them to the wall,” he said. “It was a nice little family activity.”

His friends thought the wall was “super cool” when they came over to play, Nelson recalled.

As Nelson grew older, it was time to redecorate, but painting over the cards was not an option and, as Brodt later discovered, they were too stuck together to remove.

“We ended up with some packages of roof tiles, nailed them to the wall and painted them,” Nelson said.

For now, it has not been decided what to do with the wall full of baseball cards.

“I’d love for someone to come and take it if they think it’s useful,” Brodt said. “We have no interest in keeping it because it doesn’t really go with mid-century modern decor and we’re not really baseball fans.”

Nelson doesn’t care if the wall ultimately stands, but, he said, the discovery brought back fond memories of his parents, who died last year.

“It’s a nice memory of a family activity we did for a couple of days where we all got along and had fun together,” he said.