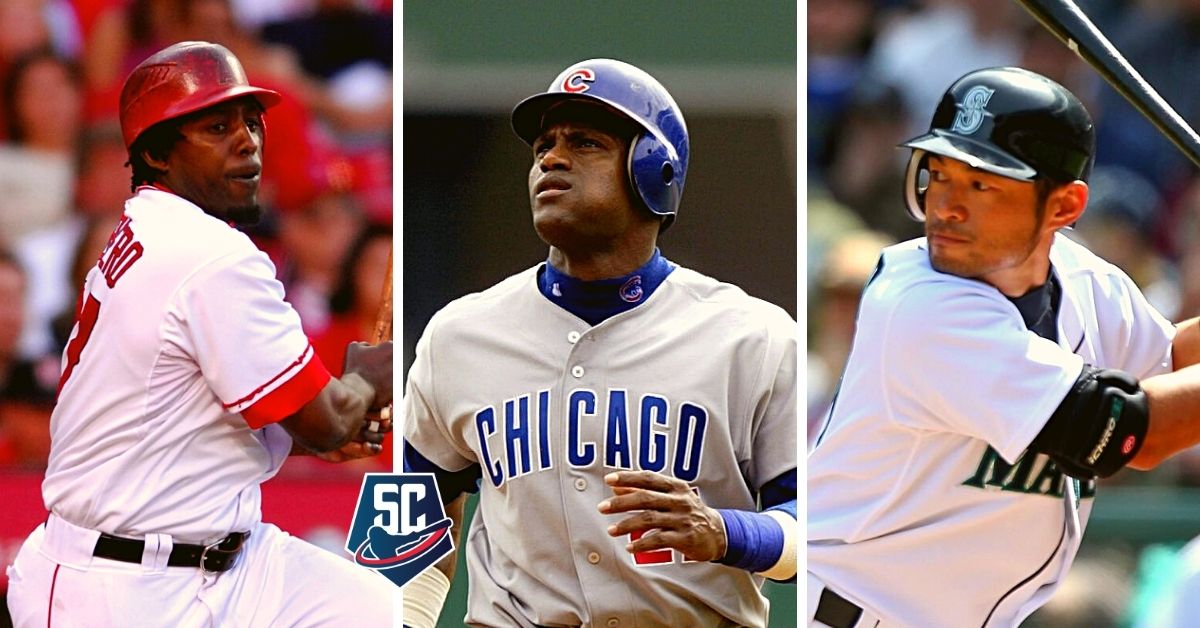 If the other two outfield positions are mined from heavy hitters, this is no exception. Right field is mainly patrolled by players with a powerful arm and offensive qualities. There are a number of talented players playing in the RF right now, such as Mookie Betts, Aaron Judge and Bryce Harper, but it is too early to include them among my 10 all-time favorites. Throughout history there are many luminaries that have excelled in RF, there is too much material to choose only 10, but I will try, although several that also deserve to do the degree remain off my list. Imagine a player of the stature of Canada’s Larry Walker, Dave Winfield or Al Kaline, not being on this list, although I took them into account like other stellar RF, I decided on these ten:

1- Babe Ruth: Simply the best exponent of baseball in history. I have no other qualification for George Herman Ruth. Some may not agree with this statement, but it is not the majority. “The Bambino” or “The Sultan of Swat” was the most feared hitter at the plate ever seen. What makes Ruth stand out from her peers is that in addition to being an extra class with the club, he pitched for 10 seasons and won 20 games twice. His best season was in 1916, going 23-12 with a 1.75 ERA (AL leading) and nine shutouts (also leading) pitching for Boston. Then with the Yankees he had his best offensive seasons. Ruth finished his career with a .342 batting average, with 714 home runs, 2,214 RBIs, 2,174 runs scored, 123 stolen bases and 2,062 walks. He is the all-time leader in: OBP .474, SLG .690, OPS 1.164 and OPS + 206. Babe was MVP in 1923, won a batting title, participated in 2 All-Star Games and won the World Series 7 times. Ruth led the American League in different offensive lines in multiple seasons, including: 8 times the runs scored, 12 times he was the king of home runs, 5 times the RBIs, 11 times the walks and 6 times the total. of bases. His ex-teammate Joe Dugan once said, “To understand him, you had to understand this: he was not human.”

2- Hank Aaron: “Hammerin ‘Hank,” as he was called, was a consistent producer both at the plate and on the field, hitting the .300 mark over 14 seasons (won two batting titles), 30 home runs 15 times ( 4 HR titles), 90 RBIs 16 times (4 times leader) and captured three Gold Glove awards, with 25 All-Star selections. Nineteen fifty-seven was possibly Aaron’s best season. That year he hit .322 with 44 home runs and 132 RBIs, won the National League Most Valuable Player award and led the Braves to their first World Series Championship since 1914. In his 23-year career in the majors, “Bad Henry” finished with a .305 batting average, with 3,771 hits, 755 home runs, 2,297 RBIs (all-time leading), 240 stolen bases and received more walks (1,402) than strikeouts (1,383). Also, Aaron is the all-time leader in total bases with an astronomical 6856. Boxing legend Muhammad Ali once called Hank Aaron “The only man I idolize more than myself” ……. Coming from Ali, it is worth noting!

3- Roberto Clemente: Idol of all Puerto Ricans, Latin Americans and baseball fans in general. The player who did not live long, but left good deeds, good numbers and achievements for posterity. “The great one” was an excellent player, one of the most complete that has passed through Las Mayores, a great hitter and a magnificent defender, with a powerful and accurate arm. In his 18-year career (all with Pittsburgh), he hit .317, with 240 home runs, 1305 RBIs, 1,416 runs scored, 3,000 hits, 440 doubles, 166 triples and 83 stolen bases. He was selected to the All-Star team 15 times, starting in right field seven of them. Clemente won 12 consecutive Golden Glove awards (from 1961 to 1972), four batting titles and 2 times he was the most indisputable hitter in the National League. His best season came in 1966 when he won his only MVP award. He hit .317 that season with 29 homers, 119 RBIs, 105 runs scored, 202 hits and 7 stolen bases. In addition, he won two championships with the Pirates (in 1960 and 1971), becoming MVP in the 1971 fall classic. On December 31, 1972, Clemente boarded a small plane en route from Puerto Rico to Nicaragua to help the victims of the earthquake. . The heavily loaded plane crashed off the coast of Puerto Rico and Clemente’s body was never recovered.

It may interest you: The 10 best in history: Third basemen

4- Mel Ott: I leaned for Clemente in third place on this list, but it could well be “Master Melvin” (Mel Ott’s nickname), his numbers in right field are only surpassed by Ruth and Aaron. Ott led the Giants to three NL pennants and to the 1933 World Series title, hitting .389 with two home runs and four RBIs in the Giants’ five-game victory over the Washington Senators. He managed the Giants from 1942 to 1948, serving as a full-time player in four of those seasons. A 12-time All-Star, he finished his 22-season career (all with the NY Giants) in the Major Leagues with a .304 batting average, 488 doubles, 1859 runs scored and 1860 RBIs. Ott is one of only four players in history, and he became the first player in the National League, with at least 1,800 runs scored, 1,800 RBIs and 1,700 walks. He led the National League in home runs 6 times, RBIs once, scored twice, walked 6 times, once at SLG and multiple times led in OBP, OPS and OPS +.

5- Valadimir Guerrero: I enjoyed every turn at bat that I could see from the Dominican, an improved version in the batting box of Cuban Lázaro Madera (he only played in Cuban tournaments and occasionally international with the National Team). Well yes, “Vladdy” the same connected a send in zone that another almost impossible to hit by any other slugger. But that’s how he managed to win 8 Silver Bat awards and the American League MVP in the 2004 season with the Angels (39 HR, 126 CI and .337 AVG). Guerrero participated in 9 All-Star Games and won the HR Derby in 2007. In his 16-season career he hit an extraordinary .318 average, with 449 home runs, 1,496 RBIs, another 1,328 scored, 181 stolen bases and something very striking, Guerrero would swing at any send, but he never struck out 100 times in a season (985 in his entire career). In 2002 with the Expos he hit 39 home runs and 39 bases ripped off, showing the power and speed he possessed. Defensively he showed a powerful arm, with impressive shots to the bases, he has achieved outs that have remained in the memory of the fans.

6- Tony Gwynn: Owner of eight batting titles (equaled Honus Wagner’s record for the National League), 7 Silver Bat awards and 5 Gold Glove awards. «Mr. Father »played the 20 years of his career with San Diego, a team with which he was selected to 15 All-Star Games. In his career he averaged .338, shot 3,141 hits, 543 doubles, drove in 1,138 runs, scored 1,383 and cheated 319 bases. In addition, he walked 790 and struck out only 434 times. He led the National League in hits 7 times, once in runs scored and once in OBP. Greg Maddux once said of Gwynn: “He’s easily the toughest hitter for me. I can’t think of anyone connecting me stronger. He handles the field as well as anyone, and is able to stay on top of the plate when shipping is inside. Their holes are very small.

8- Reggie Jackson: «Mr. “October” was so popular that he even became a star off the field, appearing in movies and television shows. Jackson was a 14-time American League All-Star, a member of five World Series champion teams, and won the American League Most Valuable Player award in 1973, where he led the youngest circuit in home runs, RBIs and runs scored. . After five years in New York, Reggie moved west and joined the California Angels. During his first season with the Angels, Reggie once again led the league in home runs. He ended his career where it began, as a member of the Athletics. In 21 major league seasons, Jackson had 2,548 hits, 563 home runs, 1702 RBIs, 1,551 runs scored and 228 stolen bases. He was very talented, he had enormous power in his wrists, he was fast running, but we must also mention his Achilles heel, making contact with the ball was very difficult for him, he is the historical leader of the MLB with 2,597 strikeouts received. Sure, this deficiency is set aside when the victim is a slugger who was a 4-time AL home run leader.

9- Ichiro Suzuki: The Japanese was sensational, an extraclass. One of the best “leadoff hitters” in history. Ichiro made his MLB debut at age 27 and immediately wowed all viewers by winning MVP and Rookie of the Year in his first season. From there, he led the league in hits seven times while racking up a staggering 3,089 hits in the majors. Combined with the 1,278 hits he had already scored in Japan, they add up to 4367 undisputed hits. He finished his 19-year career in the majors with a batting average of .311, scored 1,420 runs, stole 509 bases (led the American League in 2001 with 56), won 3 Silver Bat awards, 2 batting titles, 10 Golden Glove awards (movement, safety, acrobatics, accurate and powerful shots, a spectacular RF), he was selected to 10 All-Star Games (MVP of the 2007 classic). Your call to Cooperstown will come in 2025 and it is certainly unanimous, although I would not be surprised if some of the voters do not think so.

10- Sammy Sosa: The Dominican’s numbers are impressive, despite the fact that his detractors try to belittle the feats he achieved during his 18 years in the Major Leagues. Sosa’s career and even his later life have been mired in one controversy after another. All of this can take a toll on your possible selection to the Cooperstown Hall of Fame. Nonetheless, he produced some of the best offensive seasons in MLB history, surpassing 60 home runs three times and also two seasons of at least 30 home runs and 30 steals. “Slammin Sammy”, as he was called, won 6 Silver Bat awards, an HR Derby (2000), was present in 7 All-Star Games and was named Major League Player of the Year in 1998, the same year he won MVP in the National League. In his career he hit 609 home runs, drove in 1,667 runs, scored another 1,475 and cheated 234 bases. In addition, he won 2 home run titles, 2 RBI titles, 3 runs scored and 3 total bases.

Of the 10 selected RFs, only Ichiro suzuki and Sammy Sosa are not members of the Cooperstown Hall of Fame.