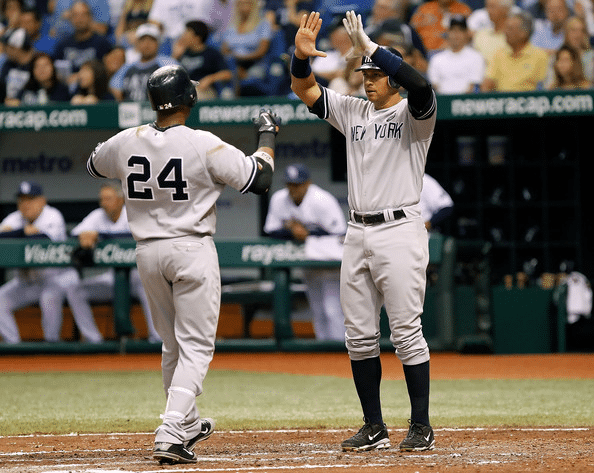 The Yankees of New York is one of the most emblematic teams of the Major League Baseball – MLB and then we will show you his lineup historical of Latino players who have dressed their uniform in the best baseball in the world.

Countless players have donned the striped uniform of the New York Yankees, but Latinos who have played in the Major Leagues with this organization should not be passed under the table, all leaving a mark and an important step for this team that has the most World Series championships in its showcases.

The Puerto Rican played 17 years with the Yankees in the MLB, went to five All-Star Games, won five Silver Bats and was a four-time World Series champion, one of the best masks that this organization has ever seen.

The also Puerto Rican played his first four years in the Major Leagues with the Yankees, hitting six home runs and his career average in the Bronx was .228. In addition, it is good to note that it is one of the positions where the Yankees have not had a Latin player as a starter.

The Dominican played from 2005 to 2013 with the Yankees, he established himself as one of the best waiters in the Major Leagues and with this team he was four All-Star Games and a pair of Golden Gloves.

While saying Yankees shortstop is to think quickly of Derek Jeter, but the Venezuelan started it for three consecutive seasons (1989 to 1991) and without a doubt it is an honor.

The Dominican spent the most years of his career in New York and the Bronx fans enjoyed his home runs, A-Rod in this uniform was a seven-time All-Star, won three Silver Bats, two MVPs and a World Series.

The Dominican played seven seasons with the Yankees, where he was always a luxury piece in the lineup, leaving important things like 121 home runs and 130 stolen bases.

The Puerto Rican shone throughout his career with the Yankees and in 17 years he won a batting title, went to five All-Star Games, four World Series, four Gold Gloves and a Silver Bat.

The Venezuelan in the two seasons he was with the Yankees did it full time, drove in more than 100 runs, hit .295 and hit 420 hits.

Cuban “El Duque” was in his six years with the Yankees an important piece in the rotation, he won more than 60 games and struck out 703 in this uniform and won three World Series championships.

Without a doubt, the Panamanian is one of the best relievers in all the Major Leagues and for 19 years he shone with the Yankees, registering a record of 82-60 and a total of 652 saves, having a brilliant career that led him to be elected to the Hall. of Fame unanimously.

With info from MLB.Com

Historic lineup of Latinos who played for the Yankees