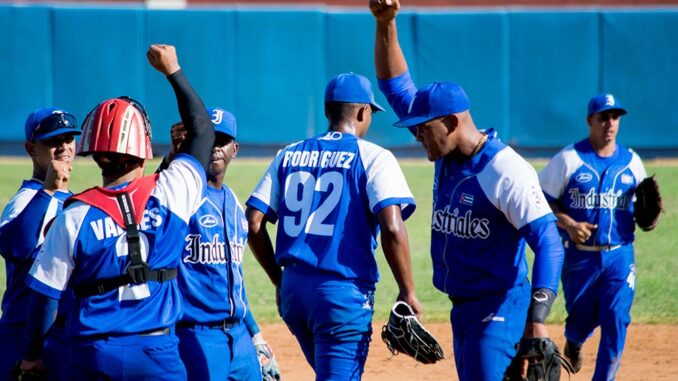 Last June, the baseball authorities in Havana announced the preselection of the Industrial team with a view to forming the Blue team towards the 61st edition of the National Series. Since then, due to the health situation that has been experienced in Cuba, the start date of the Cuban domestic classic has been modified, which has caused changes in the preselections of each of the provinces, whose updates have been timely reported.

However, in the specific case of Industriales, officially, no update has been published to the group, despite the possible news having been announced several times, without success yet, with the team led by Guillermo Carmona becoming one of the few in the country without offering their listing.

It may interest you: VISITED HAVANA: Yasmany Tomás on a walk with the family in Cuba

In this scenario, today Monday, December 6, the website of Industriales de La Habana public a note in which he summarized the main movements that have occurred in the capital’s campus in recent months, as a result of different situations that have occurred and that can give an idea of ​​what is coming for the Blue troop.

As reported by Gianluca Hernández, the biggest changes in the preselection of Industriales are concentrated in the pitching area, in which the losses of their main starter, right-hander Bryan Chi and their star closer, Andy Rodríguez, who decided to leave their respective teams stand out. Cuba in the U23 World Cup and the Pre-Olympic of the Americas, respectively.

It may interest you: MULTIMILLIONAIRE LIVING IN CUBA: Raidel Martínez SIGNED a juicy contract with Chunichi

However, two pitchers return to the team who at some point left the country for the Dominican Republic in search of a Major League Baseball signing: the cases of Marcos Ortega and Erick Christian González, as well as Pedro Álvarez from Spiritus, who finally managed to dress in blue for the Series. 61, or at least integrate the pre-selection of Industrials, after a long process.

Another important addition is that of the torpedo boat Ariel Echevarría, who also tried his luck abroad and is now returning to the blue ship.

It may interest you: GOODBYE Japan: FIRED another Cuban player in the NPB

According to the aforementioned note, the case of Lisbán Correa, an offensive benchmark of the 60 Series in the country and among the leaders of various batting departments, is still in doubt, who due to discrepancies with the Cuban Baseball Federation during his contract in Mexico, was excluded from the capital team and his luck towards Series 61 is not yet cast.

Those who are confirmed in the blue preselection are the cases of some players from other provinces who will try to find a place in the Industriales team in the 61 Series. Among them are: Walter Pacheco, Lázaro Ponce, Yasiel Santoya, David Mena and Sandy Menocal .

The team of Industriales finished in eighth place in the Series 60, after qualifying in extremis and falling defeated against the champion Granma in the quarterfinals. In the next season, the flagship Cuban baseball team will return to the postseason and fight for a title that it has not won for more than a decade, a debt it owes to its fans.

HIGHS and HIGHS in preselection from Industrial to Series 61