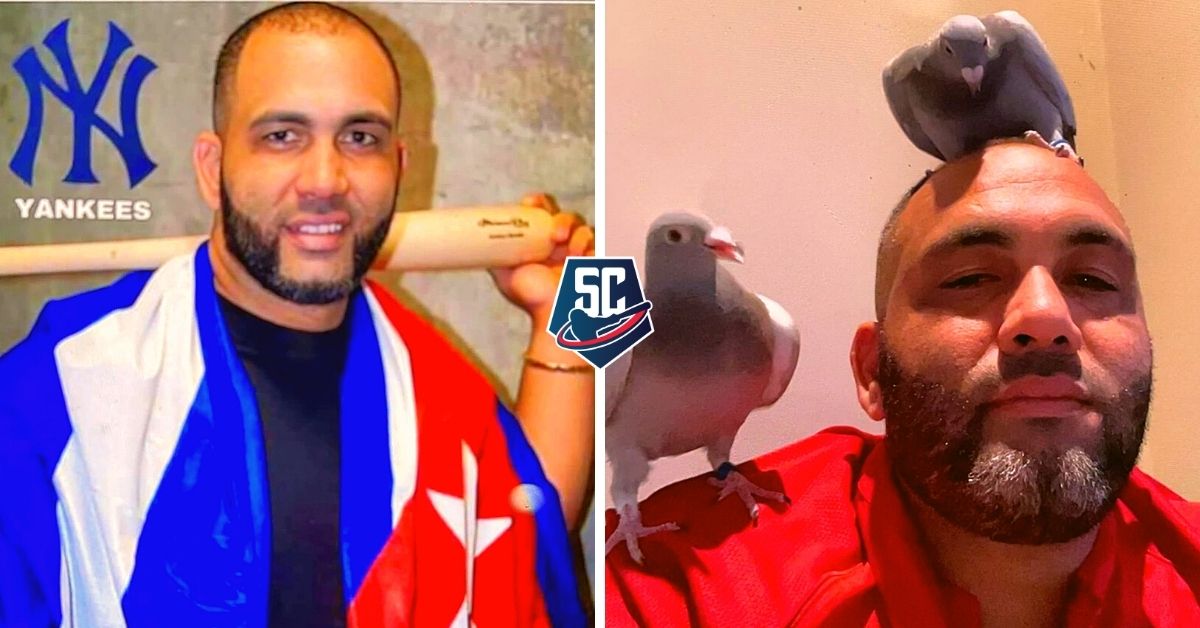 I have not the slightest doubt that the protagonist of this interview has been one of the best Cuban hitters in history. I had the good fortune to see him play in the youth category, in the National Series and in the Major Leagues and he always excelled at “clean stick.” I mean the “sensational” Kendrys Morales. But if the man was great as a player, I can assure you that off the pitch he is also an example of simplicity and humility. Kendrys did not hesitate for a second to agree to the interview, showing a waste of kindness at every moment.

Perhaps the youngest do not remember his exploits in the National Baseball Series, when at only 17 years of age he held the responsibility of being the fourth batter of the Industriales team, a turn in which he would also serve in the National Team. In National Series (always with Industrials) he played 231 games, connected 287 indisputable, 37 home runs, achieved .330 batting average, .537 Slugging, .425 OBP and .962 OPS.

It may interest you: Kendrys Morales, the day you wanted finally arrived

–To begin, I want to leave a doubt, in some media your name appears as Kendrys and in others simply Kendry. What’s your real name?

– First of all I want to thank the Complete Swing team for taking me into account, as well as all the fans and fans of mine who supported me in my sports career. My name was always written with an S, when I arrived in this country it was that they took the S.

-After retirement you have not been seen linked to baseball. What do you do today? Tell me about your family and your favorite hobbies.

-I have had opportunities to continue in baseball and I have even received calls from Toronto to be a hitting coach and last week I also received a call from the Yankees. The only reason I turned it down is that I have spent many years away from home, separated from my family, and decided to stay home. I would have liked to continue contributing as a coach but first comes the family. I live with my wife, we have been together for 18 years and with two of my three children. My oldest girl does not live with me, she does it with her mother. The other two do live with me, the other female and the male who is the youngest.

-Up to the youth category the same thing you threw that you played as a position player. What made you dedicate yourself to hitting and not pitching in the future?

-I’ve always liked to pitch, I didn’t do it badly, I enjoyed it a lot because I felt a lot of responsibility when I pitched. The decision to hit was when I finished the juniors, I really liked being a pitcher, but I went first for batting, if it didn’t work I would go back to pitching.

-In the National Baseball Series (SNB) you set several records for rookies. Do you remember any in particular?

-Well, the ones I remember are the hits, the home runs and the RBI. I was little of looking at the numbers, I went out to play every day.

-Continuing with the SNB. Which of the players you met impressed you the most?

-The player who always impressed me with his form outside and inside baseball was Lázaro Vargas. Many sympathized with him, others did not, but if they gave me to lead a baseball team, I would like to have 25 Lázaro Vargas on the payroll.

-You played with Industriales in Cuba and in the MLB with seven different teams in 13 seasons, including the Yankees. Do you feel lucky to have played for these two iconic outfits?

-Yes, I feel very lucky, of course. Who does not? Hahaha, but I keep saying that Industrial is Industrial.

-You could play in the SNB and in the MLB. Logically the difference in terms of the level of both leagues is very distant. Can you name some of the differences that stood out to you the most?

-The differences that most caught my attention were: all. There are customs here that we in Cuba did not have. We all had to totally change here and the one that didn’t presented a lot of problems. But the difference is very big.

-2015 was a great year for you. You won the World Series ring with the Kansas City Royals and won the Silver Bat award. How do you remember that season?

-That season was a crazy thing. We had a very shared team but what led us to win the championship was how close we were. There was a lot of respect between everyone, from the owner of the team, to the charge bat.

-Of the pitchers you faced in MLB and the players who coincided with you at the time, which ones made the most impression on you? And which pitcher was the hardest for you to hit?

-Of the position players I had the opportunity to play with a phenomenon, Mike Trout, something out of the ordinary and the pitchers were two: Félix Hernández and Roy Halladay, may he rest in peace.

-You are one of the best switch hitters I have ever seen. Were you more comfortable hitting left or right?

-Thanks for the compliment, hahaha. I’m a natural right but I felt more comfortable on the left.

-Of the Cuban players who are currently active in the MLB. Which ones attract your attention the most?

-For me the most stable in the Major Leagues as a hitter is Pito Abreu, a horse.

-Do you have any childhood or youth idols?

-I always admired Antonio Pacheco when he was a player.

-During your career in Las Mayores you used eight different numbers on your shirts. Any favorite?

-My number was 8, but I played with several numbers because when I got to a team there were players who were using it. I had the right to ask for it because of the years I had been in the majors, but I didn’t, so I played with various numbers.

It may interest you: Kendrys Morales: every past era was better

-Of the managers who directed you in Cuba and in the Major Leagues. Which ones did you feel better about?

-In Cuba I only had one in the National Series, Rey Vicente Anglada. He liked the player to play vigorously, one of the things I like most about a manager. In MLB Mike Sciocia led me with Anaheim, he was very demanding too.

-That home run with which you decided against Brazil in the 2003 World Cup is remembered by all Cubans. What moments throughout your entire career (SNB and MLB) do you remember with the greatest satisfaction?

-Yes I remember. Another one that I really enjoyed was the home run I gave to Houston in Game 5.

-I understand that one of your favorite hobbies is caring for animals. Can you tell me about it?

-Yes, I have several animals that apart from my family I spend time with them and I take care of them. I have horses, ponies, roosters, goats, two cats and 11 dogs. That’s where I use most of the time. Ah, the pigeons were missing, which are like 100 and a little pig. It’s a zoo, haha.

-During the 13 years that you played at the highest level, you surely created good friendships. Which players did you relate to the best?

-I got along well with all my classmates. I am still in communication with several of them. With the Americans not so much because of the language, haha. But I did make very good friends.

-Antonio Scull said on one occasion that he and the Cuban people would like to see you in the Industriales uniform once more. Do you think this opportunity is possible?

-Firstly I’m going to apologize to Scull and all the fans. If I wanted to go play in Cuba, I am not going to say no because I would be lying to everyone. But I also want you to understand me, that if they took me out of a stadium in Cuba and other fields that I couldn’t train in because they wouldn’t let me in, how am I going to step into a stadium there to play baseball? I think that with these words all fans understand me.

-If you had to make up an ideal team of Cuban players of any era and league. What would be your chosen ones?

-In this step, I’m very bad at making teams, haha.

-A few days ago Swing Completo I remembered moments from the documentary Out of the League (2002) in which you said that you would like to see yourself 20 years later. Yasel Porto dedicated an exciting letter to you. You still live in the hearts of all Cubans. Would you like to dedicate a few words to the island’s baseball fans and those who also reside outside of it?

-I would like to thank all those fans and Swing Completo, who took me out of the nest hahahaha. I am very proud to know that you still remember that moment and the words I said, from my heart I say them. I also want to tell the Industriales fans that they are unmatched, that there is not a fan in the world that is like yours. A hug and God bless you all.

On behalf of Swing Completo and the entire baseball fans, thank you Kendrys.

EXCLUSIVE interview with Kendrys Morales: Between homers, pigeons and memories