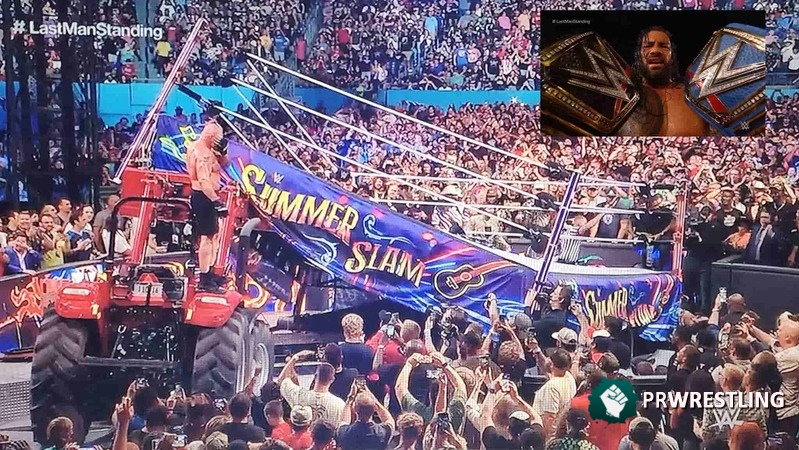 Bianca Belair defeated Becky Lynch to retain the Raw Women’s Championship when Lynch looked to hit a Man-handle Slam off the center rope, but Belair answered with a Spanish Fly. She immediately followed up with a KOD for the win.

Lynch offered Belair a handshake after the match.

Suddenly, Bayley’s music plays and she comes out and stopped at ringside. Then Dakota Kai entered. Corey Graves freaked out because he didn’t think Kai was under contract. Io Shirai also comes out.

Bayley, Kai and Shirai stepped into the ring together to face Belair. Lynch joined Belair and the trio backed away.

Paul cleared the announce table and climbed to the top rope to launch a massive Frog Splash to the outskirts on Miz. Paul pushed Miz into the ring and tried to cover him, but Maryse distracted the referee. Miz tried to hit Paul with a phone, but Paul ducked and landed a Skull Crushing Finale to win.

There was an advertisement for a water bottle company with Maximum Male Models (Mace, Mansoor, Maxxine Dupri and Max Dupri).

Bobby Lashley defeated Theory to retain the United States Championship in 4 minutes after the Hurt Lock.

Dominik & Rey Mysterio defeated Finn Bálor & Damian Priest (w/Rhea Ripley) in fight without DQ. Ripley intervened but a remixed version of the Brood theme began to play and stairs appeared in the hallway. Fireworks went off as Edge climbed the stairs and marched into the ring.

Edge hit Spears on both Priest and Bálor. The Mysterios gave Bálor a double 619 and Rey followed it up with a Splash for the win.

Pat McAfee defeated Happy Corbin with a Code Red from the middle rope to win.

Exit Drew McIntyre and said that he would beat whoever won tonight and take both titles at Clash at the Castle. He asked the crowd for a Claymore countdown. He raised his sword and fireworks exploded.

The Usos retained against the Street Profits (with Jeff Jarrett as referee) after double kicking Dawkins.

Riddle barged in suddenly in the ring. He explained that he wasn’t cleared to wrestle, but called Seth Rollins in for a match anyway.

Rollins walks out and the officers try to stop him. Rollins ran down the hall and Riddle attacked him. When they got to the ring, Rollins gave Riddle a stomp. Rollins left and the officials checked on Riddle.

Liv Morgan defeated Ronda Rousey to retain the Smackdown Women’s Championship when Ronda armbared her but the referee counted Ronda’s shoulders against the canvas, even though Morgan gave up.

Rousey attacked Morgan afterwards and then put the referee in an armbar until she is separated by officials.

Glenn Jacobs (billed as Kane) was introduced to the crowd. He announced an attendance of 48,449.

Lesnar put on a cowboy hat and drove a red tractor to the ring. They found everyone and distributed F5s and Superman punches that were not enough.

Lesnar got back on the tractor and LIFTED PART OF THE RING causing Reigns to roll out of it.

The Usos appeared to attack Lesnar. Lesnar grabbed Heyman and gave him an F5 through the announce table. He plays Theory’s music and runs off with a referee and his briefcase. Theory hit Reigns with the briefcase, but before he could officially cash in, Lesnar gave him an F5.

Reigns hit Lesnar with the belt twice and the Usos buried Lesnar under tables and steel steps. Reigns stood on top of the pile and Lesnar didn’t move. The referee counted to ten for Reigns’ victory.

Reigns hugged the Usos. He also hugged Heyman afterwards and celebrated his victory to end the show.