WWE SUMMERSLAM 2021 .— The hottest event of the summer is here. Wwe decided to organize this SummerSlam on Saturday, in a stadium, and no less than in the city of Las Vegas, so the atmosphere will be unbeatable. There are ten fights that the company led by Vince McMahon: Six from Raw and 4 from SmackDown. Many rivalries will reach their climax, while many others will take on new vigor. SummerSlam action is broadcast from the Allegiant stadium, on The Vegas, Nevada.

This night is #SummerSlam, where we will see @WWERomanReigns defending the Universal title against @John Cena, while @fightbobby will have as a challenger @Goldberg

The most anticipated fight of SummerSlam is on the part of SmackDown: Roman reigns defends the Universal Championship against John Cena.

On the part of Raw, his main duel is for the WWE Championship: Bobby lashley will have a difficult defense against Goldberg.

Regarding women’s titles, the Raw Champion, Nikki ASH, will face in Triple Threat Charlotte flair already Rhea ripley. On the other hand, the SmackDown Champion, Bianca belair, will defend the belt against Sasha banks.

The duo titles will also be put into play: AJ Styles and We hear they will defend the Raw Couples Championship versus RK-Bro (Randy orton and Riddle), while Hey use and Jimmy Uso They will expose the SmackDown Couples Championship in view of Mistery King and Dominik Mysterio.

In another titular duel, Damian Priest will be the challenger of Sheamus for him United States Championship.

We will also see two duels with nothing at stake but that promise to be intense: Drew McIntyre will face Jinder mahal in a fight in which See and Shanky they will be banned from the ringside area.

Secondly, Seth rollins will collide with Edge. Their heads up is one of the most anticipated encounters.

What’s more, Alexa bliss will face Eva Marie, who will be accompanied by Doudrop. 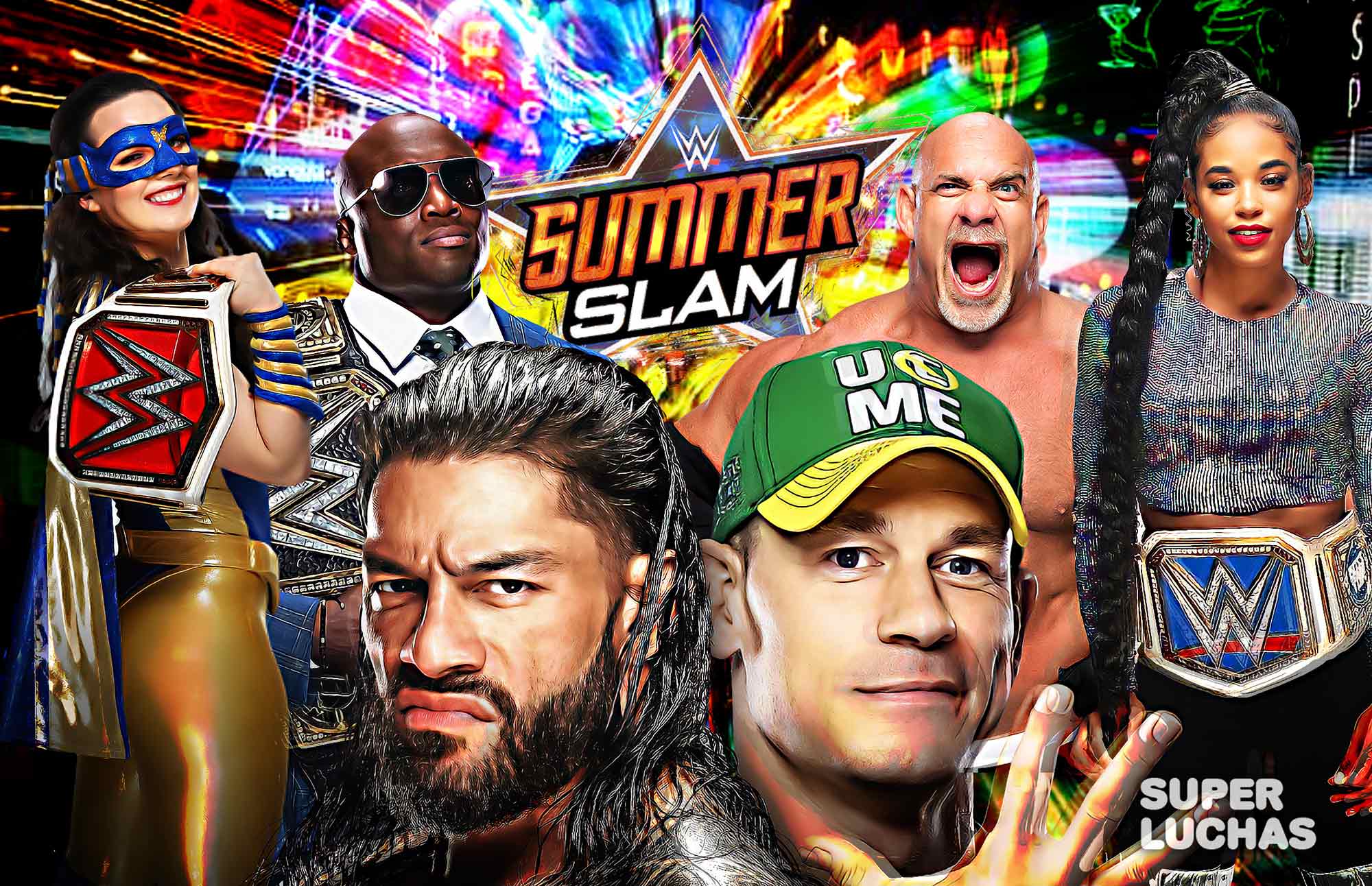 And the SummerSlam kickoff began with Kayla Braxton, accompanied by Jerry Lawler, Booker T, Peter Rosenberg and Kevin Patrick, who welcomed the WWE Universe. Then they gave a brief review of tonight’s poster. 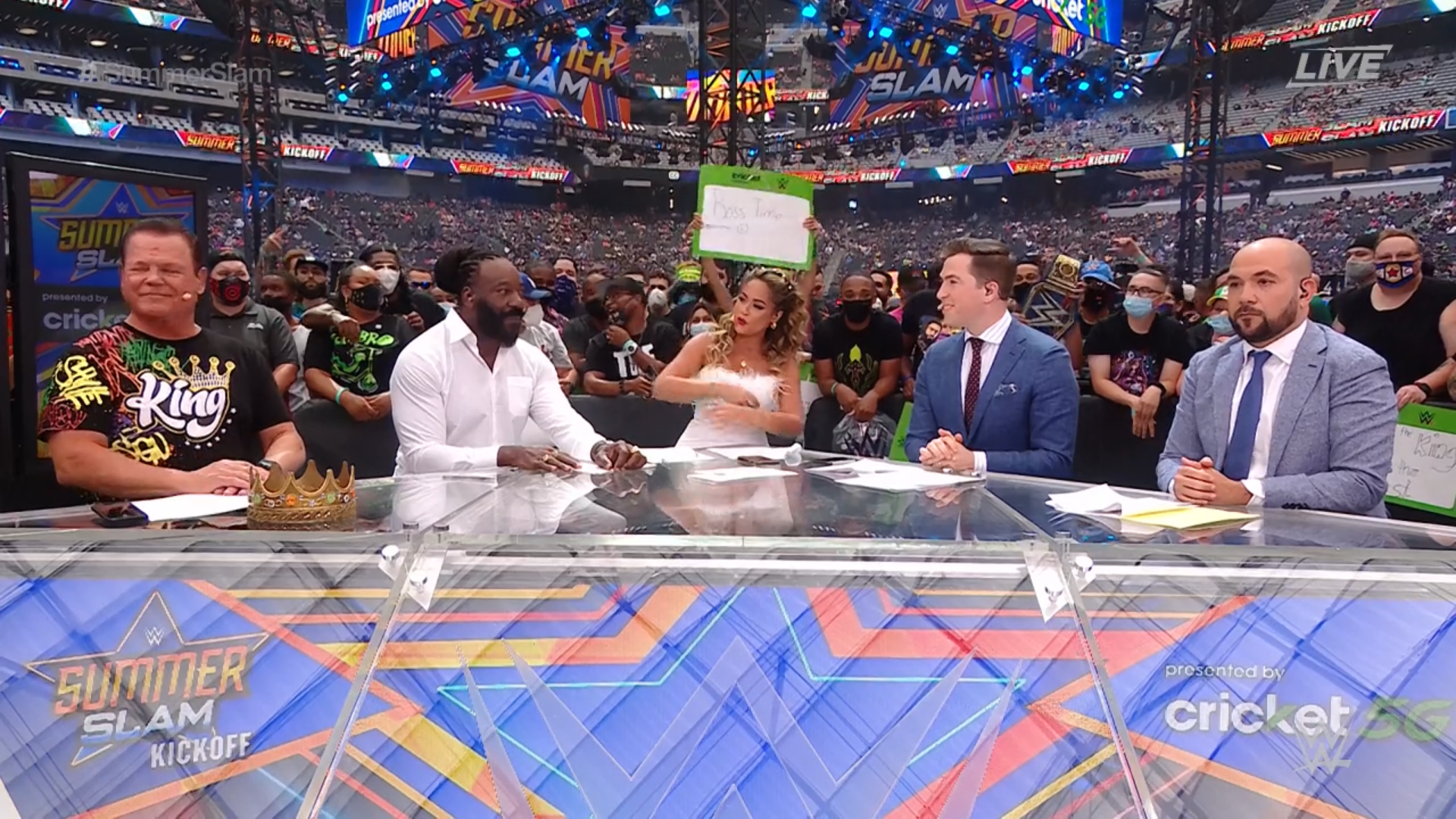 First, the rivalry between Bobby Lashley and Goldberg, who will contest the WWE Championship, was reviewed, and the panel shared their impressions.

Additionally, it was announced that Big E will face Baron Corbin in the kickoff of the event.

JUST ANNOUNCED: @WWEBigE is out for retribution against the man who stole his #MITB contract, @BaronCorbinWWE, on the #SummerSlam Kickoff show!

Then, it was the turn to review the rivalry between Bianca Belair and Sasha Banks, with the SmackDown Women’s Championship at stake. Sonya Deville joined the panel and also shared her impressions of this match which, despite rumors of Sasha Banks’ absence, was still scheduled. 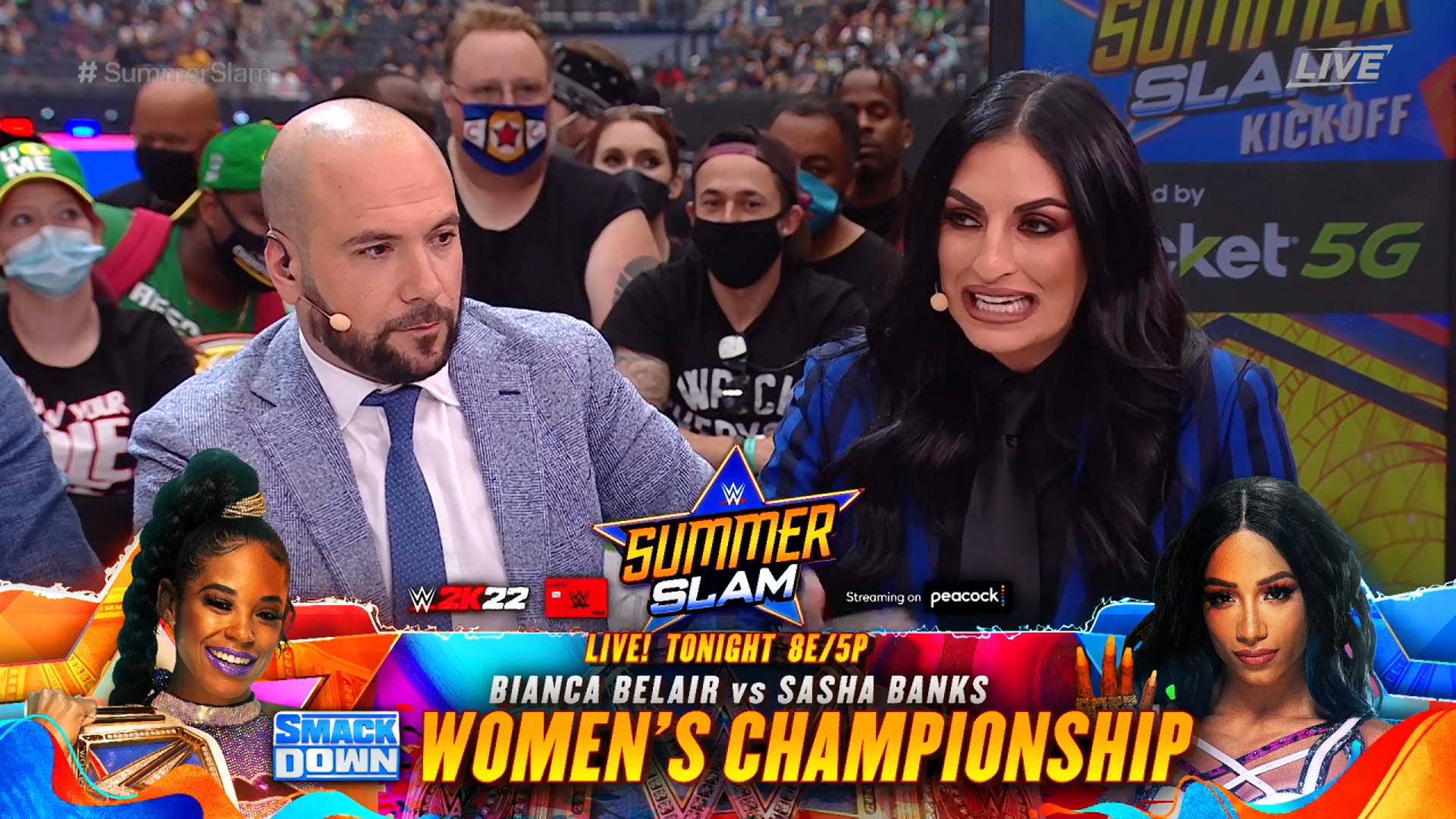 The panel went on to comment on the fight between The Usos and the Mysterios, for the SmackDown Couples Championship. Then it was the turn of the rivalry between Edge and Seth Rollins, whose impressions were shared by the panel.

The Raw Women’s Championship rivalry between Nikki ASH, Rhea Ripley and Charlotte Flair was reviewed below. Then, The Miz and John Morrison appeared with a truck and the first indicated that inside it there was a surprise for the WWE Universe. 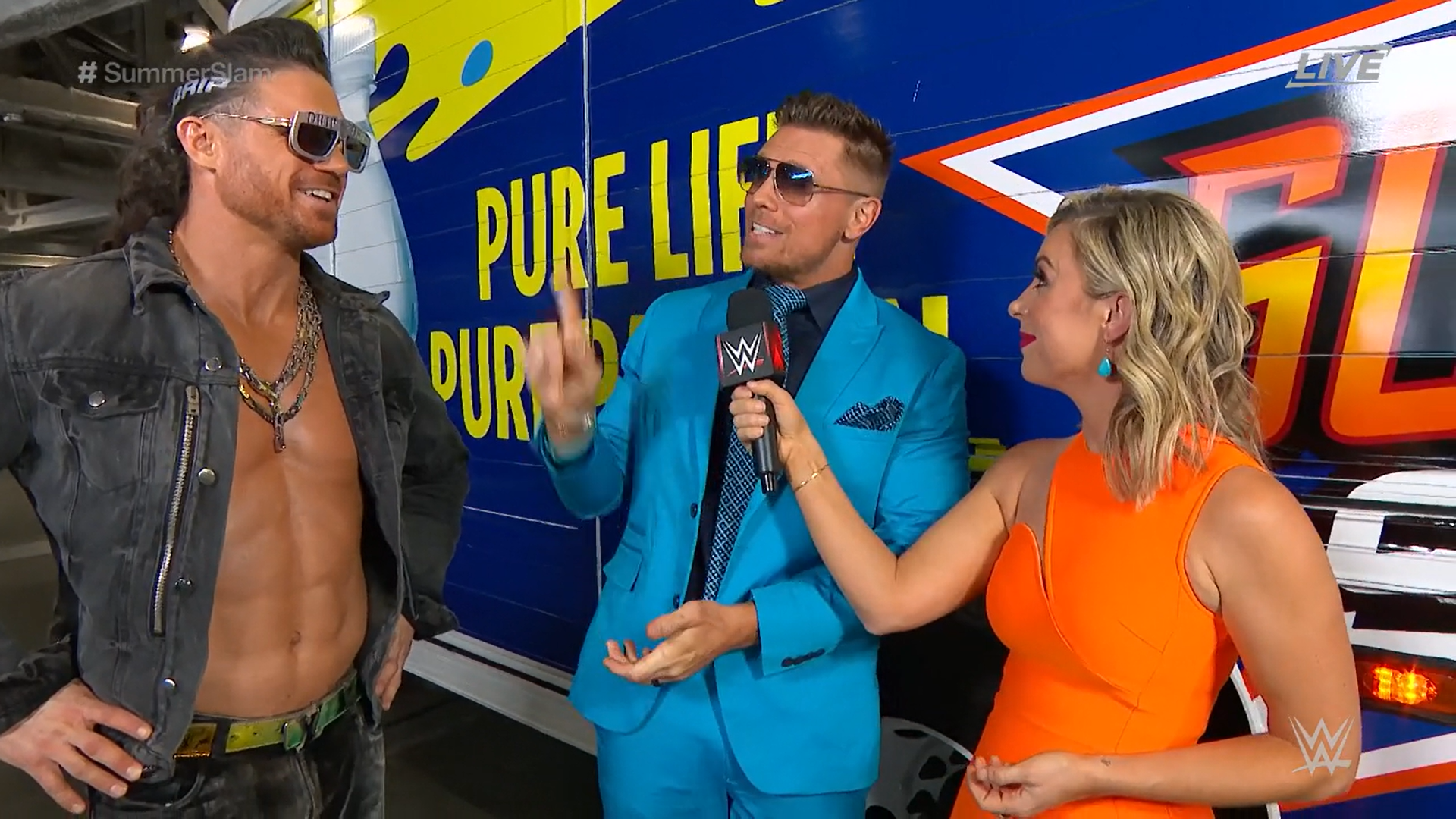 Finally, the match that was scheduled for the kickoff occurred. The announcement of the wrestlers was made by a fan who won a contest organized by WWE on TikTok. 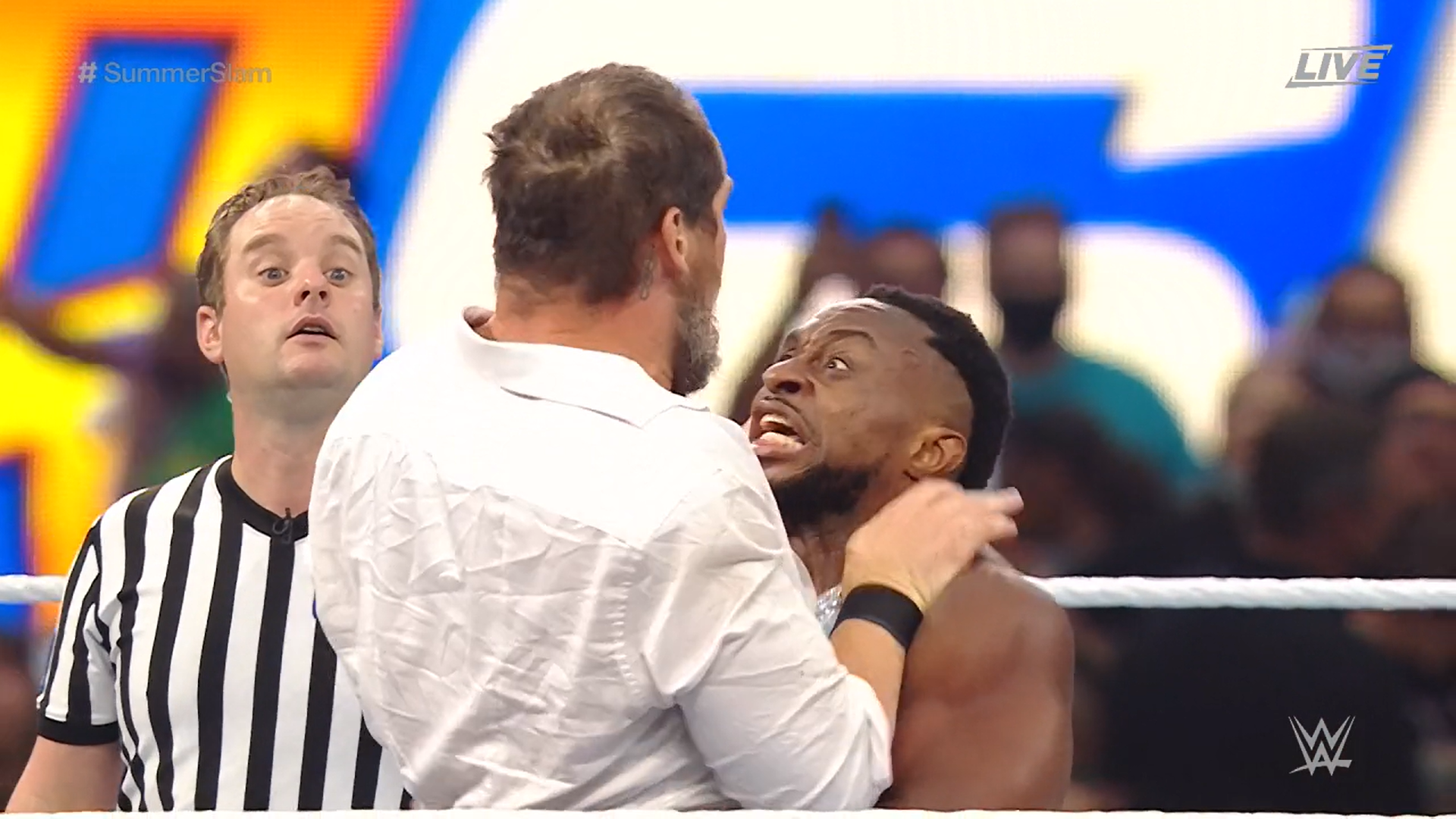 It wasn’t announced long ago, but it made some sense given the latest developments. Baron Corbin has possession of Big E’s Money in the Bank briefcase and he will surely want to get it back after defeating him. Thus, the former Intercontinental Champion began attacking with everything, although an iron failed against the edge of the ring, and Corbin took the opportunity to mount his offense with hard blows, but not even the Deep Six served him to take the victory. Failing to achieve success, Corbin decided to take the briefcase, but Big E stopped him and finished him off with a spear out of the ring.

Big Ending and this is over 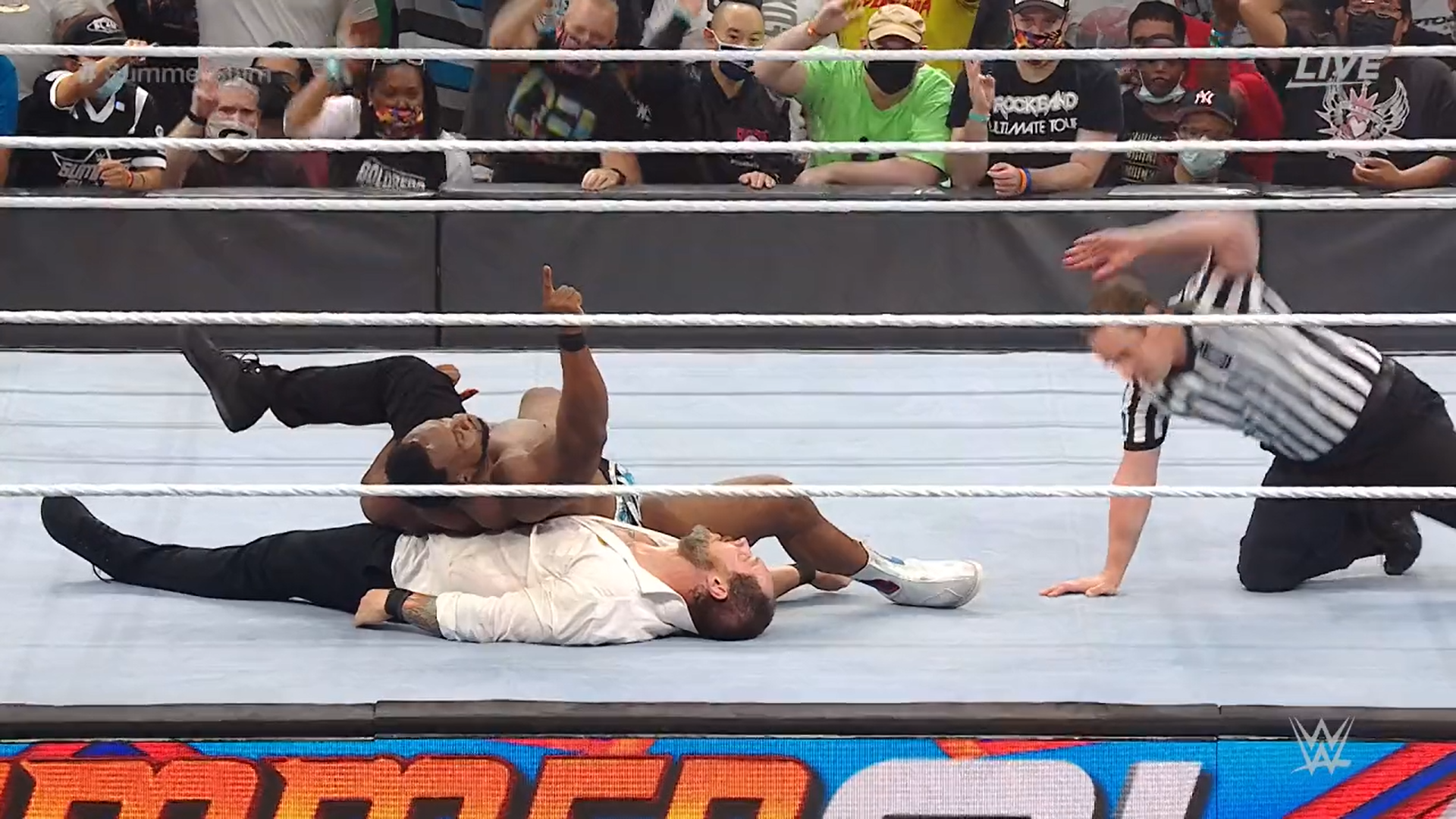 After the match, Big E finally got his briefcase back. Also, Logan Paul was in the audience, but was booed when the cameras focused on him. 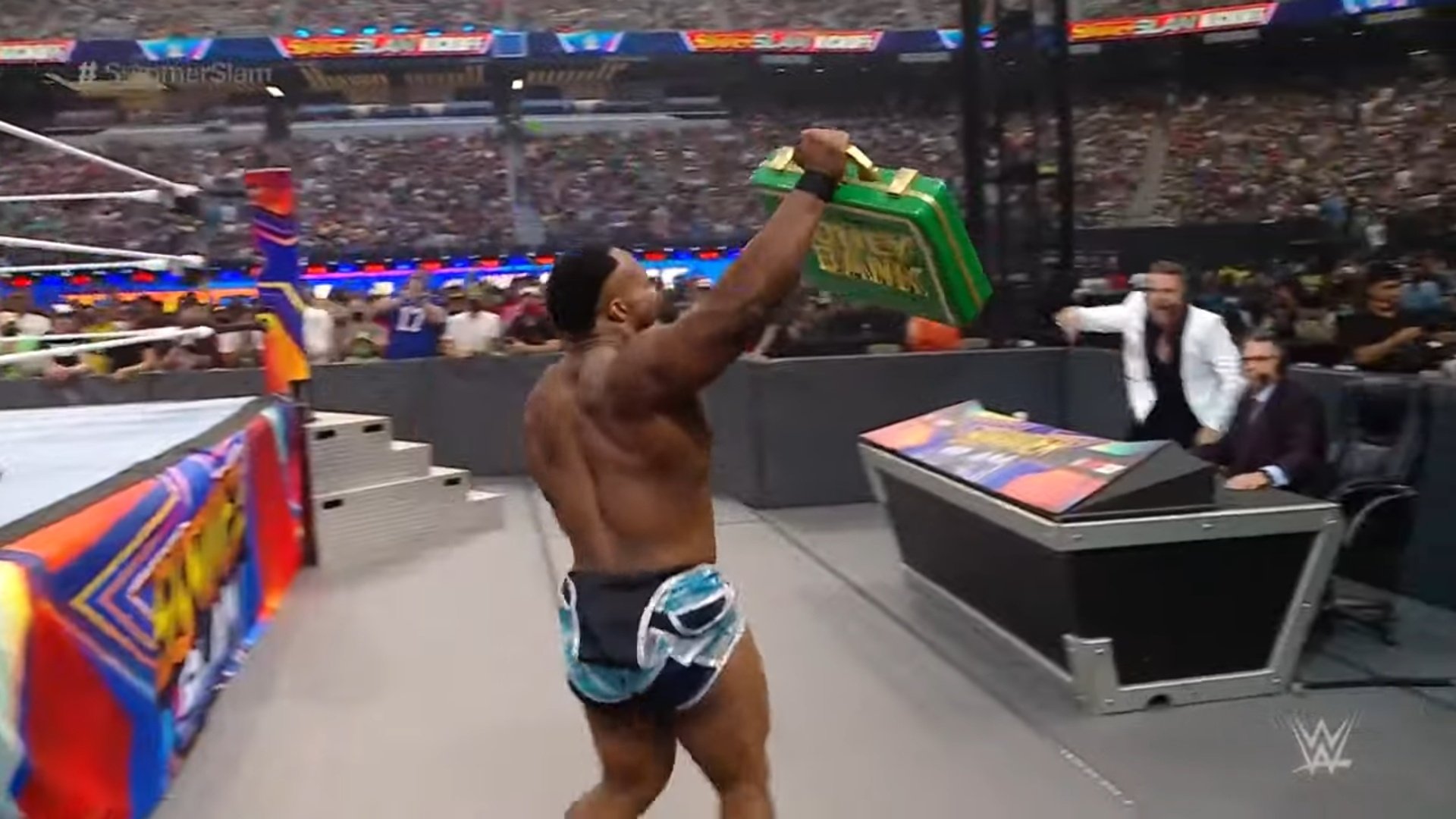 We went back to the kickoff and reviewed with a promotional video, the rivalry between Roman Reigns and John Cena, remembering that a victory for Reigns would practically ensure that he completed one year as Universal Champion. The members of the panel gave their predictions for this fight.

And with some final thoughts, the WWE SummerSlam 2021 kickoff concluded, announcing that the first match will be for the Raw Couples Championship. 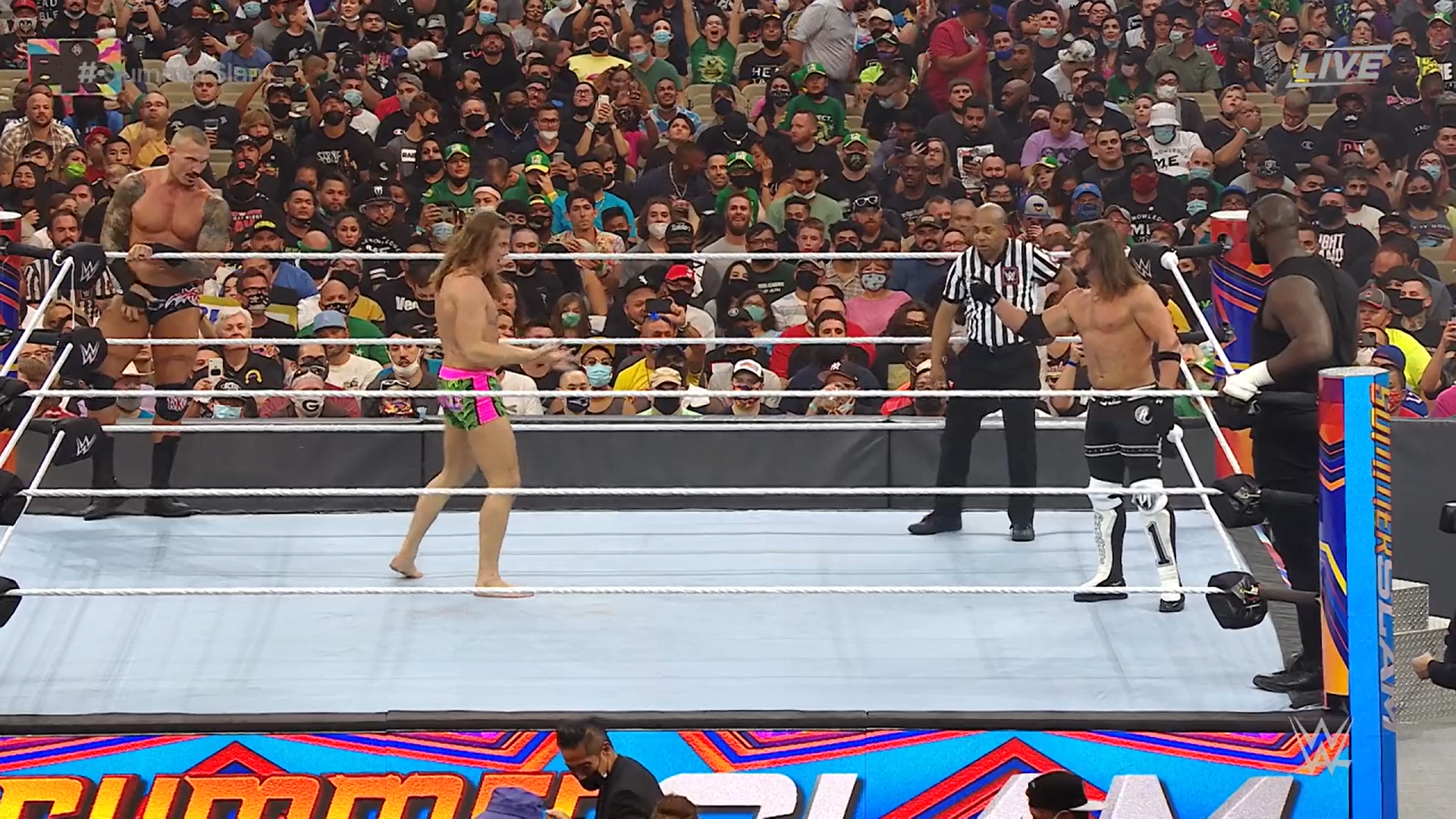 After so much insistence, Riddle finally got Randy Orton to team up with him again and his first test was nothing more and nothing less than this difficult challenge for the Couples Championship. The other story to follow was precisely the possibility or not of a betrayal within the RK-Bro. However, the match started in a good way for the challengers, who dominated Styles, who in turn got fed up and handed over to Omos to put things in order in favor of his team, taking advantage of his large size, although Riddle I tried to resist. However, he was prey for a while of the attacks of the champion couple, until Orton had the ‘hot tag’ and dominated Styles, but Omos managed to neutralize him to the RK-Bro, and began the exchange outside the ring.

Orton took advantage of the fact that Styles was battered and received him with an RKO and took the count of three. 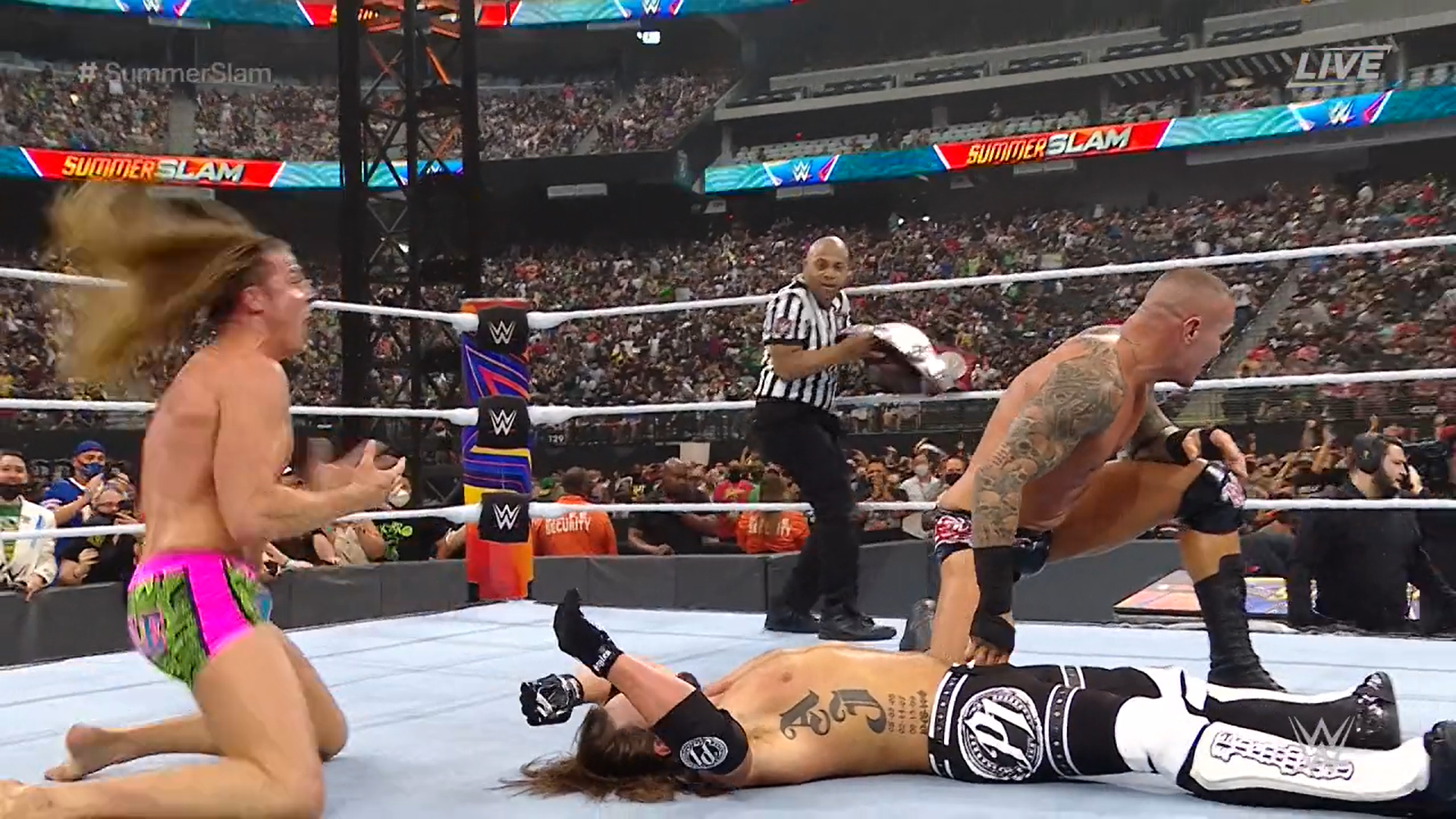