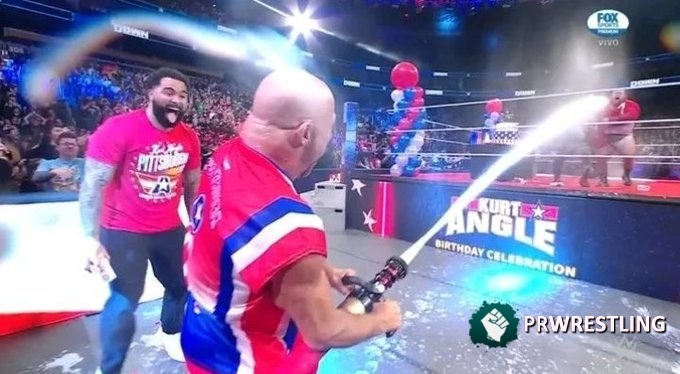 LA Knight came out to address Bray Wyatt. Another strange video of Uncle Howdy aired on the screen. After the video, Knight left to find Wyatt.

LA Knight searched for Bray Wyatt backstage. He went into the locker room and found a Bray Wyatt shirt. The lights went out. Knight pulled the phone from him and someone wearing a mask was standing behind Knight.


Back from break, Kurt Angle was having a party with a group of wrestlers backstage. Jason Jordan showed up with a birthday card for his dad.

Signature of the contract for the Intercontinental Championship Ricochet GUNTHER, who leaves with Imperium. New Day comes out and this leads to:

In the back, security was not letting Chad Gable and Otis into Kurt Angle’s party. The Street Profits were on the list and entered the party.

In the back, Sami Zayn and The Usos celebrated retaining the titles twice in one week. Jey was left alone with Zayn and pointed out that he should trim his beard and cut his hair. He added that Roman Reigns will appear next week. She hinted that Reigns would have a surprise for Zayn next week.

Angle goes out to celebrate his birthday and there is a cake in the ring. Alpha Academy walks out and Otis eats the cake. Steveson brings a milk truck and they spray milk at Otis and Gable in the ring, thus ending the show.