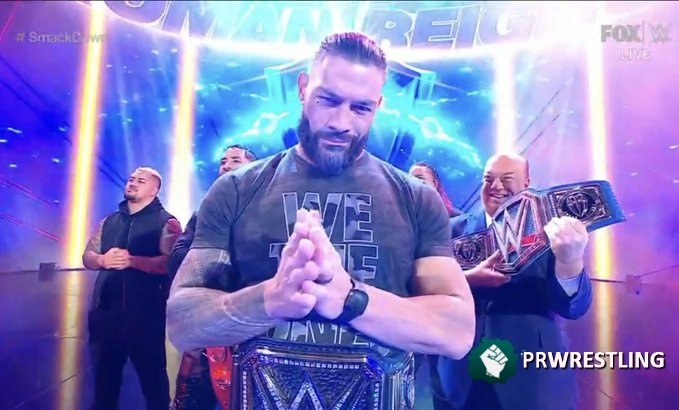 Megan Morant spoke with LA Knight in the back. She turned around and Bray Wyatt was standing in front of her. Wyatt said that he is sick of pretending that he is not proud of the horrible things that he did to people. Knight got in Wyatt’s face. Suddenly, an image appeared on the screen again. Wyatt tackled Knight and walked away.

Six Pack Match: Liv Morgan vs. Rachel Rodriguez vs. Shotzi vs. Sonya DeVille vs. Lacey Evans vs. Xia Li. Shotzi wins to be the new challenger.


Backstage, Emma approached Shotzi to congratulate her on her win. Shayna Baszler and Ronda Rousey approached Shotzi. Shotzi turned his back on Baszler. Baszler jumped on her and strangled her while Ronda insulted her.

After the fight Legado del Fantasma was waiting in the ring when Hit Row entered. The lights went out and the music of The Viking Raiders played. Erick, Ivar and Sarah Logan jump into the ring. They beat up everyone except Vega, who escaped into the crowd.


Roman Reigns, The Usos, Sola Sikoa and Paul Heyman entered the ring. They talk until The Brawling Brutes interrupt. Ridge Holland and Butch are tired of the Bloodline having the numerical advantage.

Sheamus then walks out, on his way back. He said something to Reigns, but his mic wasn’t working. Reigns taunted Sheamus for the microphone cut off. The Brawling Brutes jumped into the ring and a fight broke out.

Drew McIntyre ran out to save and even the odds. SmackDown ended with all eight fighting.