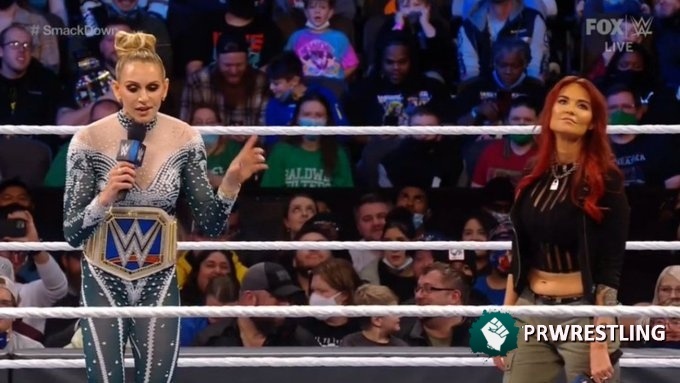 Smackdown begins with a segment on the Usos.

Jey noted that they beat The New Day last week, but they respect them. They noted that management set up a fatal 3way to determine their next challengers:

The Usos jumped onto the announce table and taunted The Viking Raiders.

Naomi approached Deville in his office. Naomi was furious that Deville interfered with her business last week. Deville threatened Naomi that she would lose her spot at the Royal Rumble or get fired if she touched her.

Zayn was upset that Knoxville thinks he could be a wrestler. Zayn ran back but came back in a shopping cart with two unnamed guys pushing him. They set up a ramp down the hall with the target/smash pad on the other side of the ring. Zayn pretended that he wanted to jump but in the end he didn’t.

Rick Boogs and Shinksuke Nakamura appeared out of nowhere. Boogs now has short hair and they made fun of Sami..

Aliyah defeated Natalya in a record time of 3 seconds.

Natalya attacked Aliyah before the match and brutally beat her around the ring. The referee asked Aliyah if she could continue, but she did not answer. They announced that she couldn’t compete, but Aliyah convinced the referee to change her mind.

The bell rang and Aliyah instantly trapped Natalya in a bundle for the win. After the match, they announced that Aliyah set a new record for fastest female wrestling at 3.17 seconds.

Charlotte Flair interrupted and headed to the ring. Flair mentioned defeating Lita’s friend Trish Stratus at SummerSlam. Lita pretended to slap Flair and Flair covered up. Lita then hit the Twist of Fate.

Sheamus defeated Ricochet. The end came when Ricochet went for a knee, but Sheamus landed a Brogue Kick in the air for the victory.

Adam Pearce and Sonya Deville discussed the rules of the Royal Rumble. Pearce and Deville were still hot, so Pearce went to find someone to help. Deville took off his jacket as Naomi entered the office. She noticed that Deville wasn’t wearing his jacket, so she could fight with it.

Roman Reigns and Seth “Freakin” Rollins in a Face to Face

Rollins tried to get Reigns to put out his fist like they did as The Shield. Reigns said that’s below him now. Rollins noted that Reigns did not win the title on his own. First, he needed The Shield, and now he needs The Usos.

Reigns said that if he wanted to face a megastar, he would have chosen Rollins’ wife. Suddenly, the Usos try to attack Rollins, but he was able to dodge them to end the show.