WWE SMACKDOWN OCTOBER 22, 2021 .— Crown jewel was left behind, and as of this Friday the changes seen in the Draft will be effective. Fighters like Drew McIntyre they will make SmackDown their home, and new rivalries will be born. But the one who seeks to stay as supreme chief is Roman reigns, especially after defeating Brock Lesnar. A new era begins tonight. The action of the blue mark of Wwe is issued from INTRUST Bank Arena, on Wichita, Kansas.

While the queen of the ring, that is, the owner of the Queen’s Crown, Zelina vega, is on Raw, the winner of King of the Ring is Xavier Woods, and he will make Friday night his palace. What surprises will Woods bring us in this new stage as king? Will it affect or benefit Kofi kingston?

Roman Reigns opened the show and arrived alongside Paul Heyman, and immediately questioned what he did yesterday at Crown Jewel when he threw the title between him and Lesnar, instead of giving it to him.

After receiving the title from Heyman, he told him that he was good at his job and that he has been carrying the company behind his back for a year and a half. Then, he referred to Brock Lesnar and the words he said on social networks after losing at Crown Jewel, and invited him to appear in the ring, but asked that the public recognize him. 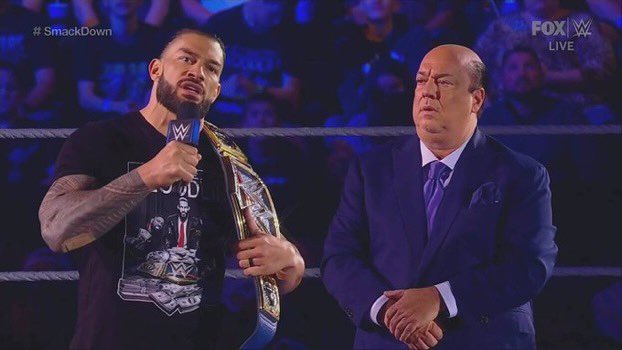 Reigns decided to wait until Lesnar appeared, which did not happen, although the public asked Lesnar in unison, while Reigns said that he was afraid of him. And when he was leaving, Lesnar appeared and immediately launched himself on the attack in and out of the ring, while Heyman looked scared.

Lesnar took a metal ladder and attacked Reigns with it, but when he was going to apply the F5, the Uses arrived, although Lesnar sent them flying. Reigns rejoined, but was crashed into the post. Some officers and other fighters arrived, but Lesnar looked unstoppable, while Reigns and company fled. Pearce tried to make him see reason and Lesnar took the title and held it up high.

I love this new side of Lesnar #SmackDown

Pearce addressed the public and said that Lesnar’s actions were totally unacceptable, and because of that, as long as he is in charge, he is not going to allow this to happen again and indefinitely suspended Brock Lesnar.

Lesnar wasted no time and returned to intimidate Pearce, who confirmed the suspension. Lesnar, furious, applied a pair of F5s to Pearce, whose pants ripped. Then, he taunted the officer and left.

Backstage, Naomi faced Sonya Deville and asked for a fair fight, and she accepted. McIntyre introduced himself to him and asked to go to the ring to launch an open challenge for the brave who wants to face him.

McIntyre took the mic and demanded that someone appear and Sami Zayn appeared and reminded him that he is the oldest Superstar on SmackDown and accepted the challenge.

Forty-two minutes of the program have passed to finally have the first fight, and Sami tried to play the psychological one on McIntyre who came to the blue mark with all the desire to end everyone, and it did not take long for him to put the hands on and he managed to dominate at will, until he found an opening and slammed his rival into the post. However, he wasted a lot of time making fun of his three, two, one.

McIntyre took advantage and hit a Claymore to win.

It was time for the coronation of King Xavier Woods, and he was presented by Kofi Kingston, who put the cape on him and the public told him that he deserved it. Then, he awarded him the scepter and the crown.

The new king took the microphone and thanked the WWE Universe. Kofi asked the public to cheer for King Woods, as they both celebrated in the center of the ring.

And this was the rematch of Crown Jewel, and the premiere of both in the blue brand in this new season. Ali wanted to surprise from the start but missed an attack and Mansoor took control and already looked grown after his victory at Crown Jewel, although they eventually had a trade and both came close to victory.

With a vine, Mansoor achieved victory

Hit Row made an appearance and they officially debuted on SmackDown. Each of its members appeared before the public. They also debuted in the ring.

Swerve and Top Dolla are the ones who saw action, and it was Top Dolla who, after being attacked, handcuffed their rivals.

Combination between Swerve and Top Dolla to kill the one with red trusses.

Hit Row victory, squash for 2 local fighters (or so I think), good debut in #Smackdown

Sonya Deville was interviewed and said that Pearce was targeted because he decided to do things his own way. Then, he referred to the fact that he will have – alone – to handle the exchange of Championships between Becky Lynch and Charlotte Flair.

And the rivalry – very long – between the two materialized here. Corbin was drunk and was looking to make life impossible for the Intercontinental Champion. Boogs and Moss accompanied at ringside. Corbin started cornering Nakamura against the cornerback, but the Japanese evened the matter using his legs and Boogs began to sing his electric guitar, but Corbin took a second breath and pulled him out of the ring. Nakamura returned and the action evened out, as Boogs began to sing the guitar, although Moss came to ‘shut him up’. Nakamura was distracted but forgot about Corbin, who slammed him against the metal stairs.

Corbin finished this off with an End of Days

Charlotte Flair said she is not going to give her the title and told Becky to give her hers.

And it was time for the announced title exchange. Becky Lynch appeared first in the ring and then Charlotte Flair did. Sonya Deville cut to the chase and said that the two should exchange their titles to represent the correct brand, although neither wanted to be the first to hand it over.

After a bit of animosity, the exchange finally came off in a bad way, and Charlotte came up with the idea of ​​the winner taking it all.

However, Sasha Banks interrupted and said that she is the one who will command on SmackDown. Becky said she let them figure it out and that she will wait for the winner at Survivor Series.

Sasha said she’s the boss on Friday nights. Charlotte reminded her that she is the champion, but Sasha attacked her with everything and Sonya Deville came to separate them.