WWE SMACKDOWN NOVEMBER 19, 2021 .— Two days from Survivor Series, the construction of the PPV has been plagued with internal conflicts instead of joining each brand to face the opposite. And in this episode of SmackDown, we will see two of the members of the women’s team fight: Sasha banks and Shotzi, who are in rivalry because Banks cost Shotzi a win over Charlotte flair. Whatever happens, both will have to ally this Sunday with Shayna baszler, Natalya and a fighter to define. The action of the blue mark of Wwe is issued from XL Center, on Hartford, Connecticut.

And continuing with Survivor Series, this Friday Sonya deville will reveal who will take the places of Sami zayn (in the men’s team) and Aliyah (in the women’s team).

Also, we will know what you have to say Roman reigns before the warning sent by Big E Monday on Raw after he stopped in his tracks Hey use and Jimmy Uso, emissaries of the Universal Champion.

The Usos opened the show in the center of the ring and told Big E that on behalf of The Bloodline they left a clear message last Monday on Raw and that in Survivor Series they will be victorious. And with a throne waiting, they called Roman Reigns, who appears.

Heyman was dedicated to praising Reigns in his speech and called him “Tribal King Roman Reigns”, adding that that qualifier of “King” no longer belongs to Xavier Woods, nor will Roman Reigns and Big E, who will defeat this Sunday at Survivor Series. 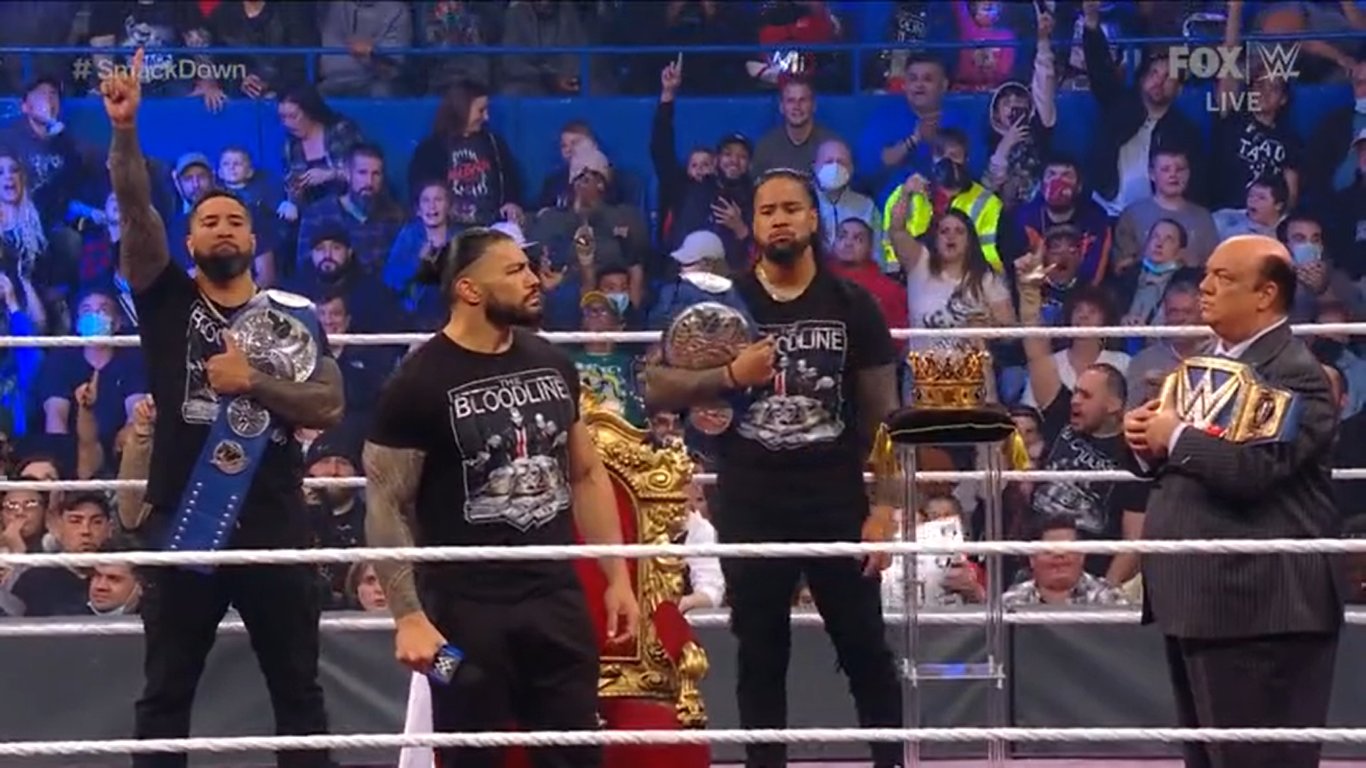 Reigns looked outraged and said that he does not need thrones or crowns to be recognized, and asked the public to recognize him. King Woods showed up and told him that while the things in the ring belong to him, they don’t make a king.

Woods challenged Reigns to a head to head and he ordered to stomp on the cape, damage the scepter and the saddle, but when he was going to damage the crown, Woods came to the ring only to be attacked by the Usos. Reigns told Woods that he is the only king and tramples on his crown before concluding with his humiliation.

But well Roman taking the crest out of Woods, what a good start #SDCL #SmackDown

King Woods said, all hurt, that he still wanted to face Roman Reigns at the end of the night, if he decides to accept his challenge.

1. Ricochet vs. Cesaro vs. Sheamus vs. Jinder mahal

Sheamus was fighting for the first time since he was selected by SmackDown in the last Draft and this meeting had implications for this Sunday’s PPV, since its winner would replace Sami Zayn on Team SmackDown. It is a all against all and a clear dominance was not seen at the beginning, until Sheamus and Jinder Mahal were in the ring, and then it was Ricochet who with a spinning top impacted his three opponents. Eventually they started the auction festival, but no counting was successful. Ridge Holland appeared and distracted Cesaro.

With a Brogue kick from Sheamus on Cesaro, he concluded this.

Ridge Holland is here! I see you wrong, Cesaro.

Go scoring the triumph of Sheamus. Habemus fifth member of #SmackDown for #SurvivorSeries

Ridge Holland and Sheamus celebrated in the center of the ring and Team SmackDown was complete.

Jeff Hardy was interviewed and asked about his fight this Sunday at Survivor Series. He highlighted the characteristics of his teammates, but came Happy Corbin and Madcap Moss. Adam Pearce arrived and claimed Corbin and Moss, arranging a match between the latter and Jeff Hardy.

Sheamus and Ridge Holland were very euphoric backstage and the latter offered his support to the Irishman in case anyone wants to mess with him.

We had a promotional video of the rivalry between Becky Lynch and Charlotte Flair, who will face off in a champion versus champion match this Sunday at Survivor Series.

2. Aliyah and Naomi vs. Shayna Baszler and Natalya

After the events of last week, which meant Aliyah’s first victory in her debut in the blue brand, and she started with good rhythm, but when Naomi entered, she was dominated in a two-on-one by Natalya and Shayna.

With a quick count from Natalya on Naomi, the match ended

You can only define this fight in one expression: