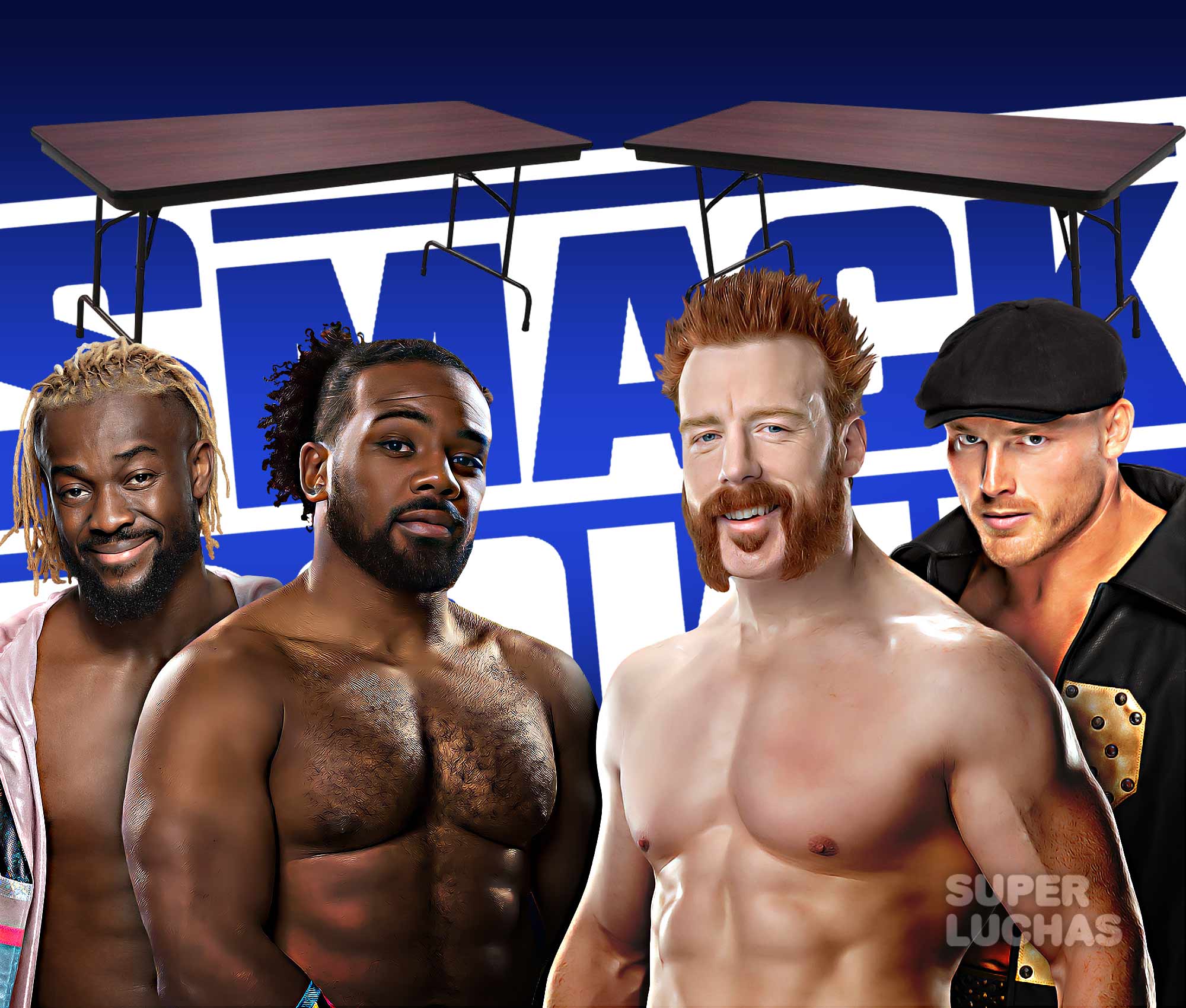 WWE SMACKDOWN MAY 6, 2022.— Sheamus Y Ridge Holland have been in rivalry with The New Day since March, when Big E was seriously injured. Later, the rude defeated Kofi Kingston Y Xavier Woods in Wrestlemaniaand since then they continue to face each other. On the SmackDown on April 29, Sheamus beat Kingston, while Woods beat Holland. Now, both couples hope to put an end to the rivalry with a months-long fight that is expected to be brutal. The action of the blue mark of WWE is issued from Nassau Veterans Memorial Coliseumin Uniondale, New York.

A couple of weeks ago, Natalie Y Shayna Baszler they challenged Sasha Banks Y Naomi for him WWE Women’s Couples Championship. Derived from this, in last Friday’s episode, Naomi unexpectedly defeated Baszler. This Friday, Banks will be the one to face Baszler, and if he repeats the defeat, the challengers will remain no arguments to aspire to the throne.

Charlotte Flair came to the ring and Aliyah was ready for her match. The Queen reminded Aliyah that she made her surrender before time was up and that will be the fate of Ronda Rousey on Sunday at WrestleMania Backlash. 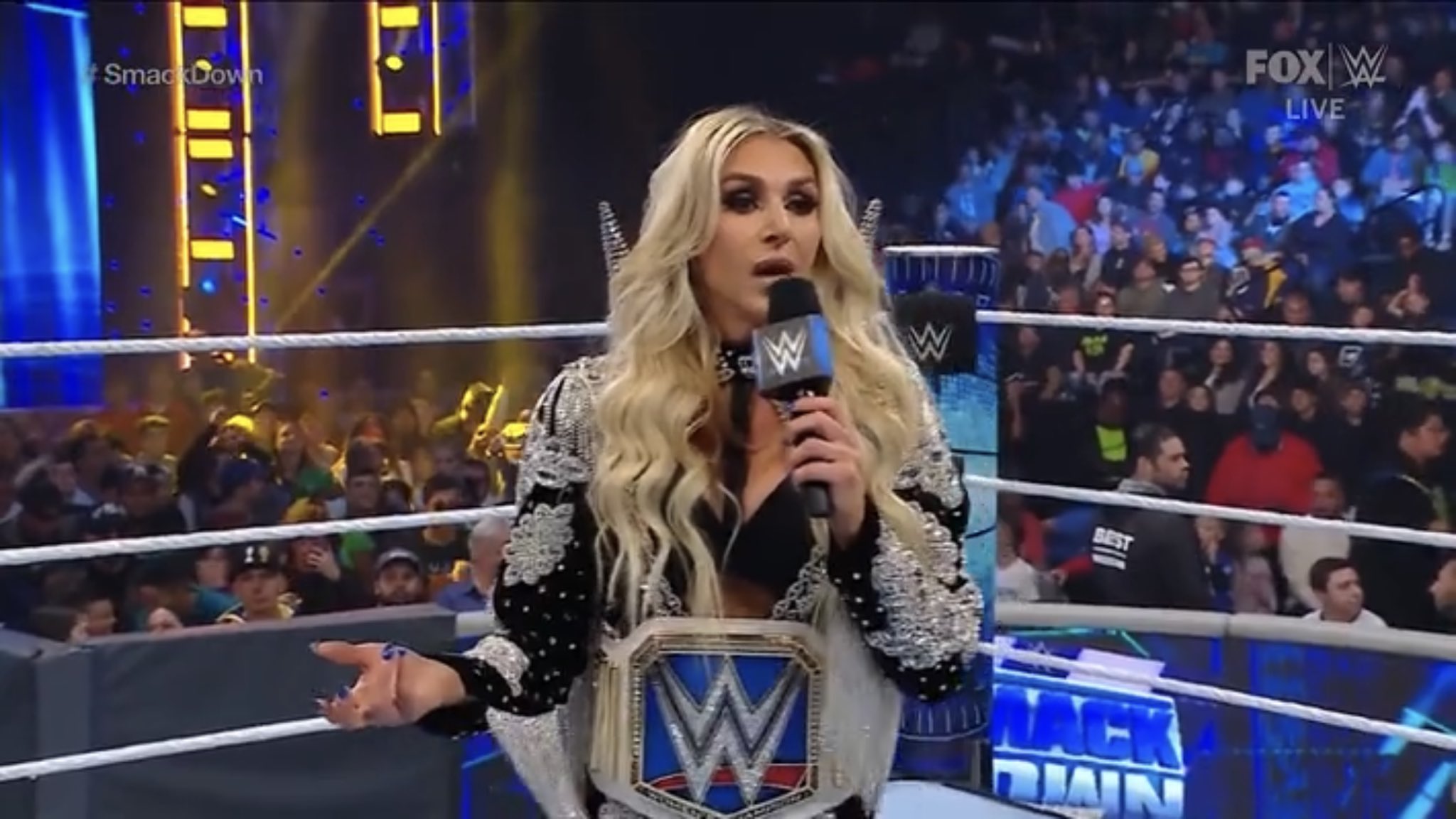 Then, he went to who was going to be his rival and attacked her before the bell rings, imagining that she is Ronda, and she appeared to take over the SmackDown Champion.

Champion and challenger continued to attack each other and several officers came to separate them, although without success. 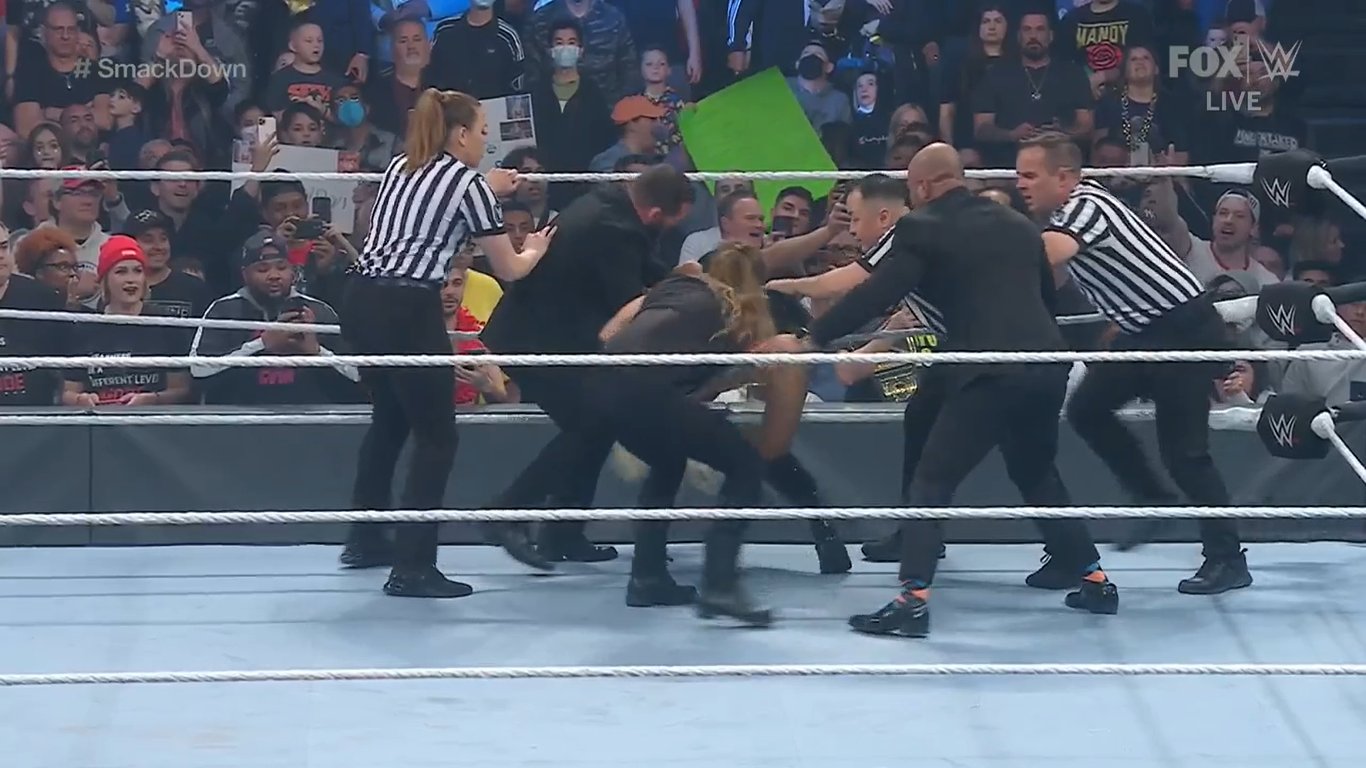 And yes, there was no match between Aliyah and Charlotte Flair. 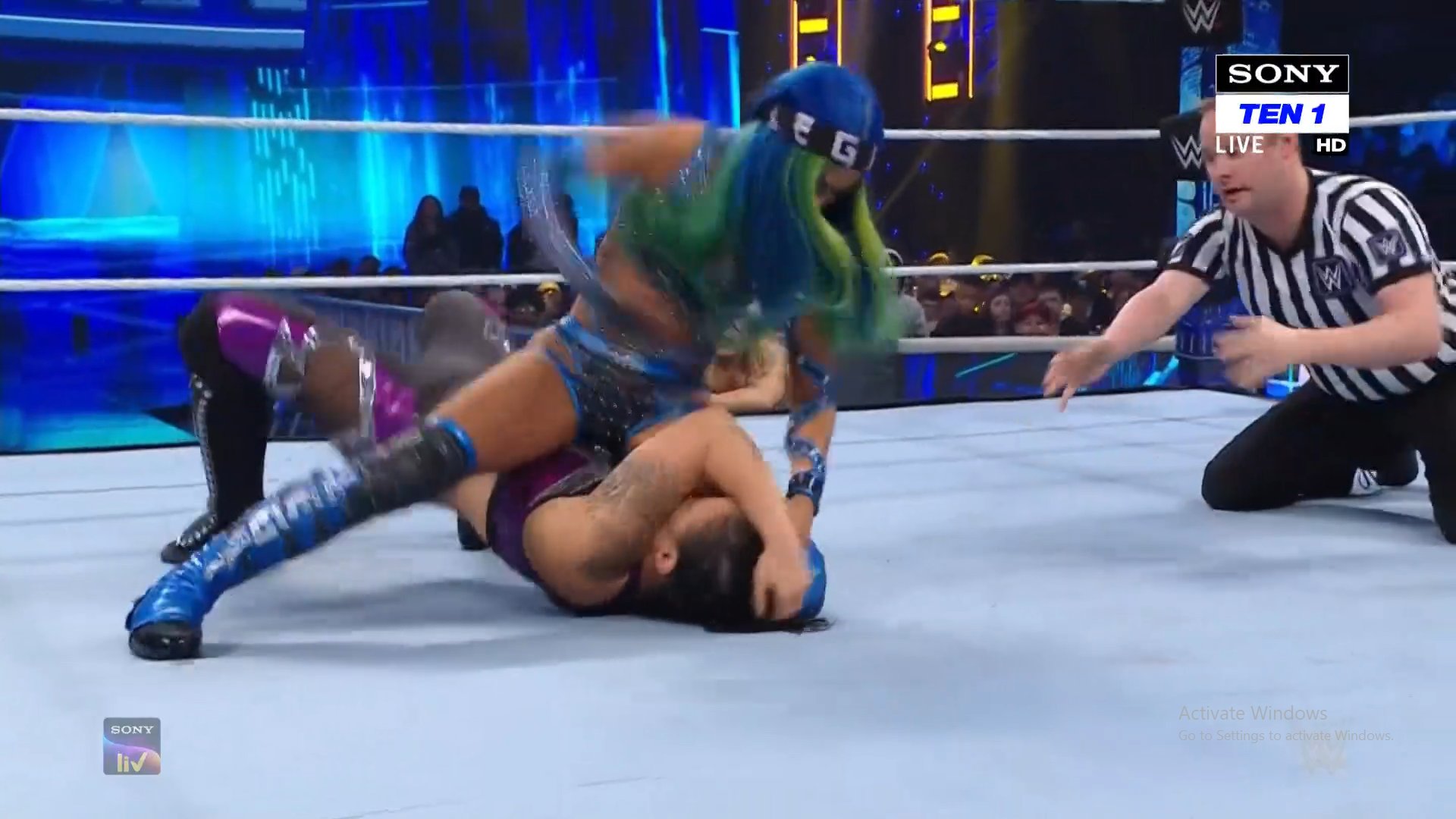 Despite the fact that these two teams will not meet at WrestleMania Backlash, the rivalry continues with two individual matches and it is The Boss who was looking to apply a punishment in the pure style of Shayna, who also showed that she can hit hard, and after the commercial break, Sasha was dominating until Natalya intervened on her partner’s behalf.

With a vine and assistance from Natalya, Shayna achieved the victory

After the fight, Natalya and Shayna looked to slaughter Sasha, but they recovered and Natalya was the one who took the worst part. 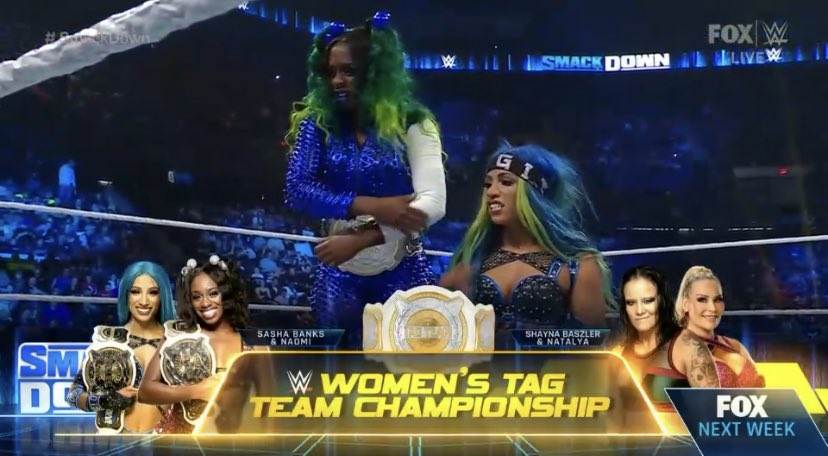 Behind the scenes, The Usos were interviewed and said that RK-Bro did not scare them and this Sunday they will demonstrate it at WrestleMania Backlash. 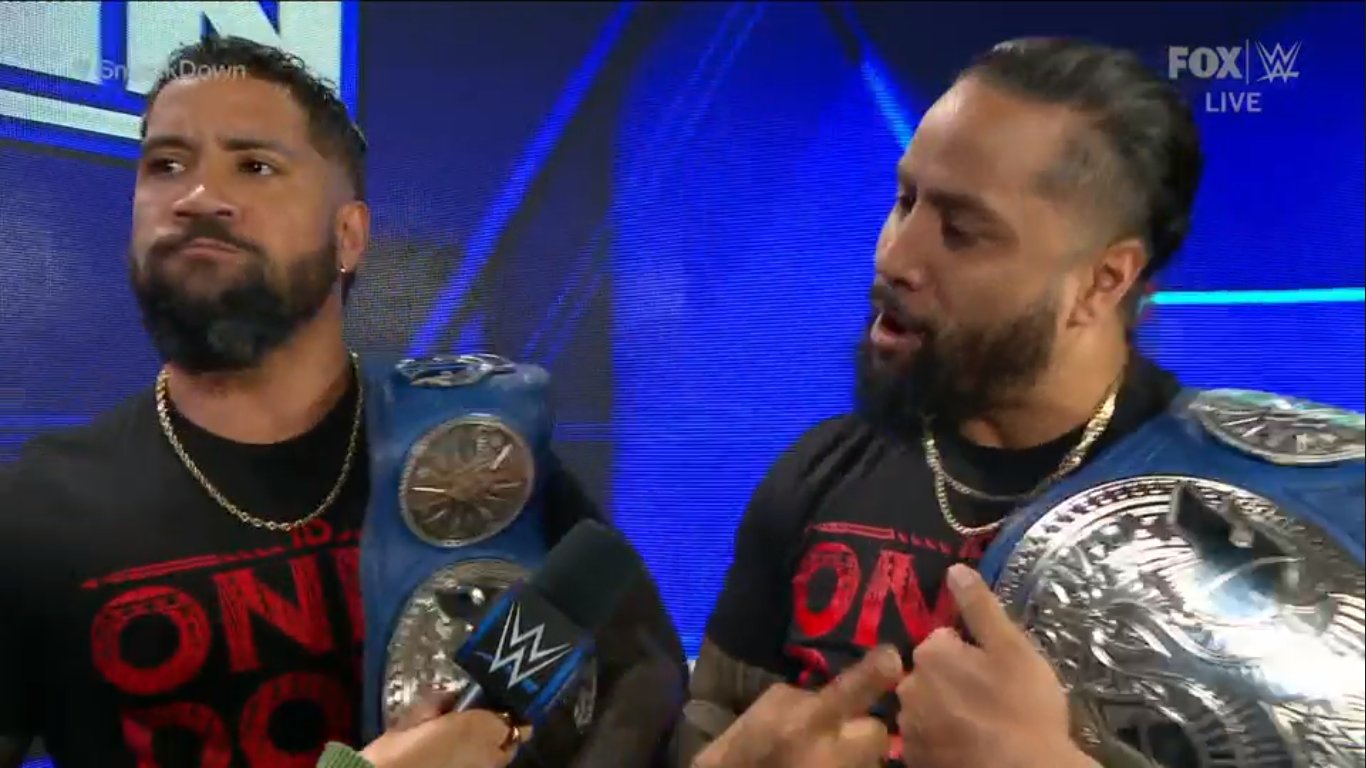 The Raw Tag Team Champions were also interviewed and said that The Usos only know how to talk.

Happy Corbin arrived for his Happy Talk segment and said that he is so happy thinking about what he will do to Madcap Moss at WrestleMania Backlash. Moss appeared on the big screen to taunt Corbin with some jokes. 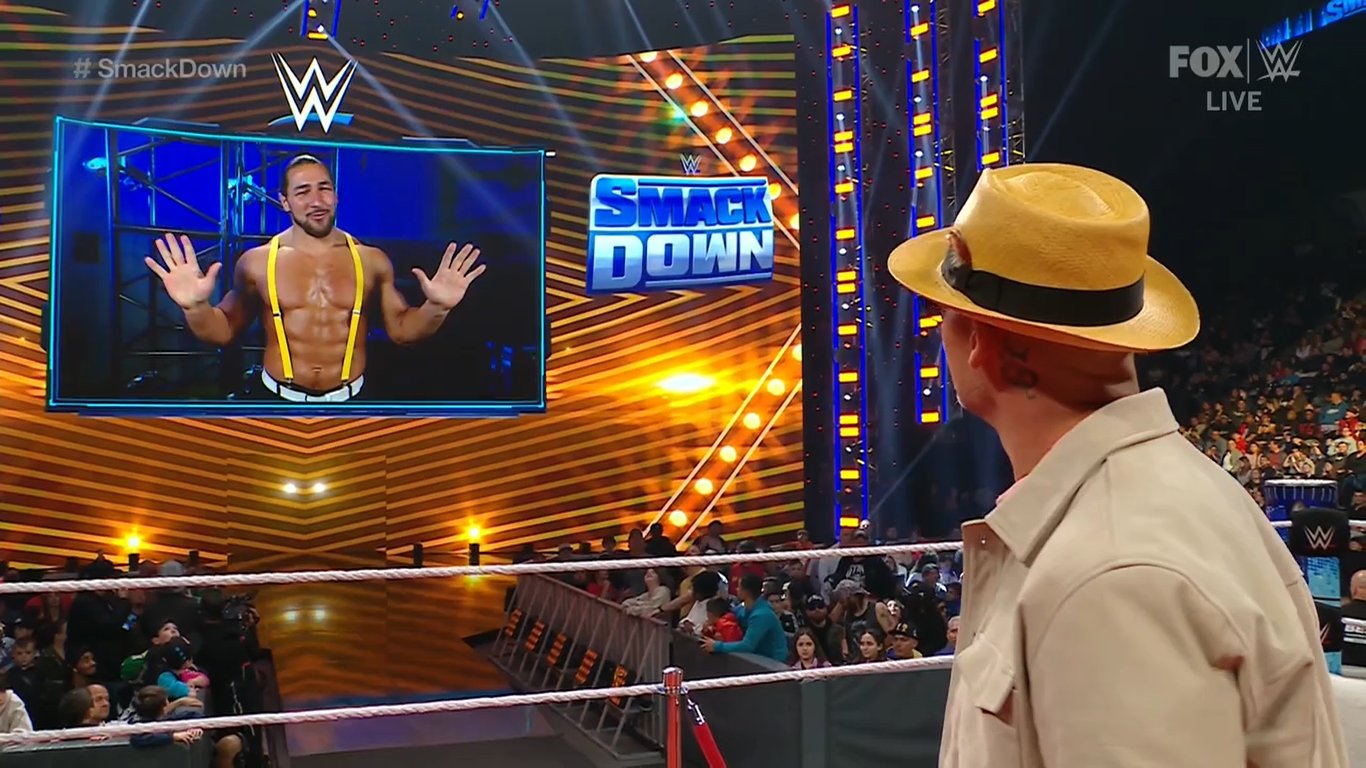 Corbin told him that Moss was lucky to be away, but Moss decided to show up and confront him, continuing to make fun of his appearance, calling him “Big Bald Wolf” with the help of the audience. 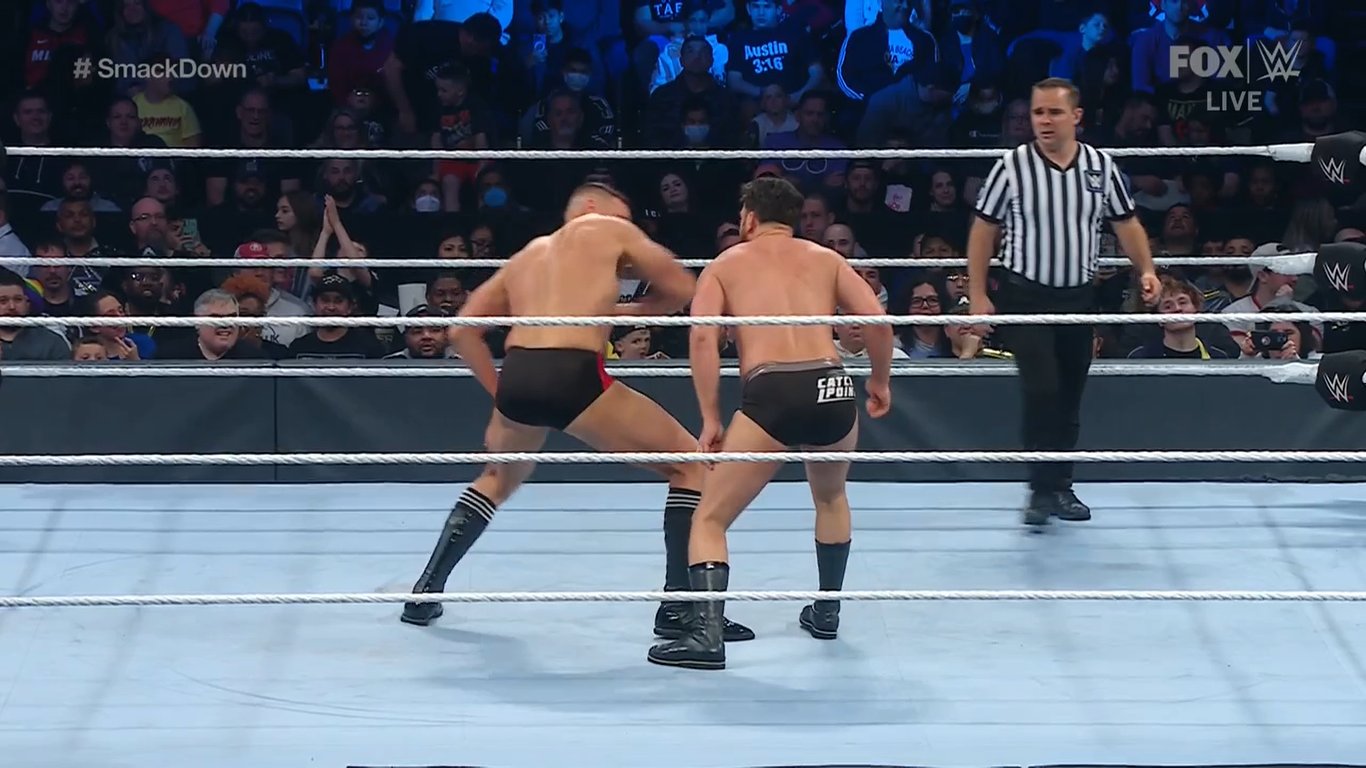 After failing his auditions as an interviewer and bell ringer, Gulak returned to his role as a fighter, but only to face off against Gunther and his face changed greatly. Still, he tried to impose the conditions on him, although Gunther solved everything with a machete, followed by a Big Boot and another machete. Gulak didn’t do much from there.

Sleepyhead and Powerbomb and it’s over. 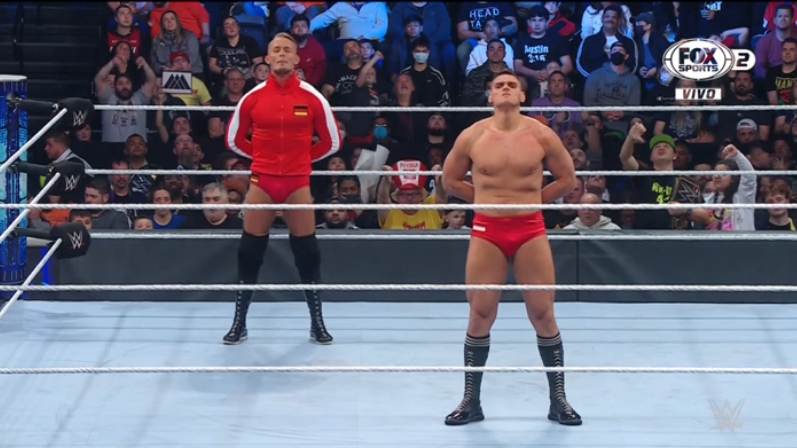 Those machete blows from Gunther were heard here at the door of the house, DOLOOOORRRRRRRRR #SmackDown

Shinsuke Nakamura was interviewed behind the scenes and said that he has not forgotten The Bloodline and that one day he will take it out on Roman Reigns for what he did to him.

Drew McIntyre was interviewed to promote this Sunday’s match and promised to rip Roman Reigns’s head off there. 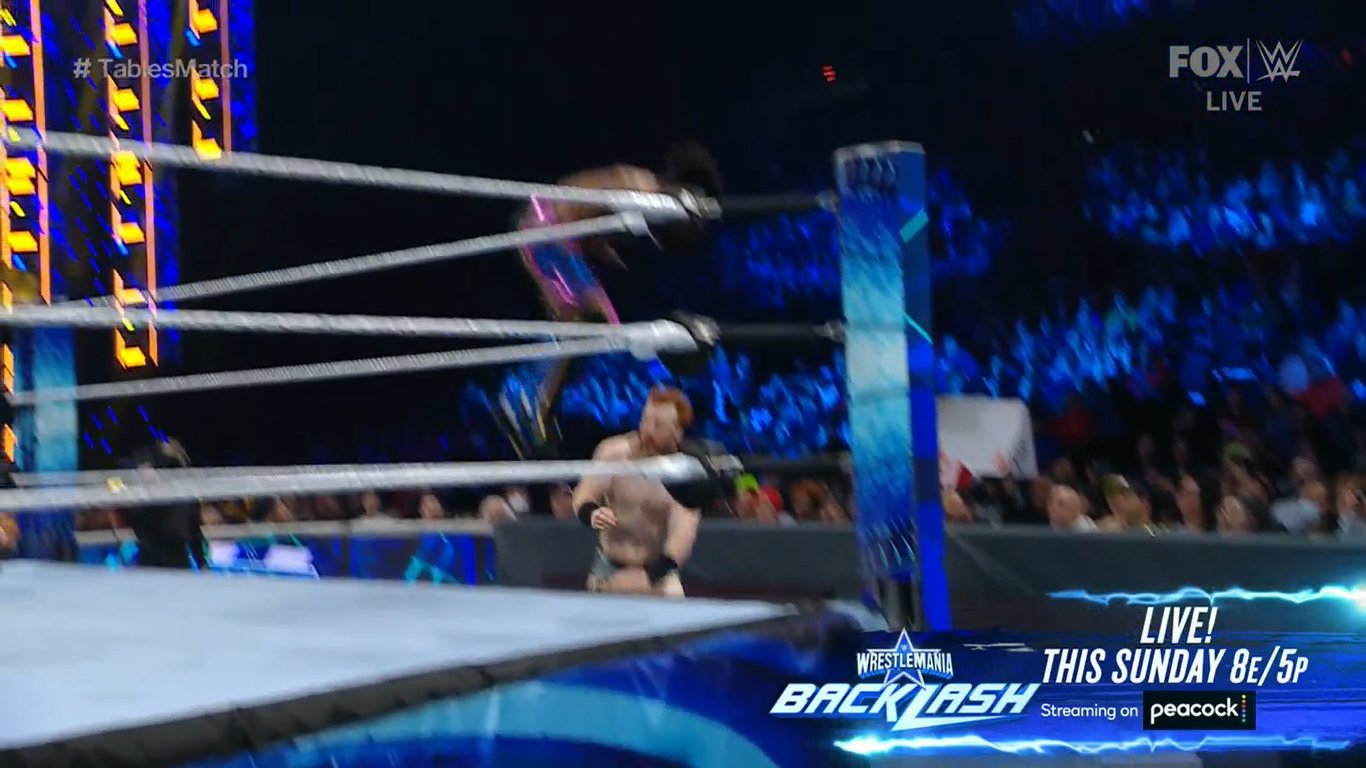 3. Table fight: Sheamus and Ridge Holland vs. The New Day

The rivalry between these two teams has been going on too long, to the point that they didn’t even wait for the bell to start. Each grabbed their opponent, Xavier Woods with Sheamus and Ridge Holland with Kofi Kingston, and the action was fairly even, with neither setting up a table yet. Eventually, New Day managed to put one together in the ring and almost took the win, but Sheamus cleared the table in time. Still, Xavier Woods managed to fly out of the ring and slam Sheamus into the barrier and was really on fire during the match and had Holland ready on a table, but Sheamus came back to save his partner. Kofi set up the announce table and placed Sheamus there, but Butch appeared from below the ring and managed to intervene on his teammates’ behalf.

Sheamus and Ridge Holland threw Kofi onto a table. 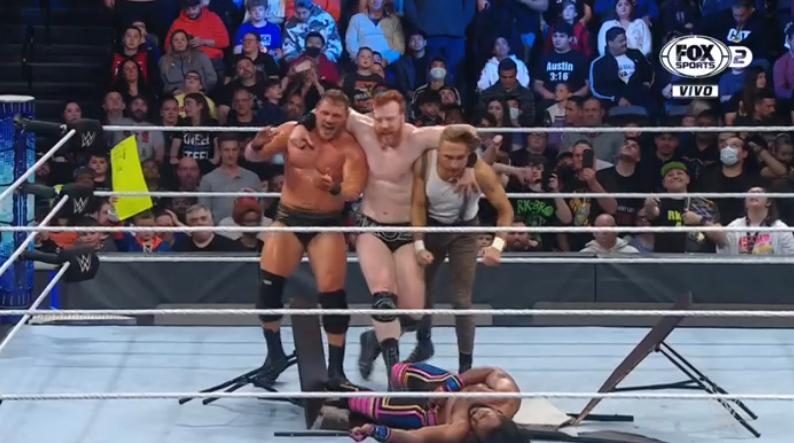 Butch lunged at Xavier Woods, but was stopped by his teammates.

Kayla Braxton asked Heyman for an opinion on McIntyre’s statements and the former told her that the interviewer was flirting with him.

Sami Zayn went so far as to interrupt and tell him about the fact that Shinsuke Nakamura wants to take down Roman Reigns and volunteered to enforce him on his behalf, on the condition that he let the Tribal Chief know. Heyman accepted the proposal, but only to get rid of him. 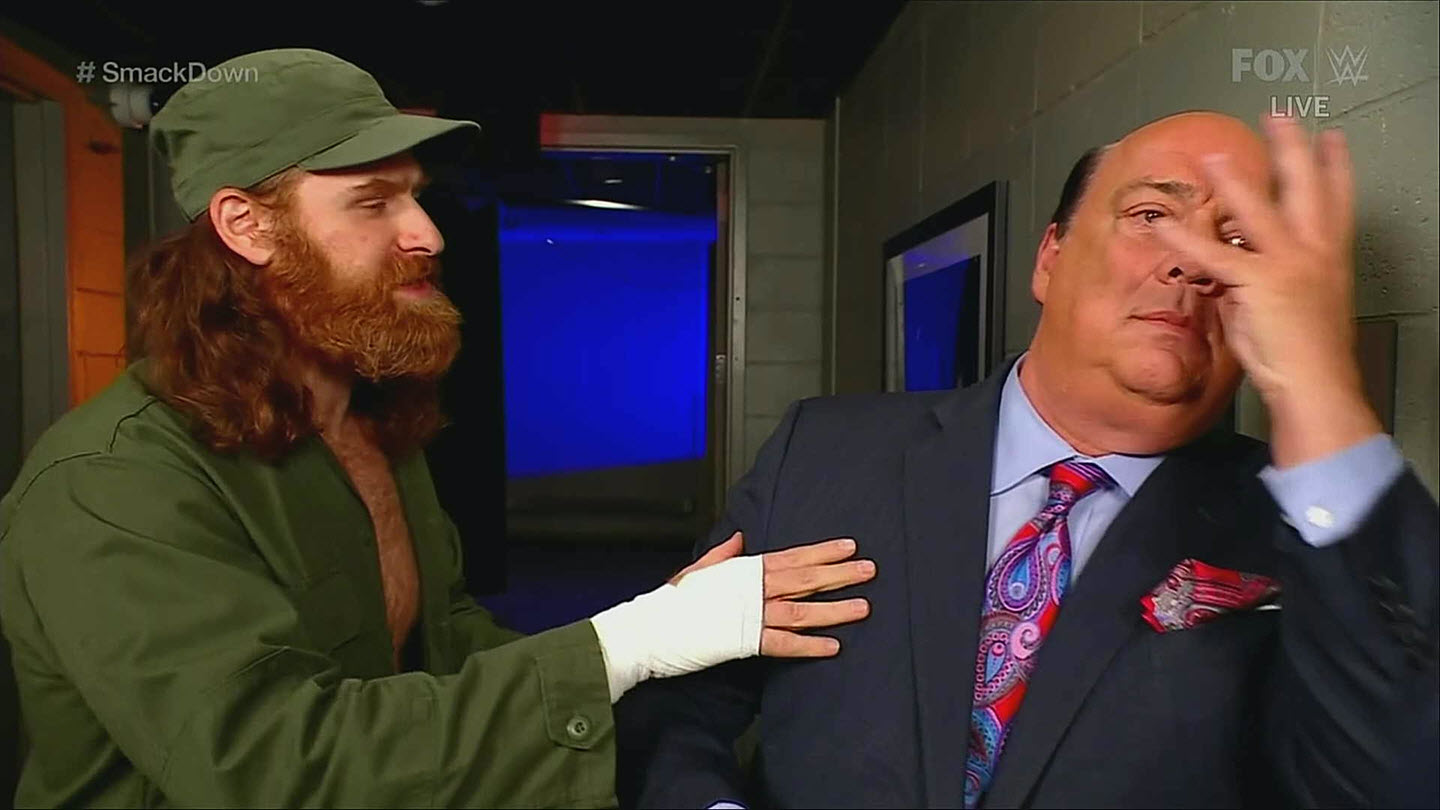 Sami Zayn asked Adam Pearce for a match against Shinsuke Nakamura and the official told him that they can fight now.

And we had a new part of Lacey Evans’ life story and she made it clear that she will go for the SmackDown Women’s Championship.

Precisely, Lacey Evans reappeared in the ring for the first time in more than a year, premiering new entrance music, although she only greeted the public. 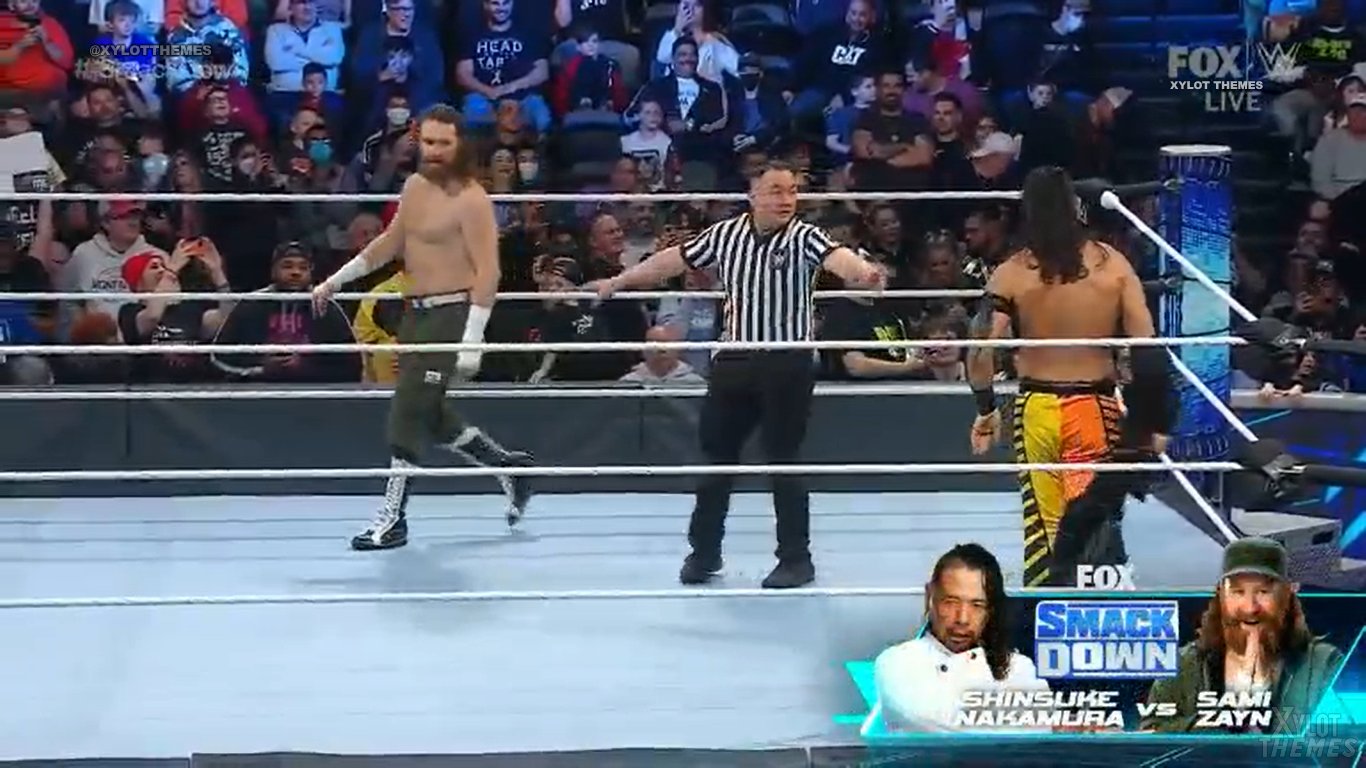 Sami Zayn wanted to prove that he can be worthy of Roman Reigns and was looking to finish off Nakamura and criticized McAfee for dancing to Nakamura’s music. Both were partners at the time and knew each other quite well, however, the Japanese was the one who took the initiative and almost finished him off with a kinsasha, but Sami countered with a Michinoku Driver for a count of two. After the commercial break, Sami was the one in control of the match, but Nakamura managed to recover and carried Sami out of the ring, continuing the attacks near the announce table, although the referee was counting.

Before the count of ten, Sami returned to the ring and took the victory 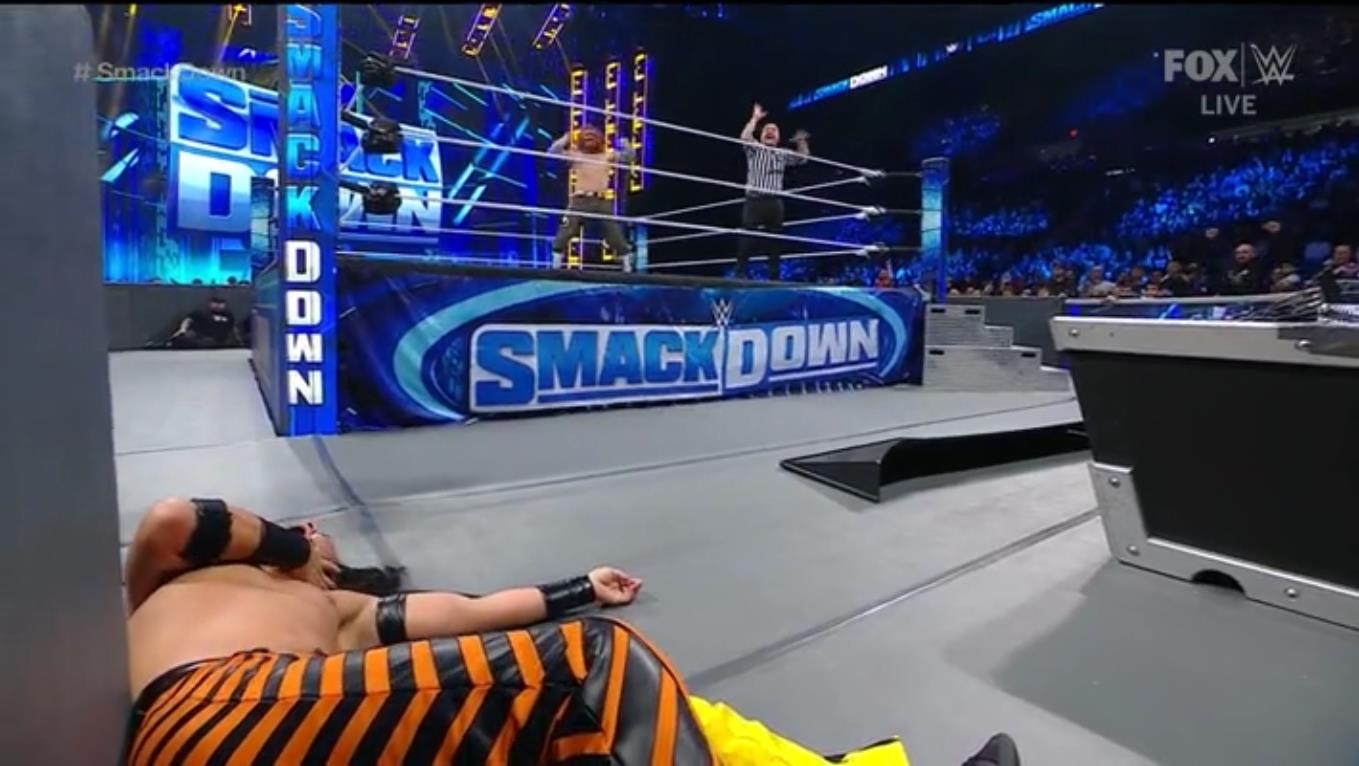 Hey seriously, what’s up with this SmackDown. Except for Gunther’s squash, 3 fights all good and that gave them their time #SDCL #SmackDown

RK-Bro and Drew McIntyre came to the ring, and they began to taunt Reigns by acknowledging themselves, with Orton and McIntyre taking out past feuds, while taunting Roman Reigns and The Usos.

Precisely, those of The Bloodline appeared and did not want to wait: they went to the ring and launched themselves against who their rivals will be this Sunday.

Reigns and company had McIntyre subdued, but Riddle and Orton came to the save and Uno of the Usos received an RKO and Reigns received a Claymore. With the Tribal Chief on the run, the show went off the air. 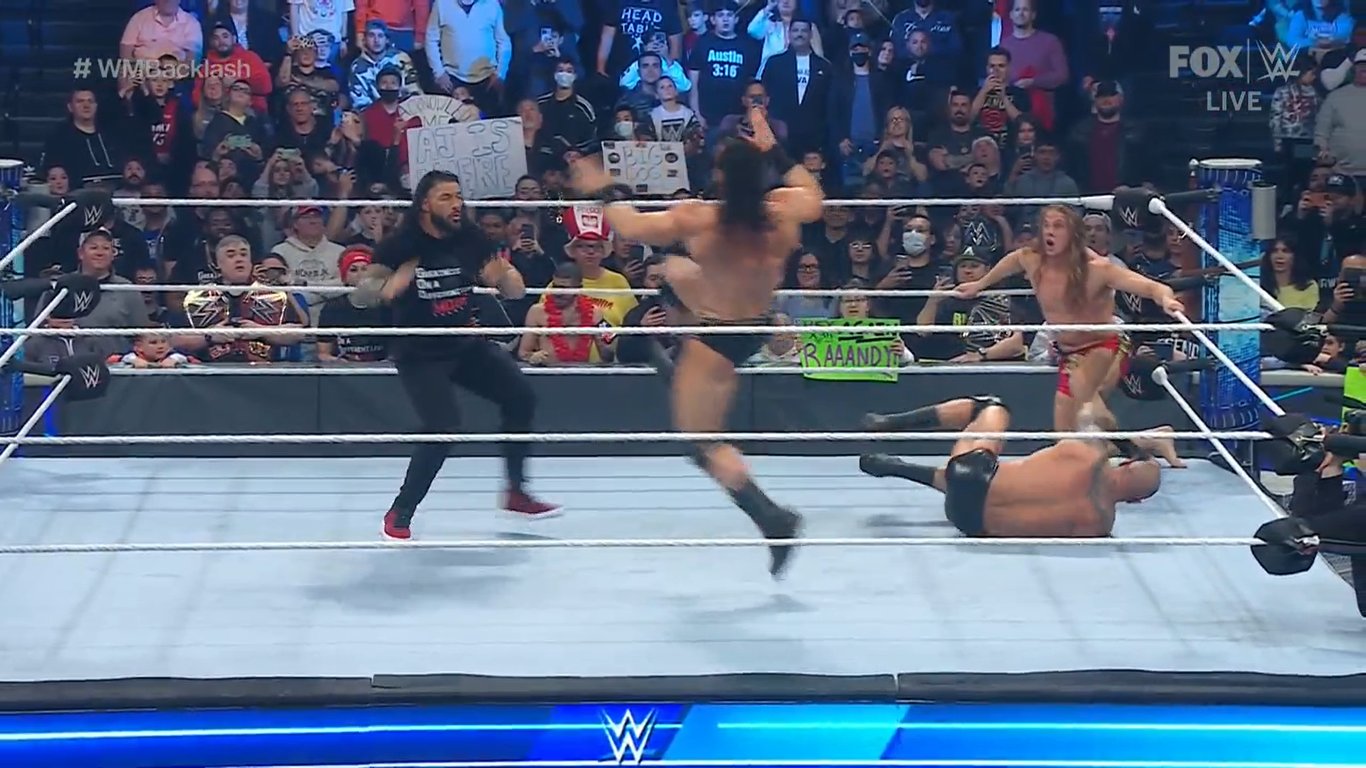 We are waiting for you this Sunday for the coverage of the following premium event: WrestleMania Backlash