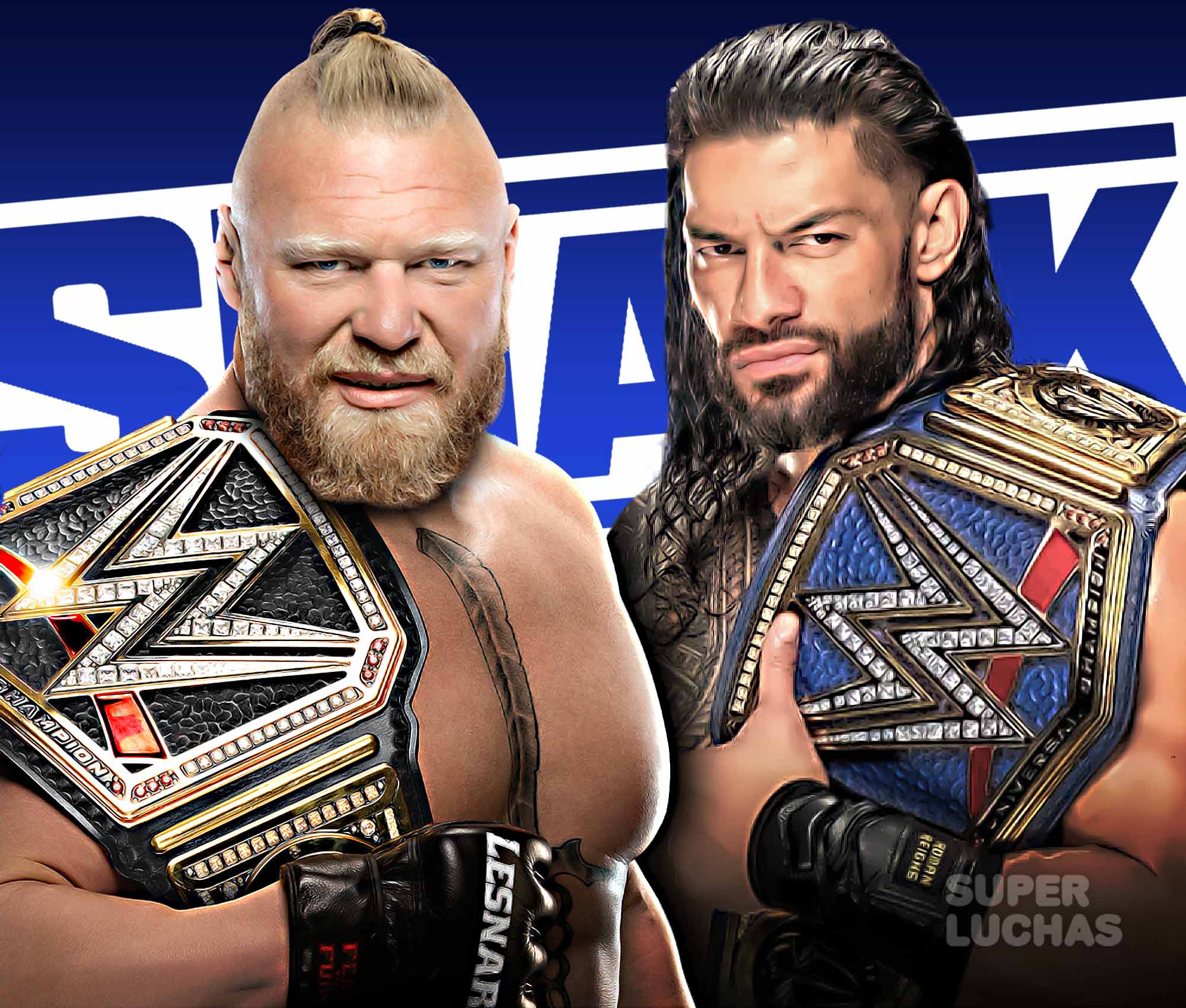 WWE SMACKDOWN MARCH 18, 2022.— The Bloodline attacked Brock Lesnar at the WWE event in the Madison Square Garden, so Lesnar sought to get even with Roman Reigns last week in Smackdown. However, he could not find it (he could barely Paul Heyman escape his fury), so he left empty-handed. But this Friday, both the WWE Champion As the Universal Champion are scheduled, and the faces will be seen two weeks after their fight in Wrestlemania. The action of the blue mark of WWE is issued from Spectrum Centeron Charlotte, North Carolina.

Program dedicated to the memory of Scott Hall.

In memory of the late, great Scott Hall. ❤️ pic.twitter.com/KbcenxYzz7

Roman Reigns and the rest of The Bloodline opened the show, and the first thing they did was raise their championships in style, and the trio is booed.

Roman said there’s a lot to be excited about, including that it’s the first time he and Brock will see eye-to-eye since he crushed him at Madison Square Garden. Heyman has a message on his phone and unfortunately he has to convey to all of us that Brock Lesnar will not be here due to the bad weather he encountered during the trip. Heyman apologizes but Roman seems unhappy. There’s a “We want Lesnar” chant that gains a bit of traction, and Roman understands that he wants Brock here too, but he said he must have been afraid of him. 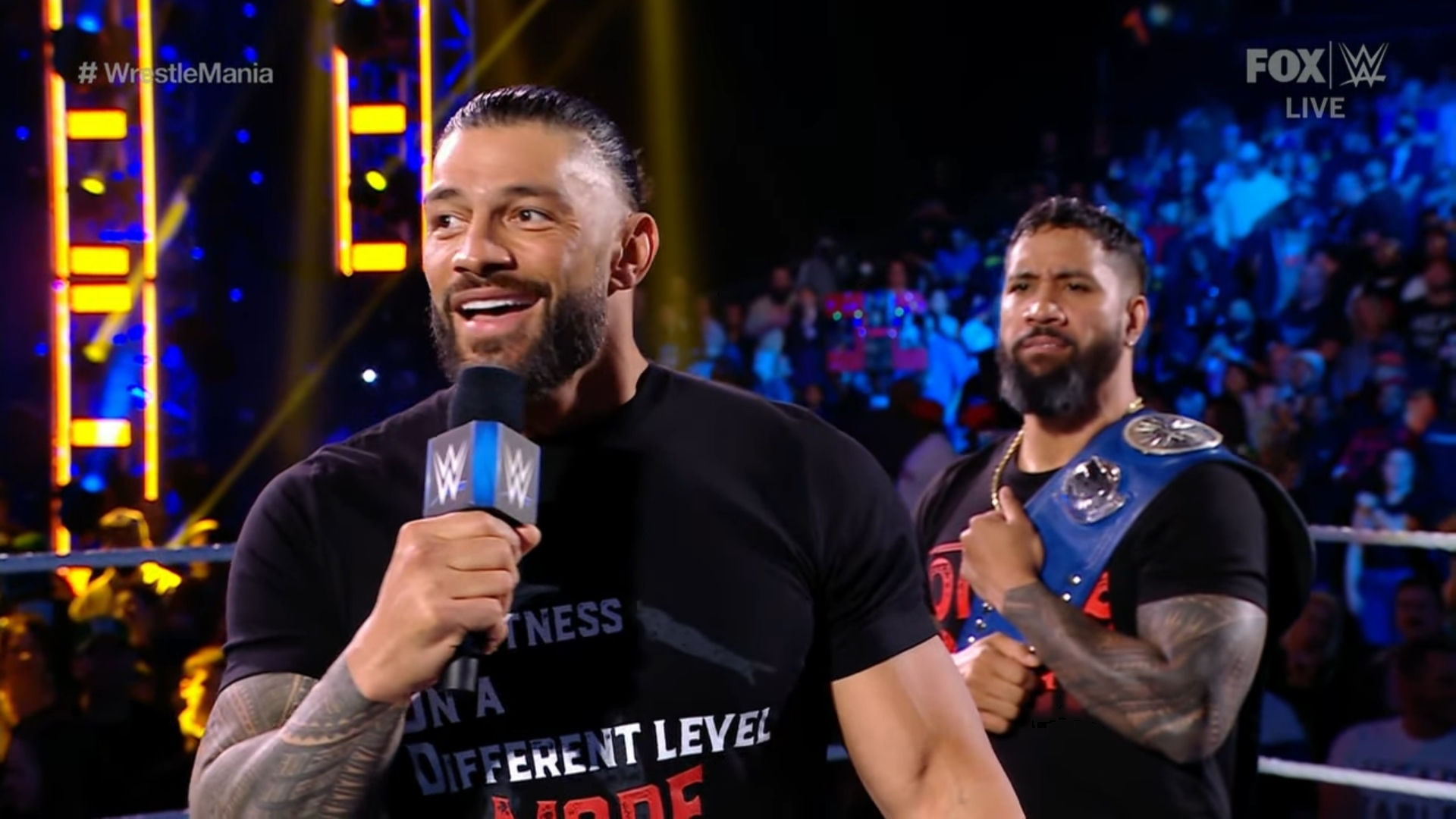 Heyman wants to give him new news but this time Roman doesn’t want to be interrupted. Heyman looks scared and now says Brock’s plane just landed and he’s on his way here. The Bloodline left the scene and reached the parking lot. Brock showed up with a forklift and punched out the windows of Bloodline’s SUV. 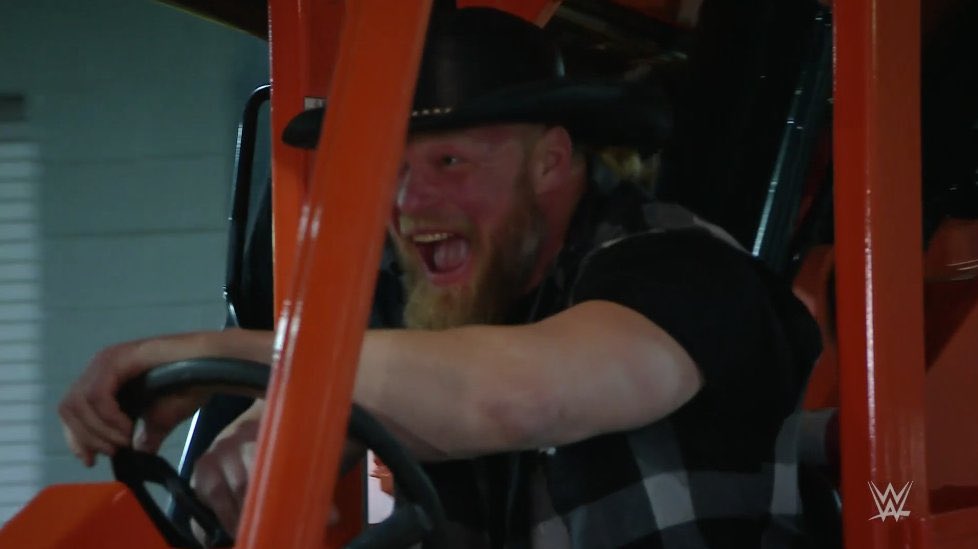 Brock Lesnar came to the ring with the vehicle door. With microphone in hand, he addressed a few words to Roman Reigns telling him that he has brought out his “bipolar beast” and concluded by saying: “I’m going for your blood, so you better be prepared.” 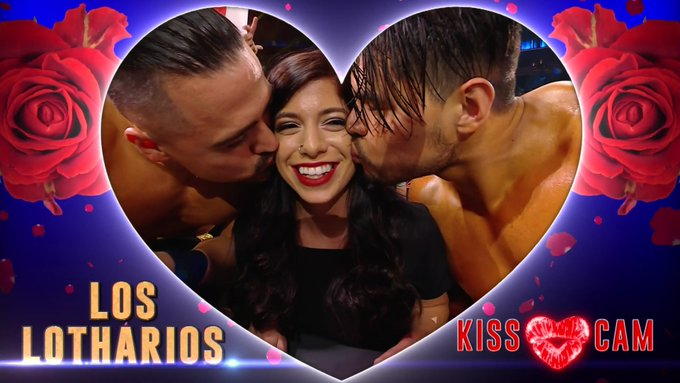 1. Rick Boogs and Shinsuke Nakamura vs. The Lotharians

Nakamura and Boogs continue their preparation for their match against The Usos at WrestleMania 38. However, the Mexicans were the ones who took initial control of the match, and kept Nakamura isolated for a few minutes. Boogs entered to bring some order and managed to combine with Nakamura to knock out Humberto. 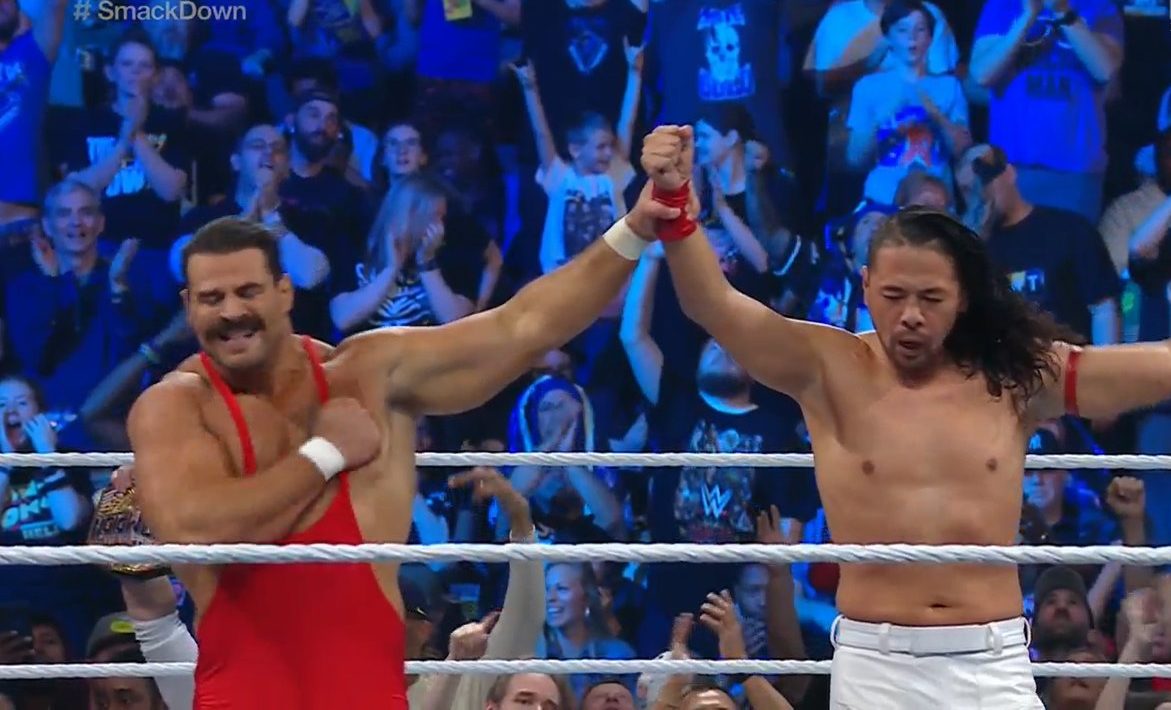 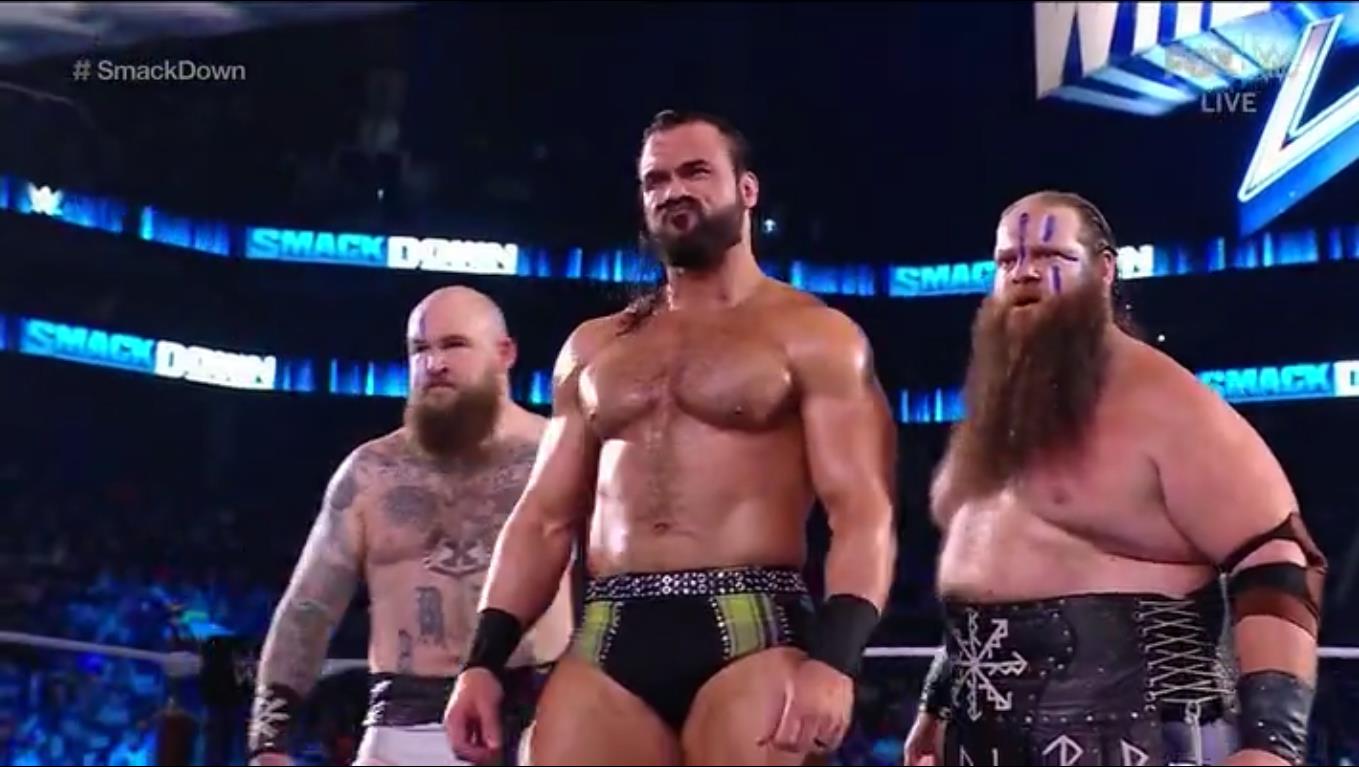 Before the match, Moss cracked a joke, but not even Corbin laughed and we could be witnessing a split between the two. At the start of the fight, the Viking Raiders were the ones who dominated, but Corbin treacherously attacked McIntyre and he went in pursuit of him. After the commercial, the rude ones dominated until Drew returned to action and knocked Mahal out of action.

Claymore for Shanky and it’s over. 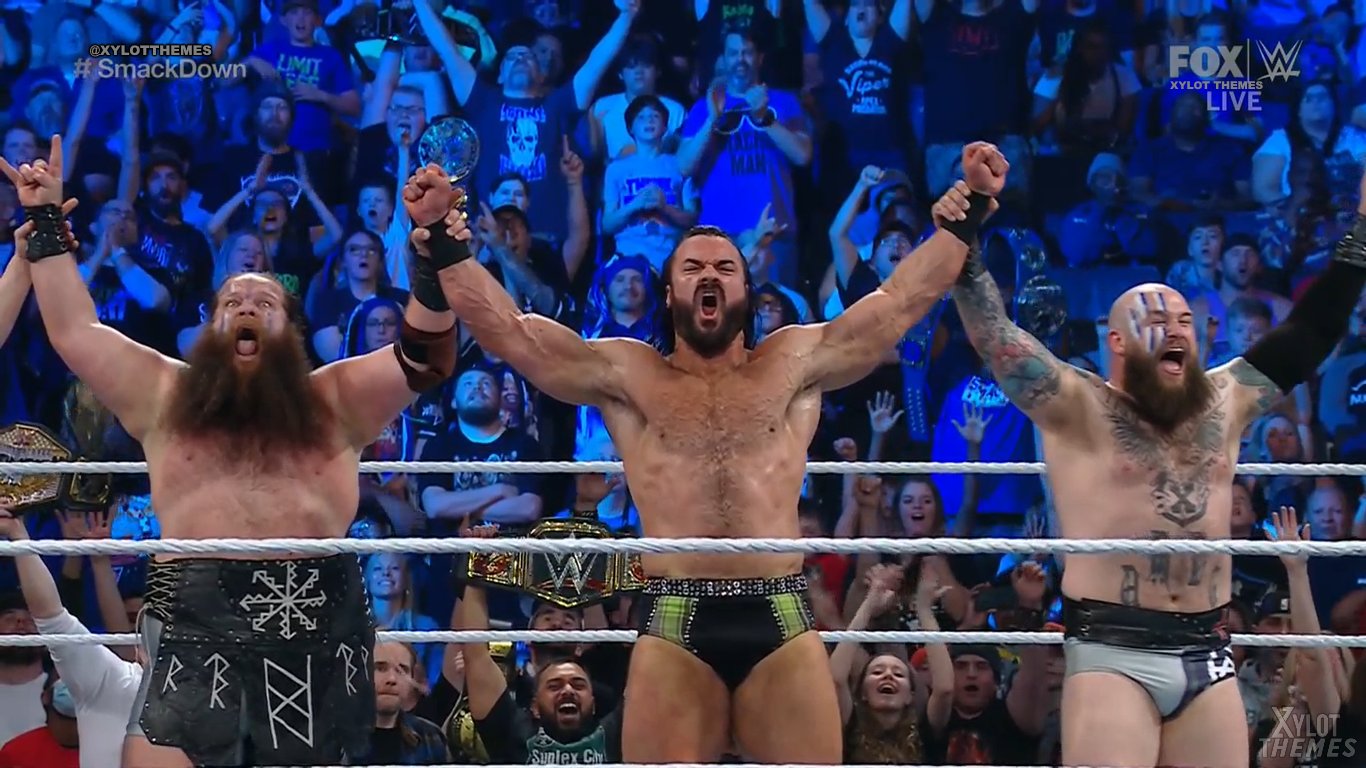 Behind the scenes, Sami Zayn blamed Johnny Knoxville for costing him his Intercontinental Championship and wants his WrestleMania match to be an “anything goes” 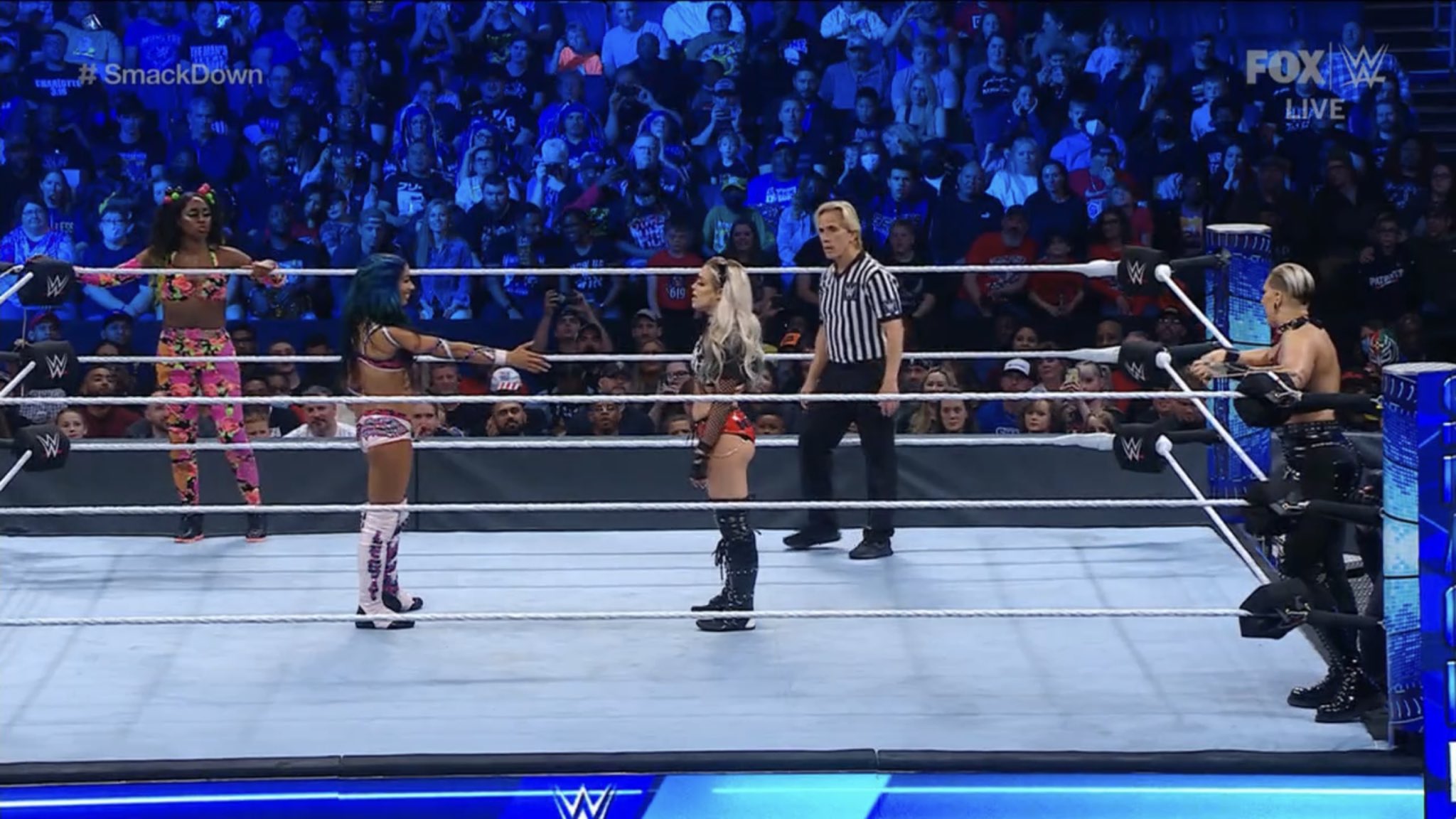 3. Sasha Banks and Naomi vs. Rhea Ripley and Liv Morgan

The Champions Carmella and Zelina were at the commentary table to witness this fight between the two teams that aspire to the title they hold. Liv Morgan started out leading the charge for her team against a tough duo that quickly traded tagging for her, until she was outmatched by her rivals. Rhea entered to put order and managed to control Naomi and Sasha before the commercial break. Afterwards, the action became a back and forth until they were all lying

Natalya and Shayna Baszler appeared out of nowhere and attacked everyone. 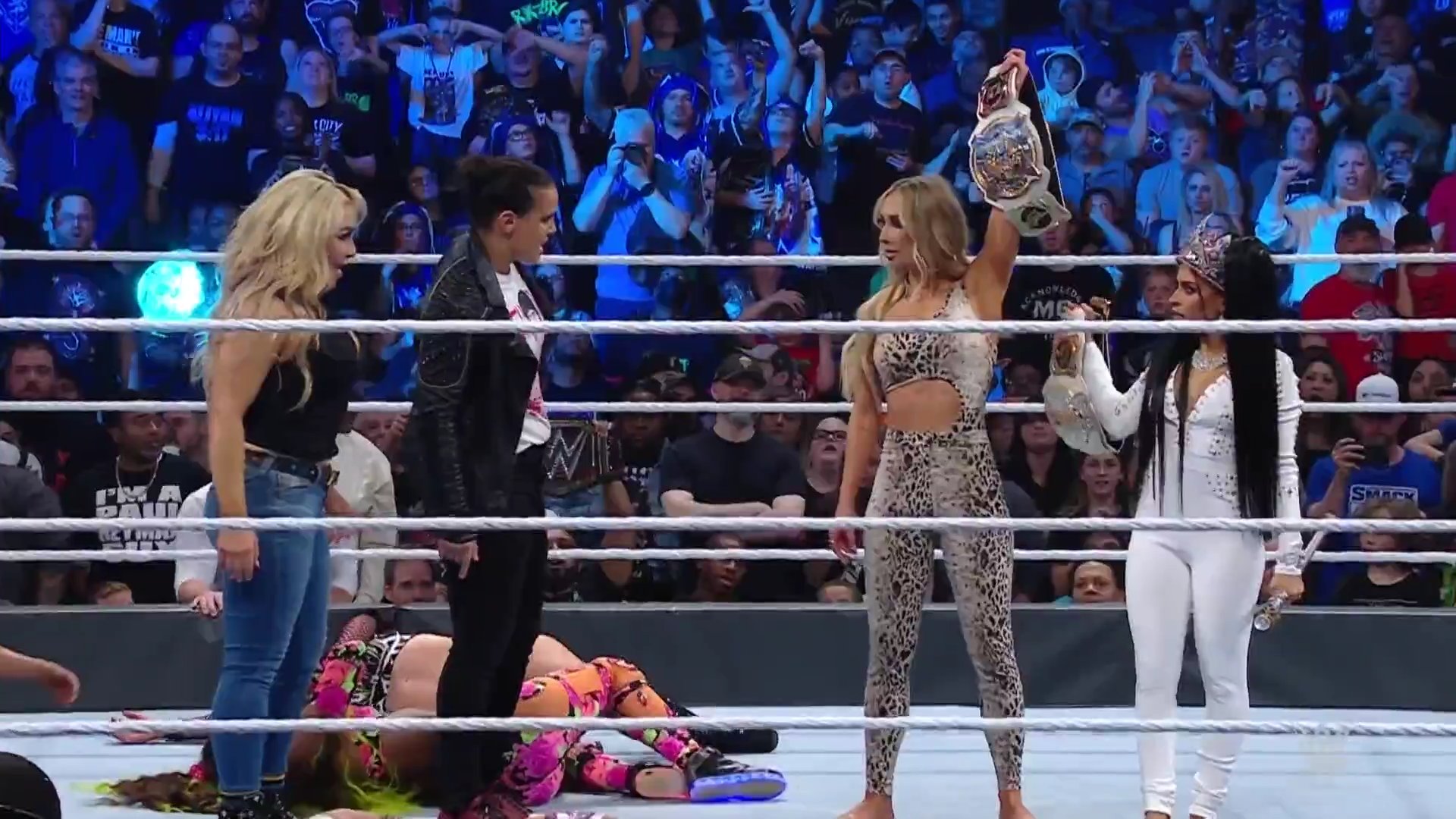 Pat McAfee was called into Vince McMahon’s office and left the announce table.

Behind the scenes, Sonya Deville added Shayna and Natalya to the WWE Women’s Championship match at WrestleMania.

Pat McAfee walked out of Vince Mcmahon’s office and back into the ring. He told how his love for wrestling was born and reviewed a bit until he accepted the job as a commentator on SmackDown.

Austin Theory interrupted asking if McAfee has something for him. McAfee says that it was suggested to him that he apologize to Theory or he would lose his dream of him and his WrestleMania match. McAfee starts apologizing several times and finally says he’s sorry he punched her in the ass last week, he’s sorry Theory’s parents raised an idiot, he’s sorry he made Theory’s filter face relevant, and he’s sorry Theory’s a person. **. Theory smiles, pushes McAfee out. 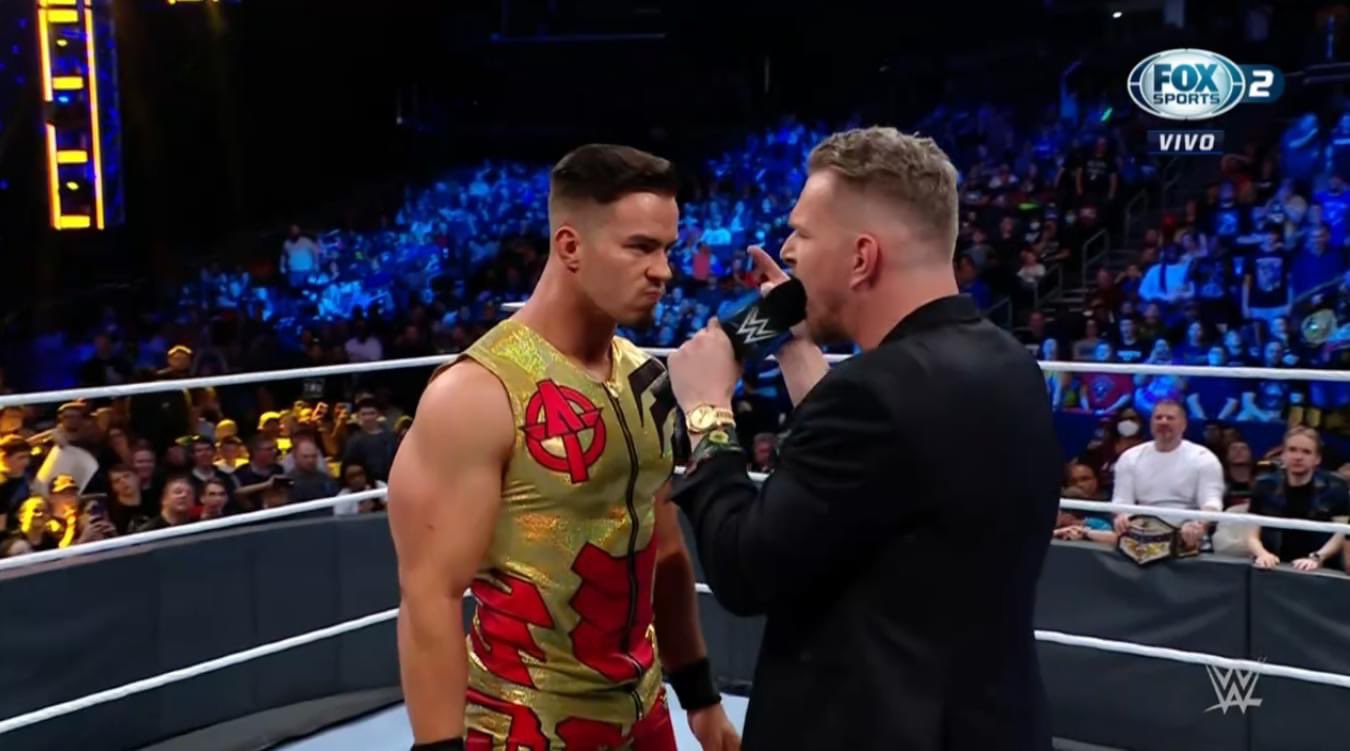 A very peculiar apology @PatMcAfeeShow to @austintheory1 on #SmackDown 😅 pic.twitter.com/Ln2mWrDMci

Following the events of a week ago, which saw Big E with a broken neck, we saw Kofi battle solo against Holland, who was accompanied by Sheamus and Butch. Already in the fight, the one from New Day had to battle against an aggressive Holland, although he was coping with the fight in a good way; however, Butch caused a distraction and Holland took advantage.

After the match, Butch looked like he wanted to continue looking for a fight, but was stopped by Sheamus. The situation did not escalate. 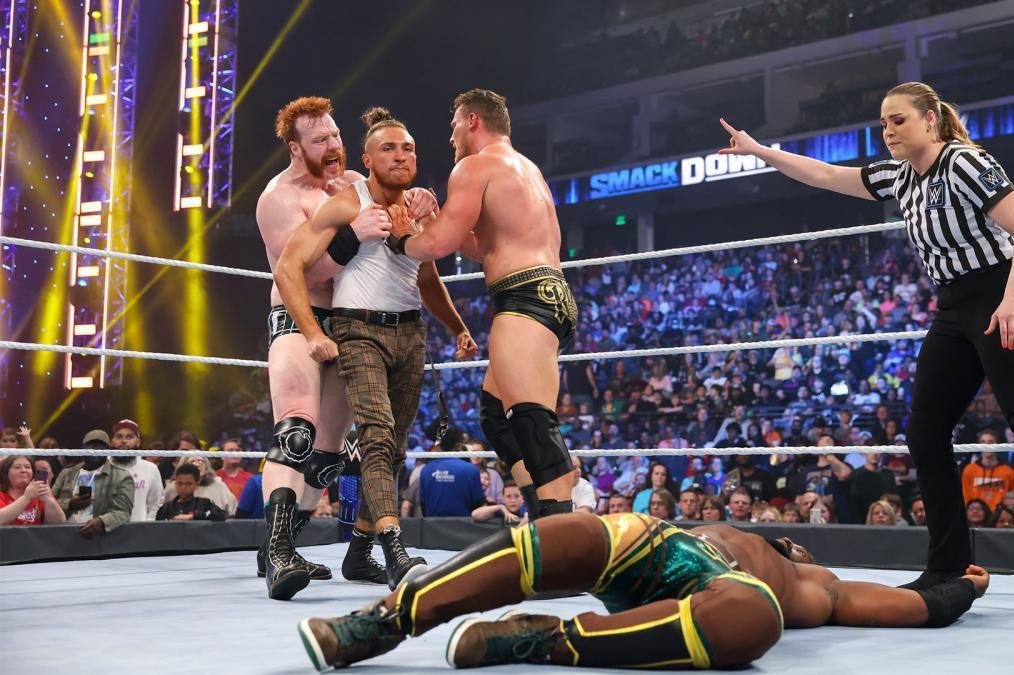 Charlotte Flair came to the ring saying that she always has a plan and last week she showed Ronda Rousey why she is the best in sports-entertainment history. No one has caused Ronda more pain than Charlotte and she added that Ronda was seconds away from making the surrender before they were separated, and that was just a taste of things to come. 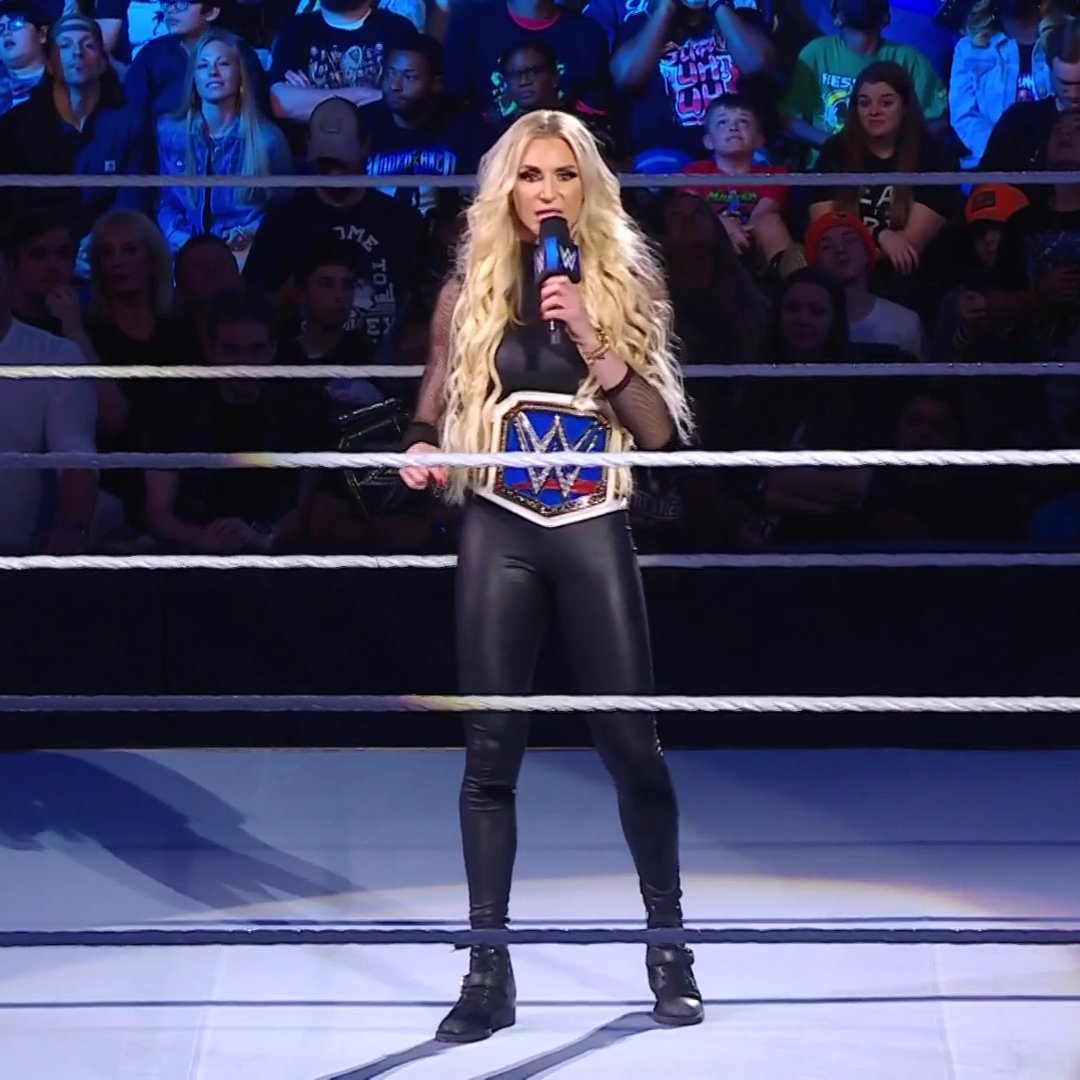 Backstage, Ronda watches TV at a weird angle as Charlotte kept saying that this is the mountain they have to climb to make a legacy here, and when she beats Ronda at WrestleMania, Ronda will be gone again.

Charlotte invited Ronda to the ring and she appeared. The Queen took a kendo stick to threaten Ronda. Ronda doesn’t mind at all, she avoids Charlotte and she starts throwing punches before going for the arm and Charlotte runs out of the ring. Both struggled and Charlotte had the better part, although Ronda did not give up.

After applying a Powerbomb to Ronda on the commentary table, Charlotte was left standing before the program went off the air. 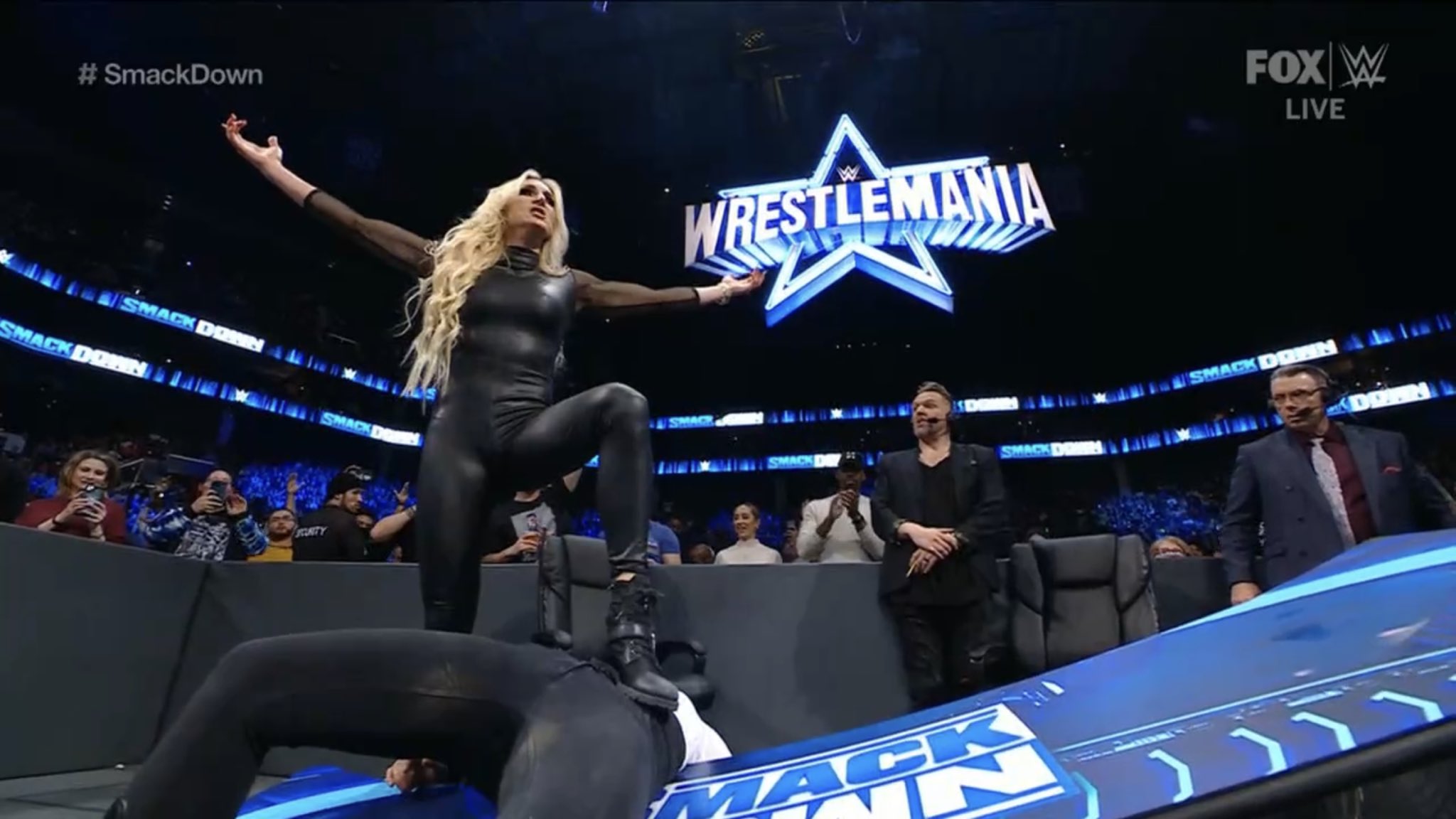