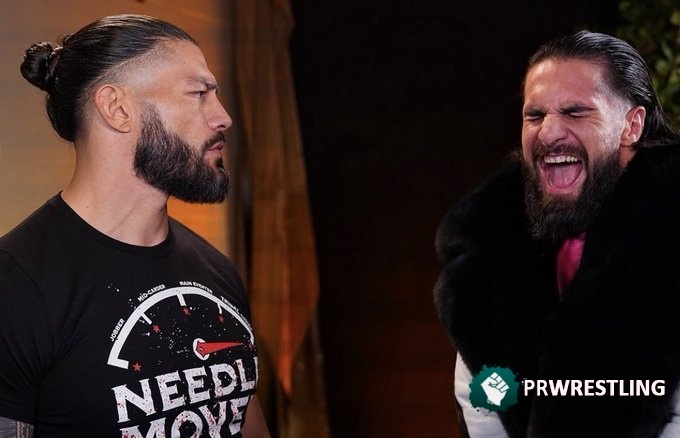 Universal Champion Roman Reigns made his way to the ring alone. Reigns noted that he was isolated and had a lot of people he wanted to see except Brock Lesnar and Paul Heyman. Suddenly, Lesnar’s music played and he headed into the ring with Paul Heyman.

Lesnar said he got what he wanted last Saturday, and now he wants to give the fans what they want. Lesnar then challenged Reigns to a champion versus champion match. Reigns admitted that it was a good idea, but it is not his idea.

Reigns pointed out that SmackDown is his show and he makes the decisions. Reigns turned down Lesnar and said he doesn’t do business with people who associate with trash. Heyman’s feelings were hurt. He was distraught and emotionally said that he helped Reigns win that title and that he loved him.

Lesnar then asked Heyman what he just said. Heyman was scared but said all he had was Reigns when Lesnar was gone.

Heyman tried to explain, but Reigns suddenly hit Lesnar with the Superman Punch and left.

In the back, Sami Zayn told Knoxville to go away and that he didn’t deserve a place at the Royal Rumble.

After the match, Zayn was furious and yelled at Boogs and Nakamura. Suddenly Johnny Knoxville ran out and threw Zayn over the top rope.

SmackDown Women’s Champion Charlotte Flair made her way to the ring. She noted that the Royal Rumble is coming up soon, with the winner receiving a title shot at any title to headline WrestleMania.

They then announced the participants in the Women’s Rumble. Flair pointed out that there is one more major star at the Rumble this year. He then introduced himself as this year’s participant. He promised to win and pick his WrestleMania opponent.

Naomi’s music interrupted and she challenged Flair to a match. Flair didn’t know what Naomi had done to earn a title shot. Naomi then slapped Flair across the face leading to:

Charlottle Flair defeated Naomi. Naomi nearly won the match by count when Charlotte left. Deville announced that the match could not end with a tally. Naomi started yelling at Deville, allowing Flair to attack her from behind.

Deville later announced that the bout is also not a disqualification. Flair then wins with the Natural Selectiona.

Suddenly, The Viking Raiders interrupted and headed for the ring:

In the back, Adam Pearce walked into Roman Reigns’ locker room. Pearce informed Reigns that he chose his next opponent. Reigns didn’t care and told Pearce to leave because he was about to see his cousins ​​win.

Street Fight: The Usos held off The New Day with the D1 on a table.

Roman Reigsn is in his locker room watching the end of the fight. At the moment there is a knock on his door, and Seth Rollins enters laughing and looking at Roman, implying that he is his new opponent, thus ending the show.