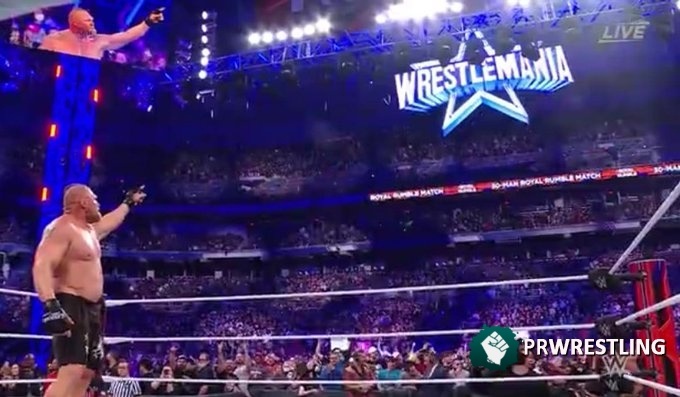 WWE held the Royal Rumble on Saturday night before 44,000 fans in attendance.

The DQ happens when Reigns refused to drop a guillotine despite Rollins having his hand on the ropes.

Reigns then attacked Rollins with a chair, leaving him battered.

Sasha Banks entered at 1, Melina entered at 2 but was quickly removed.

Kelly Kelly, Michelle McCool were among the first to enter. Sonya Deville entered at 11. She kept her jacket on the comment table.

Later Deville eliminated Naomi. Ivory came in to insult everyone with a microphone but was eliminated by Ripley.

Mickie James came in and got to eliminate a person. Alicia Fox, The Bellas and Summer Rae were part of the back of the fight.

Sarah Logan entered and ran into her friend Liv, but Logan and Morgan were eliminated by Brie and Nikki. Lita came in and eliminated James.

Molly Holly as Mighty Molly entered at 27. Nikki ASH took her down as she entered and eliminated her.

THE ROWDY ONE IS BACK.@RondaRousey is in the #RoyalRumble Match!!! pic.twitter.com/qUEHGwMlhn

Shotzi entered at 29. Rousey eliminated Brie. Shayna Baszler walked in at 30 and Rousey was glad to see her.

Charlotte and Rousey were the two finalists and the crowd was very excited. Rousey countered a great start and quickly eliminated Charlotte to win the Rumble match.

Becky Lynch defeated Doudrop to retain the Raw Women’s Championship after the Man Handle Slam from the second rope.

Good fight where there were many Slams, Spears, F5 and Hurt Lock but nothing was enough. Lesnar pushed Lashley into the corner, but squashed the referee in the process.

Roman Reigns appeared and speared Lesnar with Spear. Reigns looked at Heyman, who handed him the WWE title belt. Reigns hit Lesnar with the belt and Lashley crawled over Lesnar for a count of three to win the title.

MVP handed the title over to Lashley and the two celebrated and Heyman walked off with Reigns.

Johnny Knoxville entered 9. Knoxville took Zayn down and hit him. Styles beat up Knoxville and Ford hit Knoxville the Splash. Holland put Knoxville on the apron to take him out, but Zayn kicked him out instead. Styles eliminated Zayn.

Omos took out several but later they all teamed up to take out Omos and Styles ran into the group and helped take out Omos.
Drew McIntyre entered at 21 on his return. McIntyre easily took out Moss and Corbin and beat them up on the outside.

Kofi Kingston came in at 24. Owens pushed him into the barricade but both of his feet hit the ground. This seems not supposed to be the case, but the deletion was declared.

Bad Bunny entered 27. He hit Sheamus and knocked down Owens. Riddle wanted to be his friend but Bad Bunny gave him a Canadian Destroyer.
Shane McMahon came in at 28. He went right behind Owens and eliminated him.

Randy Orton came in at 29. He gave Big E an RKO before eliminating him with Riddle.

Brock Lesnar came in 30. Lesnar beat up a few before taking out Orton with no problem. Lesnar gave Bad Bunny an F5 before eliminating him. Lesnar also eliminated Riddle and Shane.

Brock Lesnar stayed in the end with McIntyre whom he threw to the outskirts with an F5 in order to win and secure his starting position at WrestleMania.

BUNNY AND THE BEAST.@Brock Lesnar just dropped @San Benito with an #F5 and went on an absolute rampage! #RoyalRumble pic.twitter.com/mH64a0tZ0R