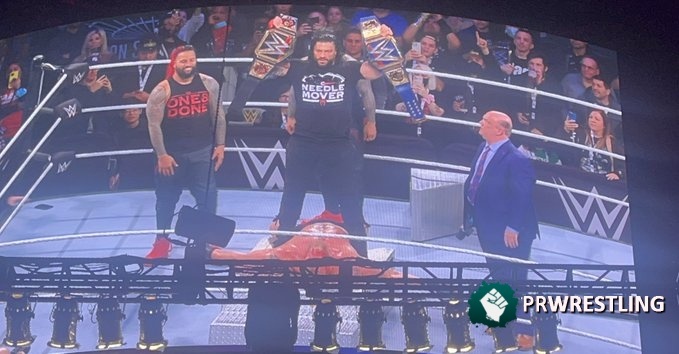 The Uses on New Day

Kevin Owens hit The Miz with a Stunner in a MizTv segment.

Drew McIntyre on Sami Zayn easy after the Claymore.

Brock Lesnar defeated Austin Theory. Theory was the mystery opponent and said earlier that he was here for Brock because of what Brock did to him at Elimination Chamber. He quickly lost to Brock after a series of suplexes and the F5.

After the match, Roman Reigns came down and hit Brock with a Superman Punch, but Brock countered a second Superman Punch attempt with a series of suplexes. The Usos came out but were also hit with suplexes. Paul Heyman tried to hit Brock with a chair, but while he was distracted, Reigns hit him with a series of chair strikes, causing him to bleed. The Usos then brought the steel steps into the ring, leading to Reigns hitting Brock with a Rock Bottom on the steps. Reigns and the Usos celebrated by standing over Brock to end the show.

“BROCK LESNAR… ACKNOWLEDGE ME!”#UniversalChampion @WWERomanReigns shocked the @WWEUniverse on the road to #Wrestlemania at @TheGarden by standing tall over #WWEChampion @Brock Lesnar following a vicious attack at #WWEMSG!@HeymanHustle@WWEUsos pic.twitter.com/139BzXOJps