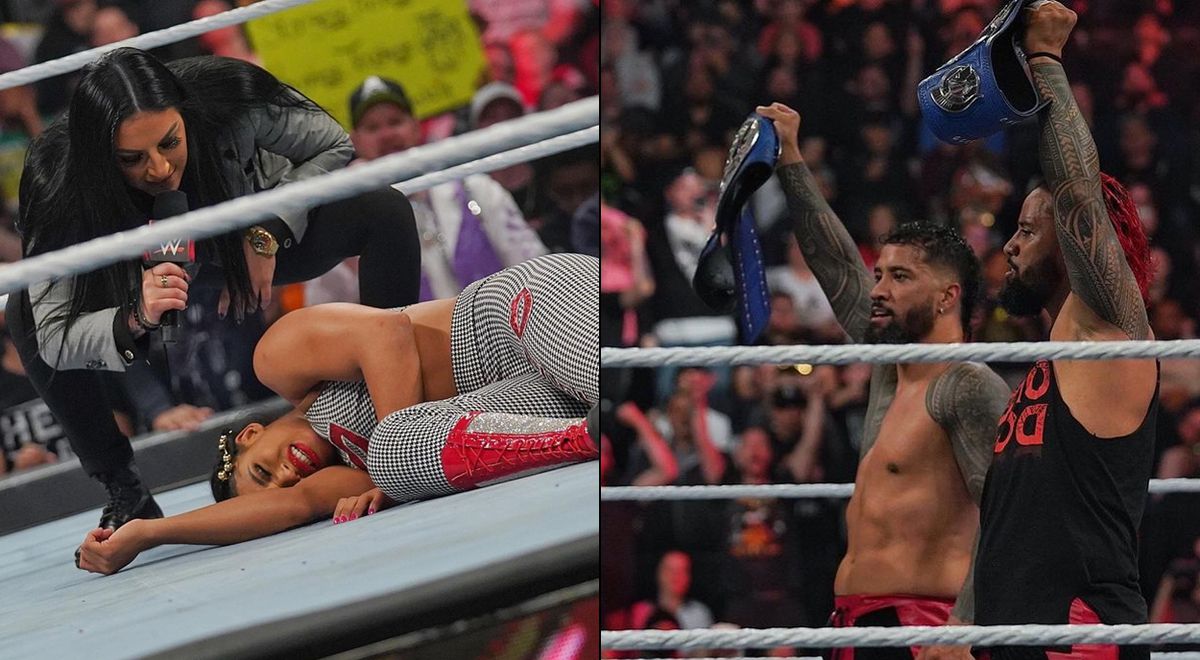 WATCH HERE LIVE WWE Monday Night Raw | The wrestling show before WrestleMania Backlash 2022 today Monday April 11th. The event starts at 7:00 pm (Peruvian time) and will be broadcast by Fox Sports 2. You will also be able to follow minute by minute of this and all of today’s matches on the website of La República Deportes

The Usos return to the ring and knock out Randy Orton with their double kick.

Angelo Dawkins attacks Riddle from behind and then Randy Orton applies his RKO to Montez Ford.

Jey switches with Jimmy without Ford realizing it and they give him his final move.

Dawkins puts Jey to sleep and Ford does his Frog Splash, but before they count to three, Jimmy appears and prevents his defeat.

Dawkins attacks Jimmy outside the ring and then together with Ford they make their final move on Jey, but the count does not reach three.

Ford enters for Dawkins and knocks out Jey and manages to hurt Jimmy.

They almost messed with RK-Bro

The Usos throw Dawkins into the barricade and almost touch Orton and Riddle, but nothing gets to the point.

Jey and Jimmy coordinate and beat up Dawkins, who fails to switch with Ford.

Ford and Dawkins duo and fill Jimmy Uso with blows.

Jey initiates the fight with Ford and the two exchange heavy blows.

Uses are measured with Street Profits.

Riddle manages to send Otis out of the ring and attack Gable and switch with Otis.

Gable’s German suplex on Riddle and then Otis enters to throw himself on him.

Otis does what he wants with Riddle and sends him to sleep with his tremendous movements.

Riddle and Gable start the fight and the Bro throws the first blow.

RK-Bro is measured with The Alpha Academy.

Bianca accepts any challenge from Sonya and signs the contract.

There are several in the queue

Deville appears and gives several names from the women’s division that could face Bianca.

The EST is still up

Bianca KODs Zelina and the fight comes to an end.

Zelina puts a neck brace on Bianca, who suffers, but manages to avoid the fall.

Bianca lunges at Zelina and confuses her with her agility.

Bobby Lashley says a list of things by which he himself rose to the top of WWE.

Bobby Lashhley comes out on the scene and rants against MVP, who betrayed him last week against Omos.

Naomi reverses Liv Morgan’s count with her agility and takes the win.

Naomi avoids Liv Morgan’s ‘finisher’, who then throws herself, but receives a bombshell.

Liv and Naomi kick each other and are badly injured.

Naomi is measured with Liv Morgan.

Cody reverses Figure 4 and applies it to the Miz, but he manages to reach the rope.

Miz applies his Figure4 to Cody Rhodes’ injured leg, but he doesn’t give up.

Cody throws himself between the ropes against El Miz.

Cody turns on after an attack by Miz and sends him against the canvas on his back, but the count only reaches two.

The youngest of the Rhodes is dominated by El Miz, who sends him with a kick to the face outside the ring.

The Miz manages to reverse an attack and kicks Cody.

The Miz manages to reverse an attack and kicks Cody.

Cody’s power counter on Miz and sends him out of the ring.

AJ styles wanted to do his ‘finisher’, but Priest kicks him and sends him out of the ring.

Priest pulls a move out of nowhere and makes AJ Styles hit his face with the canvas, but the count doesn’t reach three.

AJ Styles attacks Priest with a Forearm and then on his neck, but the count reaches two.

Damian Priest sends AJ Styles against the cornerback and he is badly injured.

Styles applies another Phenomenal Forearm on Priest who falls confused on the floor outside the ring.

Mahaan grabs Dominik by his neck and suffocates him.

Dominik is thrown out of the ring and they continue to attack him.

Cody indicates that he is someone else and that he is going for the WWE Major Championship.

In the last episode of the red mark, the day after WrestleMania 38, Cody Rhodes made his intentions clear. He wants everything. However, in this return to WWE, despite being a global superstar, she will have to wait a while and face other opponents. For today she is scheduled for a match with The Miz.

AJ Styles took a beating last week at the hands of Edge and Damian Priest, after his fall in the Showcase of the Immortals precisely before the Last Opportunist. For tonight, the Phenomenal will have the chance to take revenge, because he will face the Archer of Infamy, but he could be prowling and his boss could intervene.

YOU CAN SEE: AJ Styles already thinks of another WWE legend for WrestleMania 39

An unmissable match will be the one between Sasha Banks and Naomi against Liv Morgan and Rhea Ripley. This duel will be official and the WWE women’s tag team titles will be at stake. In the last chapter of SmackDown developed this Friday, Liv appeared and defeated the Boss; therefore, the current champions should not be trusted.

Becky Lynch and Bianca Belair are scheduled to appear this Monday and could hint at a potential rematch for WWE’s upcoming PPV event, Backlash. On the other hand, Roman Reigns has also been announced, but after expressing his wishes that The Usos also unify the tag team championships, he could intercede for this to happen.

YOU CAN SEE: WWE RAW: Cody, Bianca Belair and Roman Reigns in the hangover of WrestleMania 38

What channel is Fox Sports 2?

The place where the WWE Monday Night RAW It is in the Little Caesars Arena, located in the city of Detroit, state of Michigan, United States.

WWE RAW: Sonya goes for the women’s title and The Usos want unification