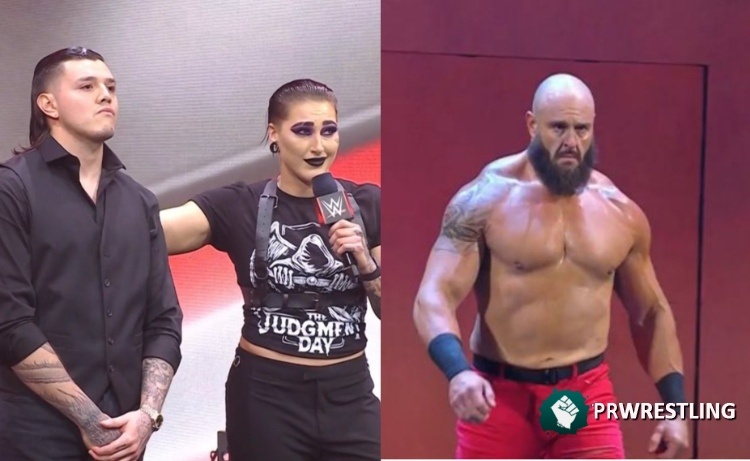 Edge headed to the ring to start Raw.

Edge talked about his relationship with Dominik since he was a child. Edge is not looking at Dominik as Rey’s son. He looks up to him as a WWE Superstar and demanded that Dominik get in the ring.


King came out in his place. He begged Edge not to hurt Dominik. Rhea Ripley came out and said that Rey can’t take care of Dominik anymore and added that she made him a man. Dominik came out dressed all in black.

Ripley and Dominik began to walk towards the ring. Rey said that he couldn’t be a part of this and jumped out of the ring. He walked up to Dominik and told him not to do that. Dominik ignored his father, so Rey walked away.

Dominik and Ripley walked to the ring, distracting Edge. Finn Balor and Damien Priest then attack Edge from behind and knock him down. Rey helped again, but Dominik pushed him away. Ripley threw him onto the steps of the ring.

Back in the ring, Balor and Priest took aim at Edge’s leg. Dominik pulled Balor up a chair and placed it on Edge’s leg. Balor gave the Coupe.

The Miz and Ciampa noticed a car overturned and on fire.

NewDay vs. Alpha Academy vs. The Lothorios vs. Street Profits ended when Braun Strowman came back and attacked everyone. Strowman gave everyone a vicious beating and ends up powerbombing Dawkins into the announce table.

Rey Mysterio challenged either Finn Balor or Damien Priest to a match tonight.

Damage control segment. They announced Raquel Rodríguez and Aliyah vs. IYO SKY and Dakato Kai for next week. Bayley talks about her beating Bianca, which causes her to snap out of it.

Belair said that as long as she has the title, Bayley has no control over anything. Damage Control jumped out of the ring. Bayley said that he didn’t need to prove anything. He pointed out that they should focus on SKY and Kai winning the tag team titles. Bayley said that when he’s ready, he’s going to win the title one way or another.

Sara Schreiber interviewed Johnny Gargano. Theory got in Gargano’s face and called him Johhny Talking. Gargano added that he will make his debut on Raw next week.

Damien Priest defeated Rey Mysterio. In the end Rey was going for the 619, but Dominik jumped onto the apron. Mysterio stopped dead and looked at his son. Ripley caused a distraction, allowing Priest to hit South of Heaven for the win.


Ripley noted that there is only one more person to take care of. He then announced Dominick vs. Edge for next week.

Later that night, Schreiber interviewed Rollins. He rejected Riddle’s challenge because he is moving on to bigger and better things.

Caged fight: Bobby Lashley retained before The Miz (with Tommaso Ciampa). In the end Miz was going to come out but Dxter Lumis appeared from below the ring. Miz returns and Lashley hits Spear and irons him for victory.

Lumis then enters the cage and locks Miz until he goes unconscious, thus ending the show.