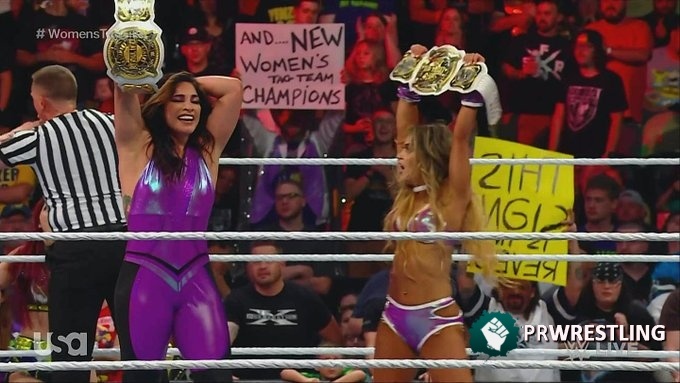 Here’s what happened on Monday night.

Judgment Day walked around the ring after the match. Ripley invited Edge to the ring so he could take what was left of his manhood from him.

Edge walks out and informed Priest that both he and Beth wore the pants in their family. He said that he was 2022 and told Priest that he should stop being a caveman or he would be single for the rest of his life. The crowd laughed when Edge told them that he looked angry and emo, angry that they couldn’t get tickets to My Chemical Romance.

Edge said Judgment Day didn’t learn his lesson because he didn’t come alone. Dominik and Rey Mysterio attacked them from behind with kendo sticks. A brawl broke out leaving Dominik alone in the ring with Ripley.

The crowd encouraged Dominik to attack Ripley. He didn’t hit her, she calmed him down and convinced him to hand over the stick.

Adam Pearce told Miz that Lumis was released from police custody because Miz will not press charges or talk to authorities.
Kurt Angle comes out to a great reaction. He said that he was glad to be home.

Chad Gable and Otis interrupted. Gable said Alpha Academy was looking for a new member, but there wasn’t a shred of talent in Pittsburgh.

Gable offered Angle a membership to Alpha Academy for one night only. Otis gave him an Alpha Academy jacket. Angle threw it and rejected them.

Gable couldn’t believe it. Angle said, “It’s true, it’s damn true,” but Gable pushed him away. Angle told Gable to shut up. They yelled “shoosh” at each other.

Gable was angry and told Otis to go after him.

Street Profits come out, leading to:

Dawkins and Ford then gave Angle a red cup. Angle took a sip but immediately spat it out. Angle grabbed three bottles of milk for them to drink instead.

Interview with Riddle/Seth Rollins at separate locations. Riddle said that he would prove that there was only one man in Rollins’ marriage, “and that’s Becky, bro.”

After the break, Rollins said that Riddle didn’t have a wife because he divorced his dog. Riddle demanded to know where Rollins was and swore.

Bobby Lashley defeated The Miz (w/Ciampa) when Miz got distracted by Dexter Lumis.

The Usos segment and Sami Zayn. Kevin Owens interrupted. Owens informed them that his boss, Roman, still owed him one. More insults lead to:

Interview with Gargano. Theory appeared and asked why Gargano didn’t call him when he won the US title. Theory said that Gargano was jealous and expected more from him. Theory pointed to his MITB briefcase and said that he was alone at the top. He warned Gargano that he was now swimming with the sharks.

Belair, Asuka and Bliss congratulated Rodriguez and Aliyah, who posed with their new belts as fireworks went off.