In addition to informing you and always updating all the WWE resultslike every Monday we bring you closer the best coverage and live results of WWE RAW. We are going to narrate you live and enjoy together the entire red mark event today June 6th.

WE ARE NOW AWAY FROM MEETING THE NEW MEMBER!

As we already mentioned, The Judgment Day would make a new member official tonight to continue sowing terror in the red mark show. Who will it be? Next…

THE MAN OF THE TIME HAS ARRIVED!

Cody Rhodes appears again in a WWE string after his HIAC injury. Rhodes suffered a torn pectoral so he will have to undergo surgery, recovery may vary but the estimate is 5 to 6 months.

The audience screaming at the top of their lungs “Thank You Cody” was noticeable. The American Nightmare pointed out that it was a privilege to do what I do, but what surprised the Universe the most was that Rhodes announced that he had already finished with Rollins. However, Cody was very mysterious when he saw the MITB briefcases.

But this did not end here because the architect came to the string to exclaim the following; “I know I’m the last person you need to hear this from… but Dusty is so proud of his baby right now. I still don’t like you. But after what you put yourself through last night, you’ve earned my respect. You are without a doubt the toughest person I have ever been in the ring with.” With these beautiful words, both shake hands like true champions. Cody left the room very happy, however Seth came from behind to brutally attack him in the area where the injury is present. The American Nigthmare was rejected from the stretcher and left under his own power… 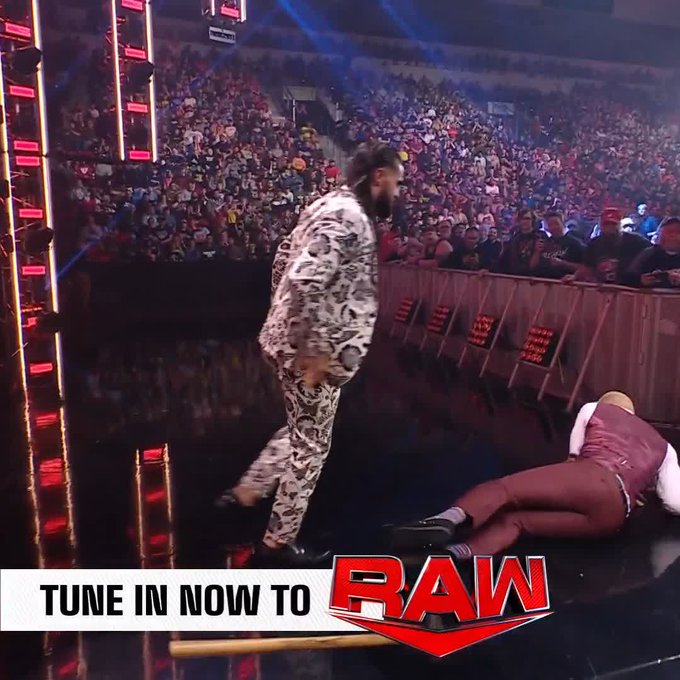 After having dethroned Tozawa, Dana Brooke is in charge of facing “The Man” tonight, this match will decide the fate of the 24/7 Title, will Lynch be able to become champion tonight? Then only by Planet Wrestling … 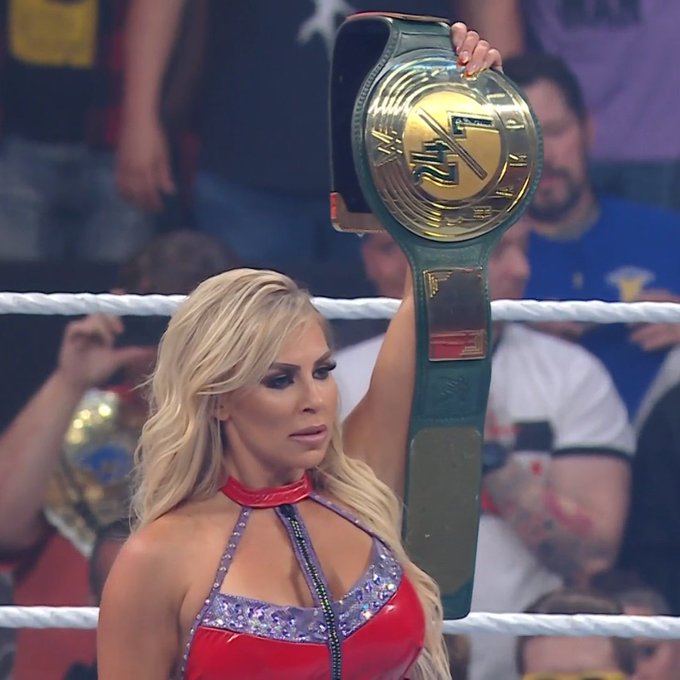 DIDN’T GET IT!, Brooke retains her title in a fight that ended very quickly and this is due to Asuka’s powerful influence on Becky. The Osaka-born was out of the string to provide support to the champion, The Man dominated much of the fight, but Dana reversed a low-caliber maneuver and at the time of the flat backs Asuka took Lynch’s foot preventing him from getting away from account. Causing her defeat in this way. 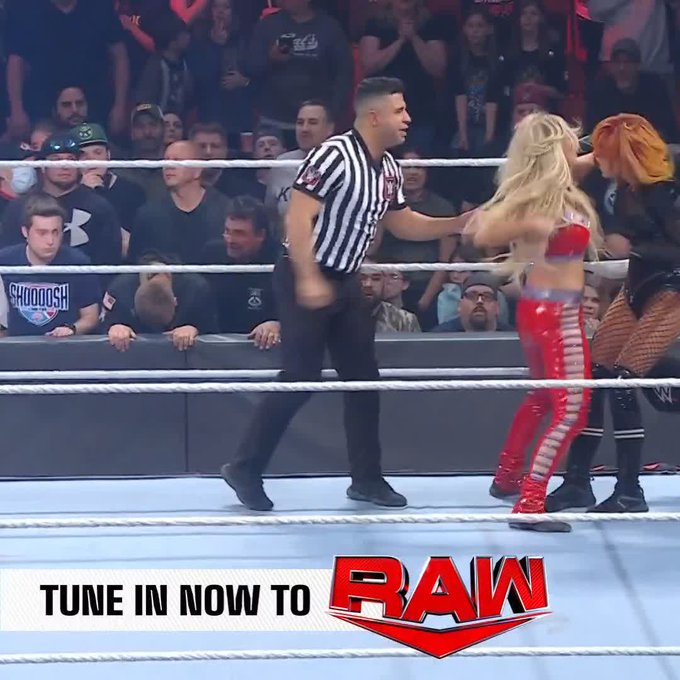 RIDDLE VS THE MIZ

We would have the couple of the moment, Maryse and The Miz would receive Riddle to chat with him a bit, however the talk ended in a not very pleasant way. Riddle began with the importance of greeting The Miz’s wife; “Bonjour. Omelette du fromage. My name is Riddle.” Taking a seat he pointed out that he will go big because Riddle finished issuing a challenge to roman reigns by the WWE Undisputed Universal Championship. After this Ciampa arrived to attack him and none understood what was happening. At the end of everything, a duel between MIZ and RIDDLE is scheduled. 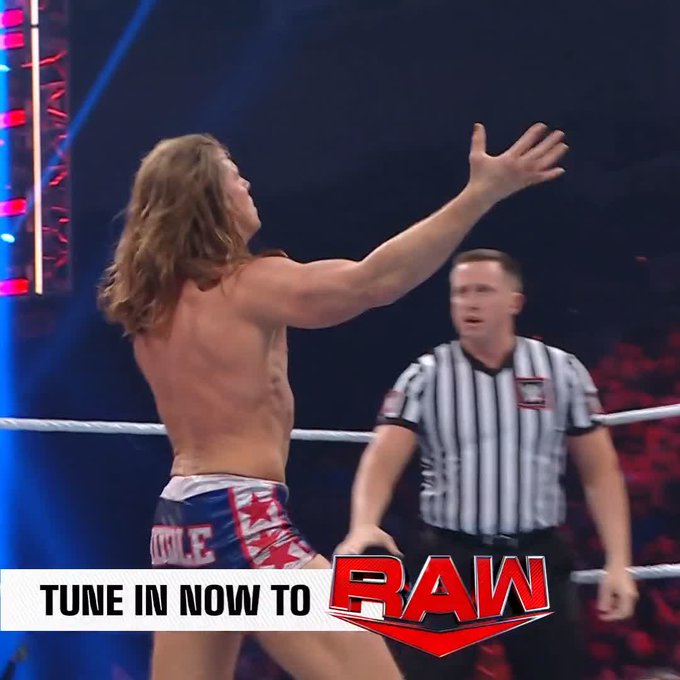 THIS IS FOR YOU RANDY! With a great dedication Matt leaves the string. Riddle won the victory after applying an RKO to the company’s Double Grand Slam, The King Of Bro’s did not let Miz change his outfit to the point that Randy’s partner ended up ripping his pants and leaving him with a defeat more and without his clothes.

THE STREET PROFITS VS THE USES

The Unified Champions will face a dumbbell much loved by the public. The Samoans are not going to let their pride be trampled underfoot, so today they will seek to mount a very aggressive offensive that ends the fight as soon as possible to satisfy the Chief of the Table, despite the level of the Prophets being very careful… 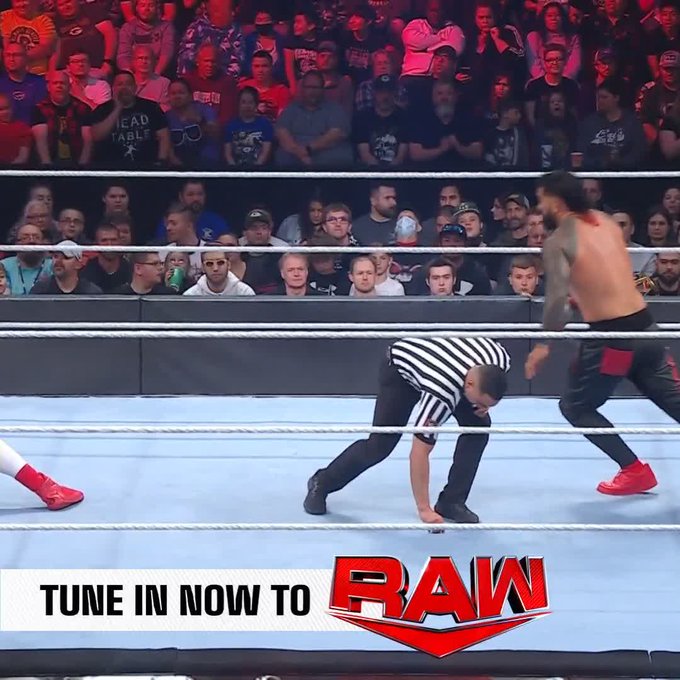 THEY DID IT! The Street Profits have defeated the Unified Champions. This is the first loss for the Samoans since the tag team titles were unified. Montez Ford did not stop attacking for a single moment, his aerial attacks were great sights and very effective, however again the Count Out was present at the red mark.

NOBODY MOCKS THE ALL POWERFUL!

We would have a segment where Bobby Lashley would comment on what happened at HIAC and what was next for his career, however Theory did not consider it relevant and in a very arrogant way he confronted the Almighty. There was an exchange of words but the ones that caught the most attention were the following; “You have defeated Brock Lesnar. you have beaten Drew McIntyre. you have beaten Randy Orton. But you haven’t beaten me!” The champion was going to take the classic selfie of him but Bobby kicked him out of the ring and thus ends their promo for both of them. 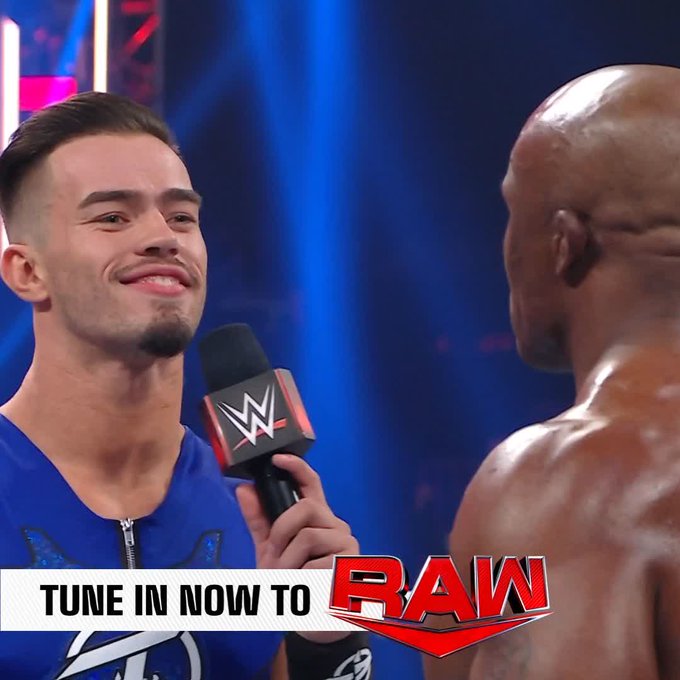 ONE MORE VICTORY THANKS TO REY!

The Lion roars louder than ever, Dominik would go toe-to-toe with Mahaan. Although when it comes to experience it is very difficult for Dominik to stand out since he does not have a career as long as his father’s, however that has never been an impediment for him to provide good fights for his misfortune today he accumulates one more defeat since Rey Mysterio caused his disqualification to prevent Veer from continuing the carnage … 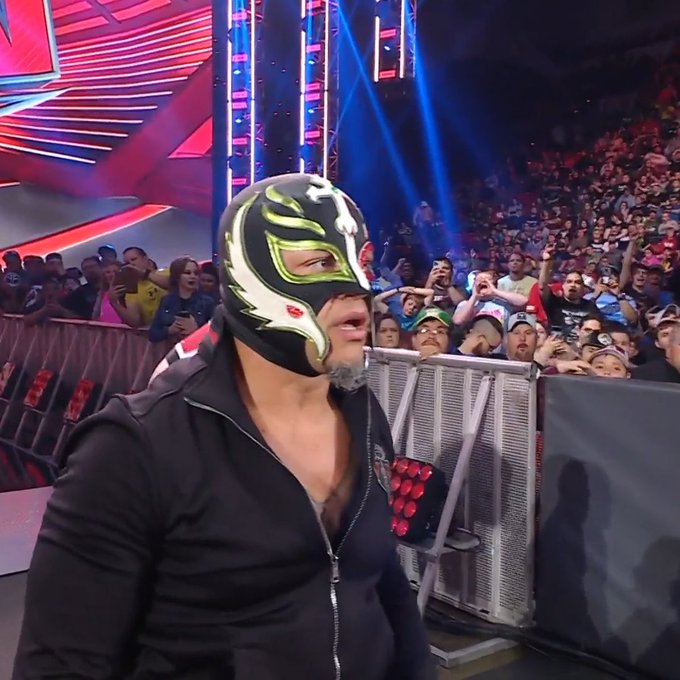 THE NEW MEMBER IS…!

After much waiting Edge, Rhea Ripley & Damian Priest are ready to welcome the new member of Judgment Day, and he is a superstar who has had a great career within WWE his name is… FINN BALOR. The Prince is announced as an official member of Judgment Day and his words were as follows; «Join me #TheJudgmentDay It wasn’t a choice, it was a calling. Finally… I can see clearly.” After welcoming him, the time came that no one expected. Priest would attack Edge to make his official betrayal. In a few moments the category «R» superstar was on the canvas and the worst thing was being attacked by his former teammates …

IT WAS A GOOD TRY…

The Nigerian Giant showed his strength again, after being victimized by the Almighty in HIAC, he came with a lot of past anger. With his finisher Omos quickly won the match there was a clear difference in power and the Giant made it very clear. After the MVP match he was with a couple who previously conquered the titles in pairs. The Dirty Dawgs returned to RAW but Ziggler got tired of all the talk from Omos’ manager and sent him to the ground with a Superkick. 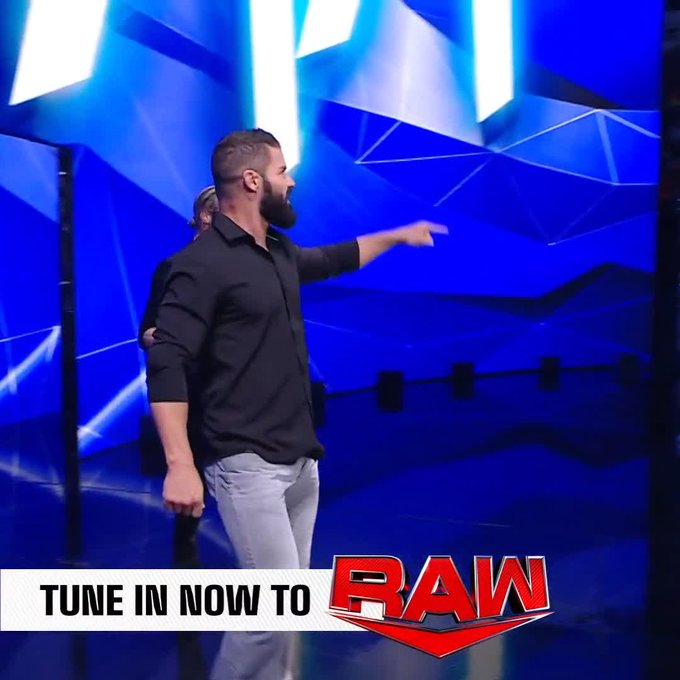 ARE YOU REALLY EZEKIEL?

Alpha Academy would be present again in their territories and this time they would have the opportunity to face Elias’s brother. Otis began to mount the offensive, both exchanging blows in the center of the string, however Zeke’s strategy prevailed until the last second of the duel. At the end of the battle he finally admitted it… KO was in front of him and said it; “I lied to you if I’m Elias” so that he would later say that he was a lie and that he wanted a rematch against Kevin the following week. 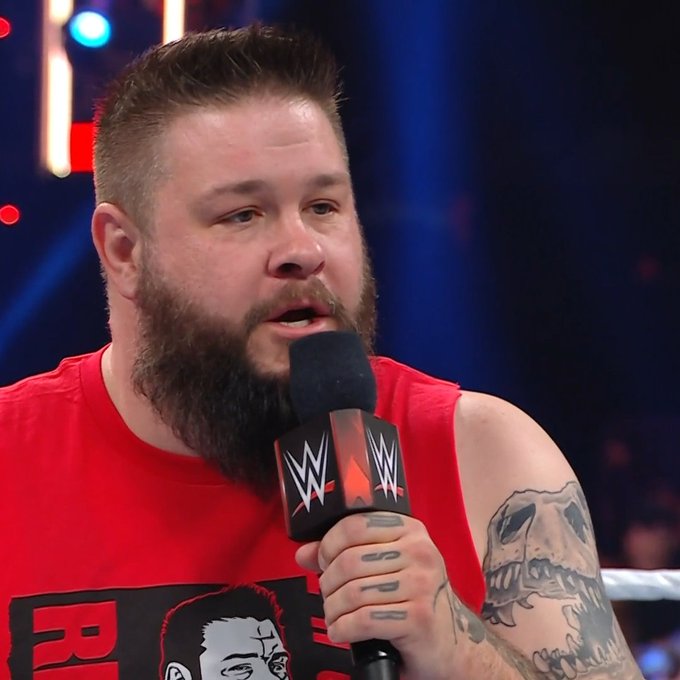 Right now, these four warriors will coalesce in a great contest to define who will be the challenger of the MITB champion, we have just witnessed a betrayal in which Ripley was the protagonist. On the other hand, Bliss has maintained her winning streak since her arrival while Liv has been on the star plane for a while, the one that is just beginning to take action is Double D who has been away for a while but her overwhelming strength does not disappear …

IT’S ALL! Rhea Ripley will be in charge of facing Bianca Belair at MITB. The Living Nightmare will have the opportunity to face one of the great current references of the women’s division in WWE. The combat provided great maneuvers and brute force moves. Doudrop and Ripley were the ones who had the most dominance in the ring, however Rhea is the chosen one tonight and with this smile she celebrates it. 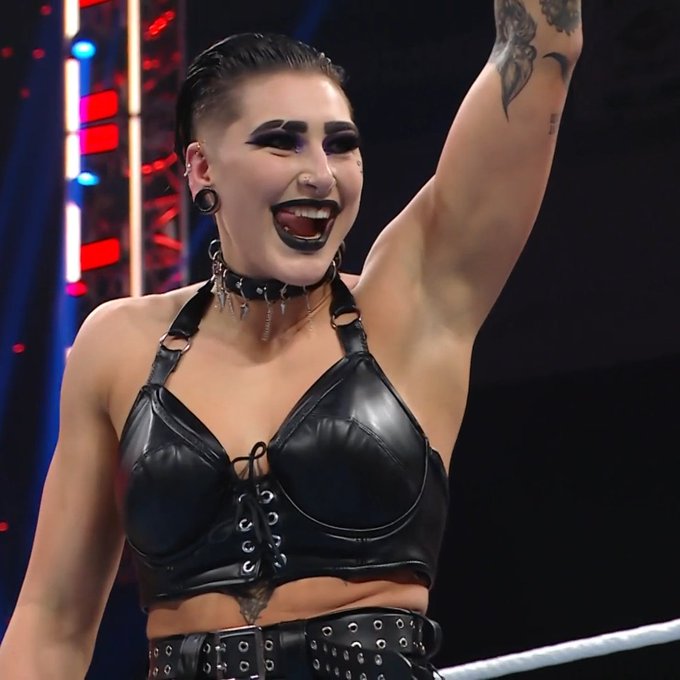