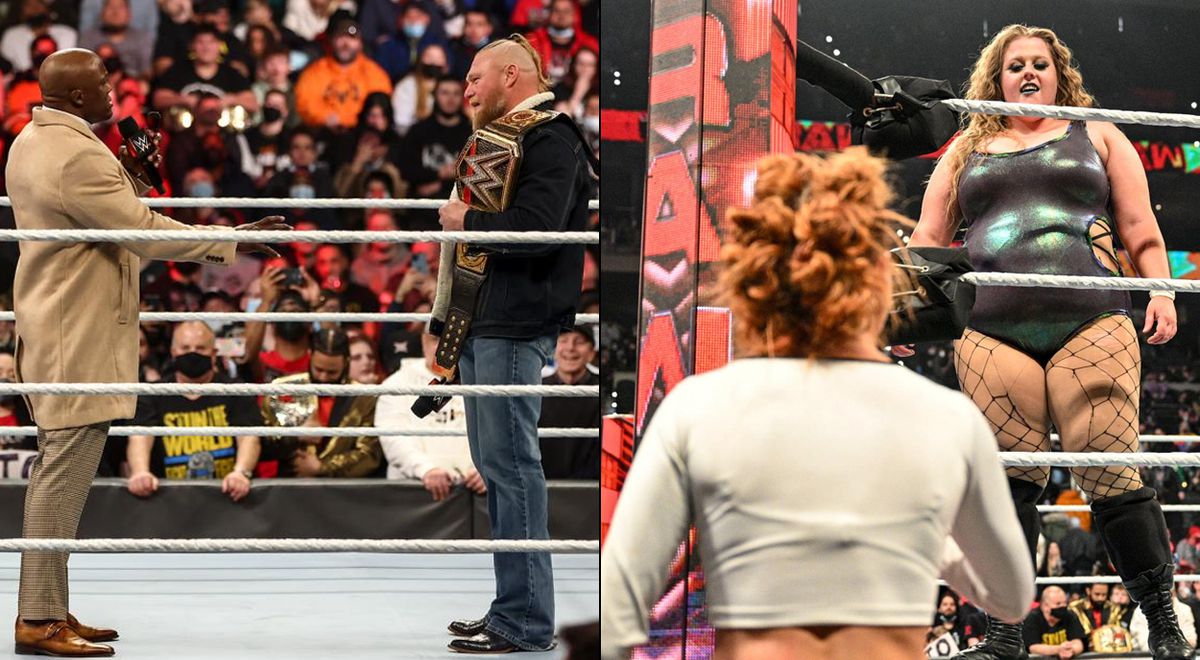 WWE carried out this Monday, January 10, a great chapter of Monday Night Raw, which had great combats, stories and surprises. With a view to Royal Rumble 2022, the first confrontation between Brock Lesnar Y Bobby lashley, who will fight for the world championship of the company.

In the same way, the stellar day was hotter than said encounter between two colossi. Liv Morgan, Bianca Belair and Doudrop put up an amazing match, which resulted in the latter as the winner. In this way, it will be measured with Becky lynch in the Battle Royal event, for the women’s red brand title.

The hit of the night occurred in the division in pairs. RK-Bro lost to Gable and Otis; so that, The Alpha Academy became the new Raw Tag Team Champions. Also, Edge and Beth Phoenix had a racy crossword with The Miz and Maryse.

There is a fight for Royal Rumble

Doudrop senton on Morgan and the count now if it reaches three.

Doudrop knocks Morgan out and covers her, but Belair does a 450 ° turn on both of them and avoids cover.

Morgan locks Belair, who doesn’t give up and stands up, but receives a double knee from Liv.

Belair is thrown from the third rope by Morgan and then Doudrop sends it against the cornerback.

Morgan had managed to hurt Doudrop, but in the corner she reacts and sends Liv to the ground.

Morgan attacks Doudrop, but Doudrop manages to reverse the movement and throws it facing Belair, but the count is up to two.

Duel to be the challenger

Grayson Waller appears and attacks AJ Stykes from behind and the fight ends.

AJ Styles receives a brutal neck break from Theory, but reacts and connects him with a phenomenal forearm

AJ Styles and Theory share some moves at the start of the fight.

Rhea Ripley and Nikki ASH come on stage and have an interdict in the ring, for not being able to regain their titles as a couple, but in the end they come together again.

Big E revives, but Rollins does not allow himself to attack and still receives a bombshell, but the count does not reach three.

Rollins and Big share their best moves, but neither gives up.

Big E makes a butt against Rollins and they fall out of the ring.

Rollins reacts and sends Big E to the canvas, followed by a padlock and some machetes.

Big E comes out and gets into the ring to face and challenge Rollins to a match.

They send Apollo outside and Ford lunges at him, but is later attacked by the Crews commander.

Ziggler makes Montez Ford suffer, but he finally manages to reverse and applies a bombshell to him and then switch to Dawkins.

The archer is unleashed

Damian Priest sends Ziggler out of the ring.

Orton was looking for the RKO, but Otis appears to apply a Body Slam and covers him up to three

Orton enters and hurts Gable with his classic moves.

Gable and Riddle start the fight by exchanging some keys with each other.

Official fight for the division in pairs

RK-Bro is measured with Alpha Academy, for the Raw Tag Team Championship.

Monday Night Raw begins with images from the previous episode, when Bobby Lashley won a starting chance against Brock Lesnar.

Brock Lesnar will reappear tonight as the reigning world champion that he is. But nevertheless, you will have to be careful because your fight with Bobby Lashley is just around the corner. It is likely that the Dominator will face him or try to attack him, since for years he has asked to measure himself with ‘The Beast’ in a ring.

Regarding the women’s division, there will be an intense triple threat for a starting shot at the red brand women’s title. Bianca Belair, Doudrop and Liv Morgan will face off, and the winner will face Becky Lynch at the Royal Rumble. The favorite is the former member of The Riott Squad; but if it is left out, it also aims to win the royal battle.

YOU CAN SEE: WWE: Sasha Banks will not be in the women’s Royal Rumble due to injury

Another heart attack duel will star RK-Bro against Alpha Academy. Randy Orton and Riddle will meet Gable and Otis for the RAW tag team championships. Last week, the challengers earned this chance by beating the current title holders. Can they repeat that feat? Hard.

On what channels to watch WWE Monday Night Raw?

The place where the WWE Monday Night RAW It is at the Wells Fargo Center, located in the city of Philadelphia, Pennsylvania, United States.

WWE Raw: Lesnar face to face with Lashley and Doudrop wins a chance against Becky