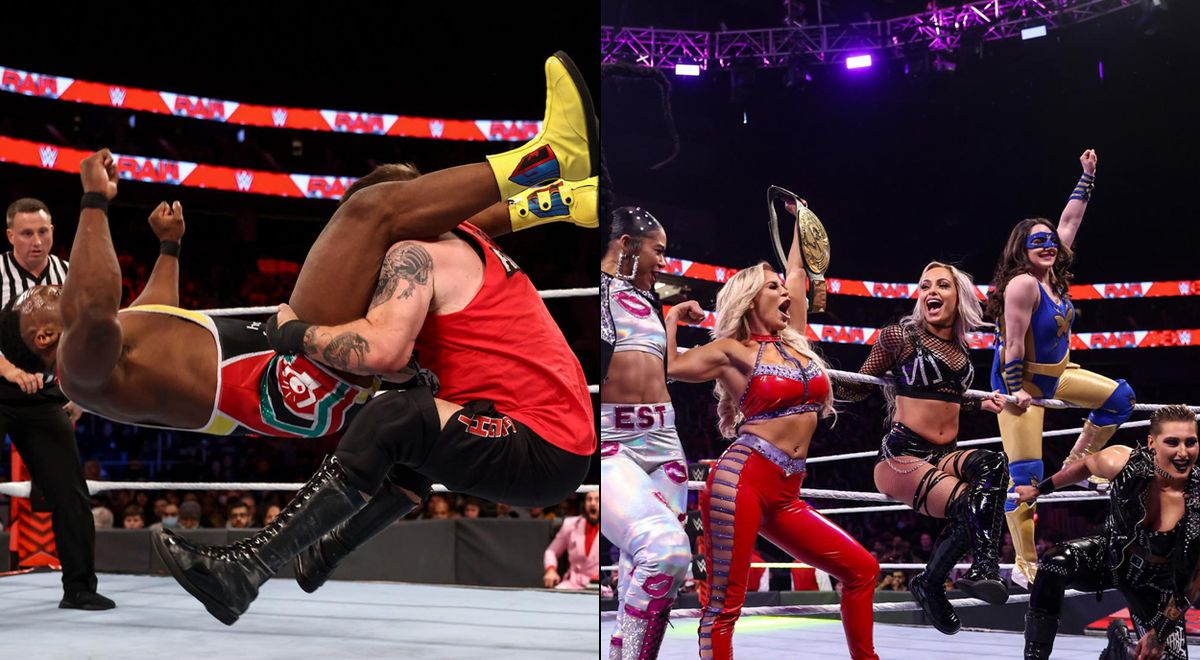 WWE RAW He lived a great night of wrestling this Monday from the UBS Arena in Belmont Park in Elmont with vibrant fights. Little by little the new rivalries are taking shape and the contenders for the respective titles of the brand are establishing themselves as candidates.

Liv morgan He had a tough confrontation with Becky Lynch at the signing of the contract for their respective fight for the women’s championship on Monday Night Raw. The Irish challenged her to a team match and the winner was the American, whose teammates were Bianca Belair, Rhea Ripley, Nikki ASH and Dana Brooke.

Secondly, Kevin Owens did his thing and had a shot at going for the WWE world title. The Canadian faced Big E and was victorious, thanks to the intervention of Seth Rollins; therefore, that fight for the belt became a triple threat.

One of the most anticipated moments of the day was when Edge reappeared in the ring; However, he was interrupted by The Miz, who also returned to WWE and this time, accompanied by his wife Maryse. Both superstars launched every possible insult; So, a new fiefdom is coming.

The red mark ends with the inclusion of Kevin Owens to the WWE world championship dispute.

Rollins goes up to the ring and attacks Kevin Owens and the judge ends the fight.

The world champion does not speculate anything and directly attacks Kevin Owens with all his might.

Fight for a chance at the title

Morgan avoids Tamina’s attacks, sends her to the ropes and applies her ObLIVion to win the fight.

Rey and Dominik apply their double 610 followed by a Frog Splash each and win.

Fight with the flavor of revenge

There is no North American change

Damian Priest makes him a Claw, then his Reckoning and defeats Apollo.

Damian Priest puts his title on the line against Apollo Crews.

AJ Styles complains about Omos for not helping him when Ford attacked him.

Those who “want smoke” won

Montez Ford makes a Frog Splash on Gable and wins the fight.

Miz and Edge continue to argue, but the Canadian challenges him to a duel, but Maryse’s partner says no and they withdraw.

The Miz criticizes Edge for monopolizing all the media and tells him that the only thing he knows how to do is “go back.”

Ziggler applies his ZigZag to Randy Orton, but he manages to raise his arm before the count reaches three.

Randy Orton and Riddle have Ziggler and Roode tied up.

RK-Bro (Randy Orton and Riddle) put their titles on the line against The Dirty Dawgs (Dolph Ziegler and Robert Roode).

Becky brings out all her verbal power

The Irish fighter mocks Liv Morgan from the public and indicates that she has nothing to be the new RAW champion.

Becky Lynch takes the stage to sign the respective contract for her fight with Liv Morgan.

Seth Rollins is the winner

Seth Rollins applies his ‘finisher’ to Finn Bálor and wins.

The light returns for Rollins

The Architect manages to compose himself and returns to competition.

Rollins can barely stand and Finn Bálor completely dominates him.

A half-confused Rollins returns to the ring and starts the fight with Finn Bálor.

Bálor takes Rollins out of the ring and leaves him semi-unconscious.

Seth Rollins is interrupted by Finn Bálor, who without thinking twice attacks him before he begins his duel.

He goes out with the whole architect

Seth Rollins opens RAW with a winning speech in which he lashes out at Big E.

This chapter of Monday night raw It will be special and not because of the incidents that the Survivors Series event brought, but because the mythical Edge. It is not known what his future is or who he will challenge, but that could be the world champion Big E, who fell to Roman Reigns.

How to watch Fox Sports LIVE?

The place where the WWE Monday Night RAW is at the UBS Arena in Belmont Park in the city of Elmont, New York state, United States.

WWE RAW LIVE online: how to watch the wrestling show?

If you want to SEE the internet transmission of the WWE RAW LIVE ONLINE, larepublica.pe will do a minute by minute with all the incidents of the event. Also, you can see the summary at the end of the event.