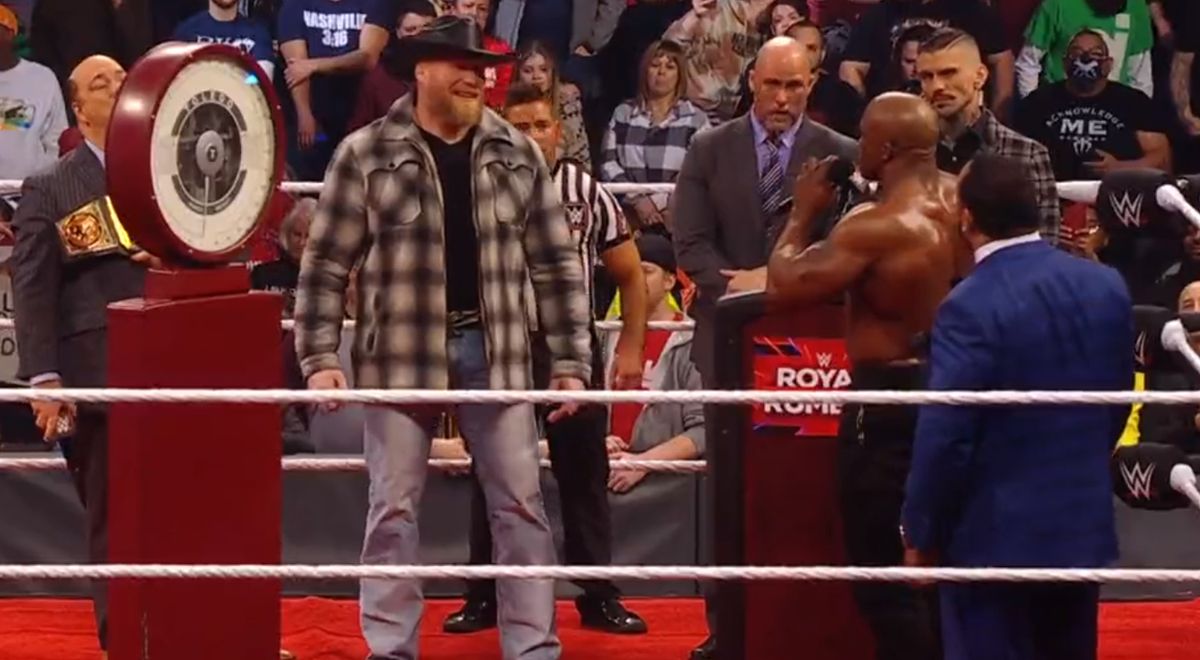 WWE had a spicy episode of Monday Night Raw this Monday from the Huntington Center in Toledo with a view to Royal Rumble 2022. Brock Lesnar and Bobby Lashley starred in an intense weigh-in, in which The Beast again ignored the Dominator.

Becky Lynch and Doudrop bumped into each other backstage, backstage, and didn’t hold back. They came to blows and the VIPs had to separate them. In the end Edge and Beth Phoenix ruined The Miz and Maryse’s birthday celebration for the latter.

Edge and Beth Phoenix appear and make The Miz and Maryse flee after getting rid of the vips.

The Miz goes up to the ring and brings Maryse in to see what he has put together for his birthday.

Ford eludes a 619, but Rey Mysterio manages to cover him from below and wins the duel.

Dominik applies a DDT tornado to Dawkins and Rey Mysterio makes a Hurricanrana, followed by a Senton to Ford.

Rey and Dominik Mysterio fight with the Street Profits.

Becky Lynch and Doudrop meet backstage and end up coming to blows, but are separated by VIPs.

Styles and Theory dodge his finishing moves, but AJ surprises Austin with a Forearm and knocks him out.

Orton surprises Gable with his special move and defeats him.

Orton charges Gable out of the ring and sends him into the announce table.

Tremendous jump backwards from the third rope over Orton, but the count is up to two.

Carmella slaps Rhea Ripley, who stands up and with her special lock makes her surrender.

Liv Morgan shows off her technique and attacks Nikki ASH and Tamina.

Damian Priest loses the fight by disqualification, but remains the United States champion.

Owens punishes Priest in the corner, but Priest goes crazy and hits him in the face until the referee ends the fight.

Owens applies a DDT to Priest followed by a Frog Splash, but the account reaches two.

Bianca Belair knocks out Queen Zelina and takes the victory.

Zelina numbs Belair with a neck lock and almost hits a Code Red.

Bianca brings out her physical power and makes Zelina suffer.

The Beast mocks Bobby Lashley, dismissing him and laughing with Paul Heyman.

Lesnar mocks Lashley, but he responds by stating that he will beat him on Saturday.

Bobby Lashley and Brock Lesnar come out on stage to weigh in, UFC style.

The night of Monday Night Raw begins with images from the previous episode.

The Battle Royal event will take place this Saturday the 29th and will be the first Grand Slam of the year. just a few days, Brock Lesnar and Bobby Lashley will star in a new confrontation on the eve of their confrontation for the world championship. The previous time they met, the Dominator was humiliated by The Beast, so he will want to get revenge.

Becky Lynch will go out to the ring again to rant against her opponents, in this case Doudrop, whom she will face this Saturday for the red brand’s women’s title. Bianca Belair will also appear this Monday; as well as Liv Morgan, who will participate in the women’s Royal Rumble and are some of the favorites.

YOU CAN SEE: WWE Royal Rumble 2022: day, times and channels to see the wrestling event

The Alpha Academy will meet KR-Bro again, but this time they will be measured in a test that will put their minds to the test. Randy Orton and Riddle surprised Gable and Otis last week, and ruined their celebration for the won tag team championship. Tonight his duel for the Battle Royal could be confirmed.

The Miz will celebrate the birthday of his wife, Maryse, who attacked Beth Phoenix from behind after asking her to cancel their battle this weekend. Everything seems to indicate that the famous couple will have to be vigilant because Edge and the Glamazon could interrupt and ruin their celebration.

The place where the WWE Monday Night RAW It is in the Huntington Center, located in the city of Toledo, state of Ohio, United States.