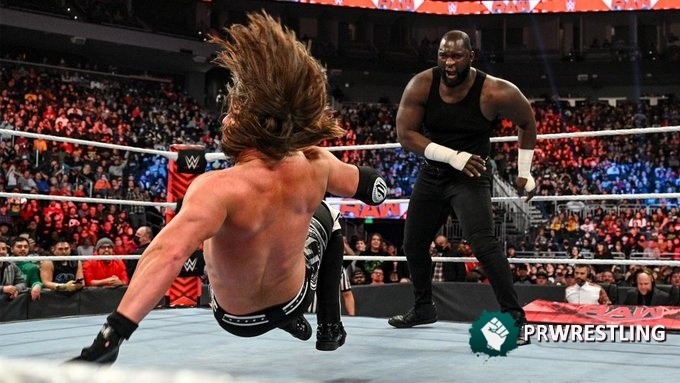 The show began with a segment of Lashley, MVP and Big E which ends with Owens and Rollins attacking.

Miz TV with AJ Styles and Omos
Miz said Styles and Omos have been out of sync lately. Miz said it took Styles 15 years to get to WWE, but WWE begged Omos to sign with them. Miz continued until Styles interrupted him. Styles wanted to hear a response from Omos.

Before Omos could respond, Rey and Dominik Mysterio’s music played, leading to:

After the meeting, Styles called Omos a piece of trash. Omos pushed Styles for Styles to attack him. Styles tried a phenomenal forearm, but Omos blocked it and hit it. Omos told Styles that the next time he saw him would be in a match.

There were pictures from earlier today of Dana Brooke and Reggie in some kind of indoor Christmas park. Truth dressed up as Santa, Akira Tozawa dressed up as an elf, and Tamina failed to capture Brooke’s 24/7 title.

Dolph Ziggler (with Robert Roode) defeated Damian Priest via countdown outside the ring when Priest savagely attacked Roode and the referee called the bell.

Bálor told Patrick that he beat up Theory and that it was time for more important things. Theory attacked Bálor and dropped him on a gear box before taking a selfie.

Theory approached Vince in his office. He apologized for losing, but said he made up for it by attacking Bálor again. Vince responded by saying that he enjoyed firing people just before the holidays.

Vince also gave Theory a rematch against Bálor the next week.

Cutting Edge with Maryse
Maryse talks about her problems with Miz. Edge said he didn’t buy this and neither did the crowd. Miz’s music blared and he tried to attack from behind, but Edge saw it coming. Edge fought Miz, but Maryse attacked Edge from behind. This allowed Miz to give Edge a Skull Crushing Finale.

Rollins and Owens continued to attack Lashley after the match. Owens held Lashley’s head on the steel step and Rollins stomped him against the steel to end the show.