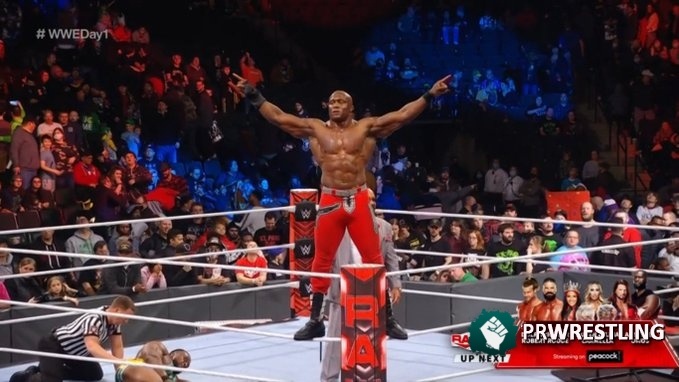 Raw begins with Bobby Lashley and MVP in the ring. MVP said Lashley was disrespected and should be added to the title fight on Day 1.

Pearce and Deville interrupted. They announced that Lashley will be added to the title match at Daty 1 if he can beat Big E, Rollins and Owens in separate singles bouts tonight.

After the match, Orton tried to give Otis an RKO but Otis pushed him towards Gable, who ate an RKO instead. Otis attacked Orton with a back elbow before heading off with Gable.

Becky Lynch said last Monday was a great night for Liv Morgan because they had a great match, but Lynch was still here as champion, just as she said she would be. However, if Morgan had won, fans would find some reason not to like her.

Morgan interrupted. She said fans were tired of hearing Lynch’s record. Morgan jumped into the ring and tackled Lynch before pulling her out of the ring. Lynch pushed Morgan against the post before stomping on his arm, which was caught on the steel steps.
Lynch thought it was unfortunate that Morgan was suddenly injured because he accepted the challenge from Day 1.

Sarah Schreiber asked AJ Styles about his friction with Omos. Styles said it was disrespectful for Omos to leave him, but that he wasn’t ready to resign from his team.

Dana Brooke and Reggie walked through the snowy park. They were attacked by R-Truth and Akira Tozawa, and Tamina but escaped.
Robert Roode & Dolph Ziggler defeated Damian Priest & Finn Bálor after being distracted by Austin Theory. Theory then took a selfie about Bálor.

Apollo Crews and Commander Azeez were having a meeting with Vince McMahon until Austin Theory broke in to brag to McMahon about what he did to Bálor. McMahon was not impressed. He wanted Theory to use the world’s deadliest weapon. He took out a pencil and an eraser.

Miz TV with Miz and Maryse, with Edge as a guest ends when Miz threw champagne in his face and attacked, but Edge fought back and hit DDT. Edge was going for a Spear, but Miz used Maryse as a shield. Miz kicked Edge in the face and gave him a Skull Crushing Finale.

Maryse was not happy with Miz and slapped him.

In the main, Bobby Lashley over Big E in a non-title fight, in order to be part of the star of Day 1.