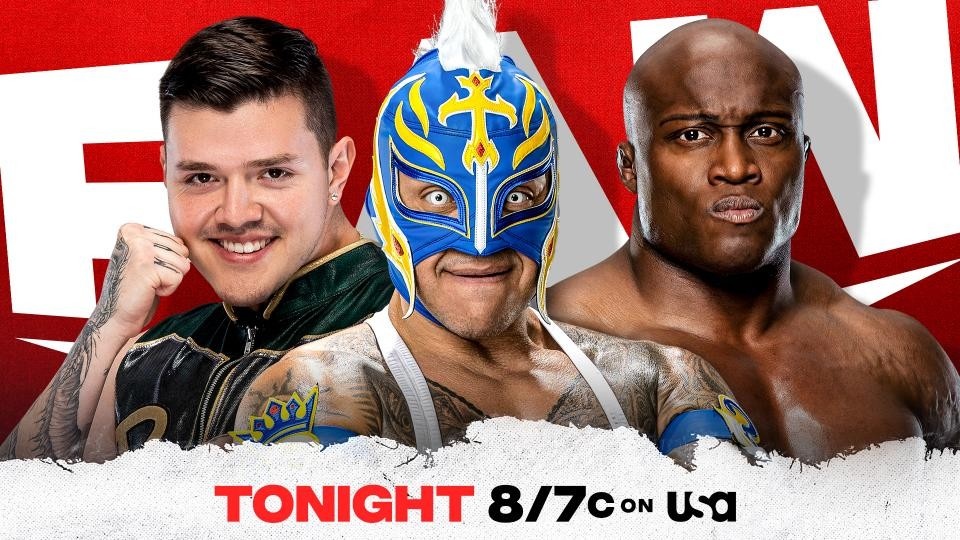 Review of the theft of Cleopatra’s egg owned by Vince McMahon last night at Survivor Series.

Vince McMahon is meeting with Adam Pearce and Sonya Deville, upset that he has no clues as to who stole his egg. If they can’t find him, they’ll be fired, Vince says. Whoever gets the egg can face Big E tonight, McMahon offers.

Kevin Patrick interviews Randy orton. Asks about Riddle, who should have a match but is not present. Randy is upset that he doesn’t know where he is, until Riddle shows up. The Original Bro has a vest like Orton’s, plus a matching beard and mustache. Riddle does an impression of Randy, until Orton gets angry and clarifies that he told him to be like him, not to dress the same or talk like him. Riddle says it’s late and goes out to battle to Orton’s music.

Riddle (w / Randy Orton) vs. Dolph Ziggler (w / Robert Roode)
Slow and measured start, Ziggler is the one who connects the first shots and looks for the account. Riddle responds with a rotating Gutwrench Suplex. Ziggler connects a mid-flight Superkick from Riddle to ringside. Returning from commercials, Riddle applies an Orton-style Powerslam. Dolph removes Riddle’s fake mustache and beard, going on the attack. Riddle connects a Knee Strike to stop Ziggler. He stalks him like Orton, setting up the RKO. RKO! 1 … 2 … 3!
Winner: Riddle.

Robert Roode enters to attack Riddle, but RKO-Bro ends up dominating the situation.

Becky lynch goes out to the ring. Lynch says that his confrontation with Charlotte Flair last night was the culmination of years of friendship, betrayals and fights. He states that yesterday at Survivor Series he came out with the intention of hurting Charlotte and managed to beat her to finally turn the page. “Now we are going with something new. Because you always like to see something fresh at the top,” says Becky, and then says that she does not care about people’s opinions. Becky makes fun of Liv Morgan, and thinks that the public supports her only because she is the novelty and the least favorite. Lynch closes saying that neither Liv nor anyone else will take away the championship.

Bianca Belair comes out to speak before her match with Tamina.

Bianca Belair vs. Tamina (c / Natalya)
Tamina takes the initiative but is quickly overtaken by Bianca. Suplex and Moonsault for the count of two about Tamina. Superkick and Samoan Drop for Bianca but it’s not enough. Bianca reacts by hitting Tamina against the post and finishes her off with the KOD.
Winner: Bianca Belair.

Doudrop appears to attack Bianca Belair after the fight.

Seth rollins talks about last night’s Survivor Series match, where he was the last survivor of Team Raw. Seth criticizes his teammates and considers that he fulfilled his destiny by charging the mark to victory.

Finn balor He enters for their match but Seth Rollins attacks him before the bell rings. Finn is not far behind and responds by pulling Seth out of the ring and flying over him. Seth takes control at ringside, slamming Finn into the barricade. Rollins takes the metal steps and attacks Balor. Seth applies two Curb Stomps to Finn before leaving.

The wrestlers keep running backstage looking for the egg.

Sami zayn Talk to Vince McMahon in his office. Sami claims to know who took the egg. Or at least have a 99.5% idea who did it. Vince asks him to bring the person before him.

Street Profits (Montez Ford & Angelo Dawkins) vs. AJ Styles & Omos
AJ is dominated by rivals and quickly takes over from Omos. Street Proftis get off the ring to plan their strategy against the colossus. Returning from commercials, Street Profits confront AJ. Montez applies a Suplex and Moonsault for the count of two. Pele Kick from AJ looking for Styles Clash, but Montez escapes. Omos enters, receiving the blows from Montez without showing pain. Omos is dominating Ford, when Angelo appears with a fire extinguisher. Angelo uses it against Omos!
Winners by disqualification: AJ Styles & Omos.

Dawkins uses the fire extinguisher against Styles before fleeing the ring.

Fight for the Women’s Couples Championships
Rhea Ripley & Nikki ASH (c) vs. Carmella & Queen Zelina
Carmella gets out to put on the mask as soon as the match begins. Rhea goes for her and takes control. Zelina enters and cannot with Rhea, who dominates her with her power. Relay for Nikki, Rhea runs to Carmella ringside while Zelina covers ASH. Carmella lands a kick on Rhea at ringside, sending it into the post. Nikki attacks Carmella from inside the ring, Zelina attacks her from behind. Carmella connects a Superkick and Zelina finishes with the Code Red.
Winners and new champions: Carmella & Queen Zelina.

Sami zayn carries Austin Theory before Vince McMahon. Austin apologizes for taking the egg, but just wanted to take a selfie. Vince ends up giving Austin a chance against Big E, because he says it reminds him of himself when he was young. Sami is enraged but Vince shuts him up, stating that no one likes snitches.

24/7 Championship Match
Reggie (c) vs. Cedric Alexander
Cedric hits Reggie hard at the start of the match. Reggie responds with a Hurricanrana that almost gives him the victory. Cedric’s Lungblower and a count of three.
Winner and new champion: Cedric Alexander.

After the fight, several wrestlers appear running towards the ring. Of nothing Dana Brooke makes him a Blockbuster and covers Cedric to become champion. The wrestlers stare at Dana not knowing what to do.

Dominik apologizes to Mistery King for not helping him last week against Bobby Lashley. Rey tells him that he doesn’t have to worry, and reminds him of the giants he has faced throughout his career. “I don’t need you to fight for me. But tonight, you fight by my side. We do it for ourselves, for family and for race,” Rey says.

Dana Brooke is interviewed backstage. He says tonight he saw an opportunity and took it. “Now is my time to show who Dana Brooke is”, closes the champion.

Dominik & Rey Mysterio vs. Bobby Lashley (w / MVP)
Before the fight begins, MVP takes the floor. He says he respects Rey as an icon of the fight, but as a father he leaves much to be desired. He says that Rey’s ego will kill her son, and asks him what he will say to his wife when Dom gets hurt because of him tonight.
Dominik charges at Bobby but can’t handle him. With short relays they manage to corner Bobby momentarily, but the All Migthy surpasses them and takes control of the ring. Returning from the break, Bobby punishes Dominik against the ropes. Lashley charges Dom and smashes him into the post. Rey receives the baton and throws himself at Moonsault, but Bobby catches him. Dom helps his father apply a DDT and searches for the account without success. Double 619 over Lashley and Double Frog Splash but not enough. Spear for Rey and Hurt Lock to make Dominik perform.
Winner: Bobby Lashley.

Big E is interviewed backstage. He says he disappointed a lot of people with his Survivor Series loss, and that he can’t blame anyone but himself. He adds that he doesn’t have to worry about Kevin Owens or Seth Rollins, but about Austin Theory, whom he will defeat tonight to walk away with the title.

Liv morgan she is being interviewed but is approached by Becky Lynch, who criticizes her for having lost at Money in the Bank and never having touched the title. Liv says she did it last week, Becky replies that when she does autograph signings she also lets the kids grab the title. The tension builds until Liv attacks Becky, but she quickly stops. Lynch is surprised when Morgan leaves.

Damian Priest come out to do your open challenge. Apollo Crews goes out with Commander Azeez to confront Priest. He says that Damian is ashamed of who he is and that is why he has like two personalities, unlike him, who has fully embraced his Nigerian origin. Apollo keeps talking until Damian gets fed up and challenges him to a title match, but Crews says it wouldn’t be fair to do it where Priest is local.
Sami Zayn comes out ready to accept the challenge that Crews rejected, not without first talking about the conspiracy that he considers to be against him.

Fight for the United States Championship
Damian Priest (c) vs. Sami zayn
The fight starts with intensity and they quickly go to ringside. Upon returning Damian connects several blows and takes control. Sami responds with a Blue Thunder Bomb but they don’t get on a count of two. I struggle on the heights until SAmi applies a Sunset Flip Bomb. They trade blows and Damian gets the better of it. Sami punishes Damian with the middle rope from ringside and goes for the championship. Priest is enraged by Sami’s disrespect and destroys him with a South of Heaven and Reckoning to claim victory.
Winner: Damian Priest.

Austin Theory He says that tonight he will become the youngest champion in history. He acknowledges what Big E has done, but says that at Survivor Series he was a big loser. “I am the future, and the future is right now,” he says.

Seth rollins He goes out to observe the combat closely.

Fight for the WWE Championship
Big E (c) vs. Austin Theory
Austin stands confident before E and slaps him. The champion charges with elbows and takes control of the match. Kevin Owens also comes out during the match. Austin takes advantage of the distraction and applies a Neckbreaker to Big E for the count of two. Returning from commercials, Austin applies a DDT and searches for the account. E responds with three Belly to Belly Suplexes and one big Splash. Austin avoids E causing him to crash into the post and lands a Dropkick for the count of two. Theory stops the Spear with a knee but receives a Uranage later. Seth attacks Big E’s leg from ringside without the referee seeing him. Austin takes advantage and connects a DDT. KO throws Seth into the ring, the match stops as Rollins and Owens argue. When Austin returns for E, he receives a Big Ending and the count of three.
Winner: Big E.

Owens and Rollins push at ringside until Big E is going to attack them both. Big E ends up dominant in the ring.