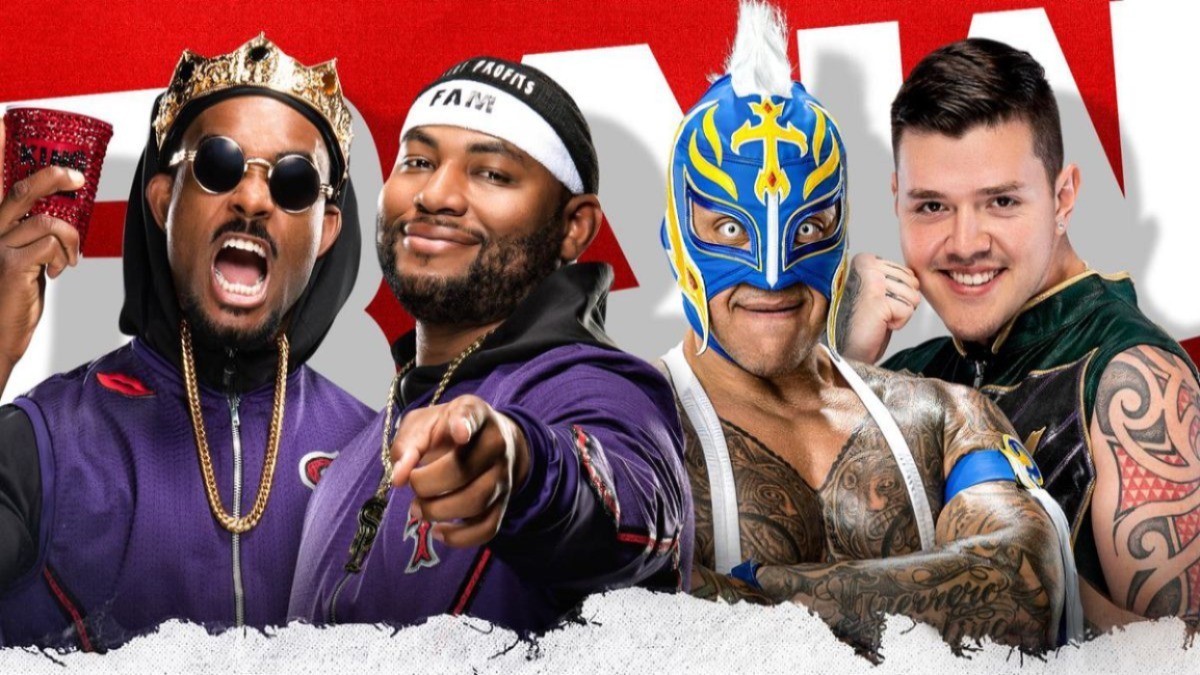 RK-Bro they open the show while reviewing tonight’s confirmed matches.

Riddle arrives with a party hat and a Christmas postcard, which Randy orton refuses to drink. Randy says the only way to have a Happy New Year is if he beat Otis tonight, and if they retain the Couples Championships in Day 1. Randy asks for a replay of his crossover with Otis last week, Riddle marvels to see Orton get a video on the big screen and says it might be impossible to RKO Otis.

Chad Gable and Otis they interrupt them. Chad claims that there is no man more dangerous than Otis, his exemplary student, his protégé. Gable talks about his college degree and is considered very advanced for a town like Detroit. “Regardless of the outcome on Day 1, those titles will end up on the Alpha Academy waists,” says Chad.
Riddle taunts them and challenges Chad Gable to a fight right now.

Riddle (w / Randy Orton) vs. Chad Gable (c / Otis)
Chad punishes Riddle’s leg when he comes back from the break. Tiger Suplex and count of two on Riddle. Chad launches into Moonsault, Riddle catches him for a Triangle but Chad manages to get out and pass an Ankle Lock. Riddle escapes from Chaos Theory and connects a brutal Knee Strike to finish off with the Floating Bro later.
Winner: Riddle.

After the fight, Otis enters the ring to overwhelm Riddle.

Randy Orton (w / Riddle) vs. Otis (c / Chad Gable)
Otis takes control at the start of the match after applying a Splash. Randy looks for an RKO but Otis pushes him out of the ring. Otis goes for him but ends up crashing into the metal steps. Orton greets him with his classic DDT when he returns to the ring. Otis applies a Body Slam and looks for height. Vader Bomb from the second rope, Randy dodges and finally connects the RKO.
Winner: Randy Orton.

Kevin Owens is interviewed. KO responds to a video of Big E assures that he has not come that far at all and that he will leave Day 1 as WWE Champion. Owens says E is wrong. “He says that from home, but I’m here. This time the story is about me. So far everything has gone according to my plan,” says Kevin.

Mixed Combat of Couples
Dana Brooke & Reggie vs. R-Truth & Tamina
Reggie demonstrates his agility by facing Truth early in the fight. Relay for Taimna, who connects a Superkick to Reggie. Dana walks in and kicks Tamina, who responds with a powerful elbow. The men re-enter so that Reggie quickly covers Truth.
Winners: Dana Brooke & Reggie.

Tamina gets mad at R-Truth and tries to attack him. Tamina goes after Dana but like Truth she manages to escape.

Fight for the final of the RK-Bronament tournament
Street Profits (Montez Ford & Angelo Dawkins) vs. Rey & Dominik Mysterio
Montez and Dominik start the match for a few moments, but soon their teammates enter to increase the pace. Angelo stops Rey, Montez joins the attack and takes over. Rey dodges a kick and together with Dominik they apply a Double Russian Leg Sweep. Rey takes both rivals out of the ring and throws himself with Dominik on them. Angelo and Rey take over when they return from the break, Mysterio applies a Crossbody for the count of two. He prepares the 619 but Angelo stops him with a Back Elbow. Dawkins catches a Moonsault but receives a Tornado DDT, Montez breaks the account but receives a Neckbreaker from Dominik. Swinging Neckbreaker to Rey and Montez’s Frog Splash. 1 … 2 … no! Dominik saves his father just in time. Rey escapes from Montez and connects the 619. Hurricanrana to Angelo at ringside while Dominik finishes off Ford with a Frog Splash. 1 … 2 … no! The Mysterios search for a Double 619, but Angelo grabs Rey from outside the ring. Dominik fails to fully apply it and ends up at the mercy of an assisted Blockubster from the Profits.
Winners: Street Profits.

Street Profits will face RK-Bro for the Raw Tag Team Championships on Day 1.