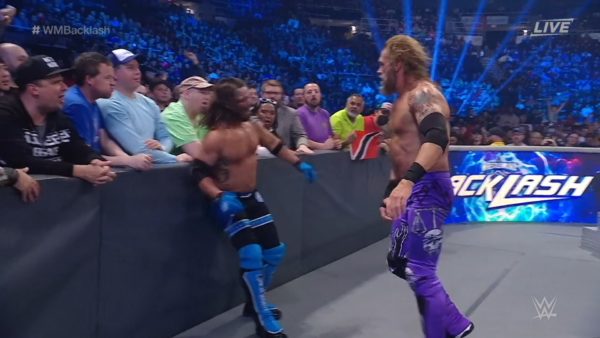 The long-awaited fight between Edge Y A.J. Styles He arrived at WrestleMania BackLash 2022, looking for the winner to be given without interference.

At WrestleMania 38, the appearance of Damian Priest cost the Phenomenal the fight and since then Styles began a war against what is now known as The Judgment Day.

Fortunately for him, on the last RAW show he managed to beat Priest and prevented him from appearing at ringside with Edge in their match.

Styles started quickly attacking his rival wanting to attack him at all times, to get revenge for everything the Category R Superstar has done to him.

However, soon an error caused the balance to change sides so that Styles began to be punished in a bad way.

The Phenomenal’s arm was the place chosen by his rival to attack him, because Egde knew perfectly well that he was hurt.

Despite this and not being able to use his arm in all his punishments, Styles did not give up and was very dangerous, putting Edge in trouble.

However, the Hall of Famer managed to remove one of the protectors from a cornerback, but he was the one who ended up crashing. But this was not enough to finish him off.

Edge and Styles shared a Spear and a Styles Clash, but the two rivals managed to break the count.

Although Priest did not approach the ringit did distract Styles for a moment, but Finn Balor came to take it away; however, the referee was distracted when she saw the brawl between the two and that was taken advantage of by a hooded man arrived to knock Styles downwho was trapped in a neck and arm lock, until he passed out.

After achieving victory, Edge revealed that the hooded person was rhea ripleywho joins The Judgment Day.