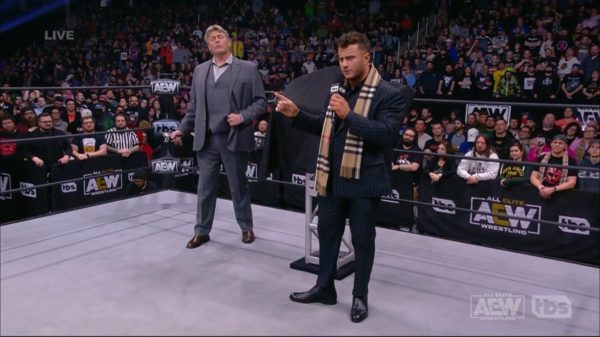 William Regal He was fired from WWE on January 5 of this year, ending a 22-year career with the company. After he concluded his no-compete clause, he appeared on AEW, quickly joining Jon Moxley, Bryan Danielson, Claudio Castagnoli and Yuta Wheeler to form the Blackpool Combat Clubuntil he decided to betray Moxley to help MJF win the AEW World Championship in Full Gear.

► William Regal’s contract with AEW would expire this December

Although William Regal helped MJF win the AEW World Heavyweight Championship in Full Gear, in the recent AEW Dynamite, the current monarch betrayed him and attacked him, leaving him lying in the ring. Obviously this caused a great surprise among all the fans, who saw how a partnership that could thrive in AEW went overboard in such a short time.

In this regard, MJF’s betrayal of William Regal would have a background, since this could mean his last appearance in AEW, and Tony Khan could have pulled off TV with this situation.

Sean Ross Sapp reported via Fightful Select that William Regal could already be out after what happened in the recent AEW Dynamite. The same source added that the British contract would expire in this month of December.

«Talents believe that William Regal’s AEW deal could end in December of this year. This was also speculated at the WrestleCade event last weekend.”

This was corroborated with another source, PWInsiderwho indicated that William Regal would return to WWE to work with Triple H in a backstage rolesomething that he had already done during his previous stay in NXT.

“Everything indicates that William Regal, 54, will join World Wrestling Entertainment shortly. Although we haven’t heard anything official from the company, there have been rumors within WWE of late about Regal’s return in a backstage role. That would mean Regal would be leaving AEW, where he certainly looked like he was written out of the storylines last night on Dynamite, after being attacked by AEW champion MJF.”

There is still no official confirmation on the situation of William Regal, but the fact that Triple H has taken over creative control of WWE definitely opened the window for a possible return of the Briton, who has already worked under Triple H on NXT and he might as well have received a great offer. We will have to see what happens, but certainly What happened in the recent AEW Dynamite can say more than what we saw on the screens.

William Regal would be ready to return to WWE