After several weeks of being absent for Veer Mahan’s attack, Mistery King and Dominik finally return to raw to face the one who left them in the hospital.

tonight of monday night raw the champion of the United States was supposed to Theory will face Mustafa Ali, however the champion said they would need to have a special referee for this match and that was The Miz, also revealed to him that he was not his opponent but he would face Veer Mahan right now.

The lion of India was preparing to destroy Ali supported by the injustices of the partial referee The Miz, Theory watched everything very happy and put his hand from time to time, despite everything Ali faced Mahan with powerful kicks with which he did not even let him enter the ring, but no matter how hard he tried, defeat was imminent.

Veer Mahan puts Ali under his lock and he has no choice but to surrender, The Miz and Theory even arrive to celebrate the moment with a selfie although what they did not expect, especially Veer Mahan was the return of two familiar faces with whom he had unfinished business. 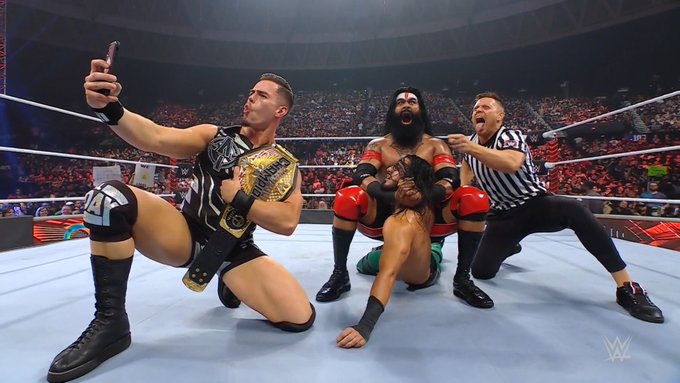 They appear out of nowhere The Mysterios running to the ring to focus on the lion of India, these have not forgotten the beating he gave Domink that left him on a stretcher and the attack on Rey, together they manage to reduce Mahan to make it known that they came back to seek their revenge, incidentally they helped a poor Mustafa Ali who was lying defenseless on the canvas, we will see if in the coming weeks Australian relays of 3 vs 3 are put together.

Thank you for sharing and enjoying this passion with the team at PLANET WRESTING. Remember to follow us in our RRSS, and here on the web to have the best information on wrestling, the world of wrestling in Spanish, interviews, videos, the best coverage and live monitoring. Remember that you can directly access the rest of the news from the HELL IN A CELL PPV Already all WWE news.

The Mysterios make their return on WWE RAW