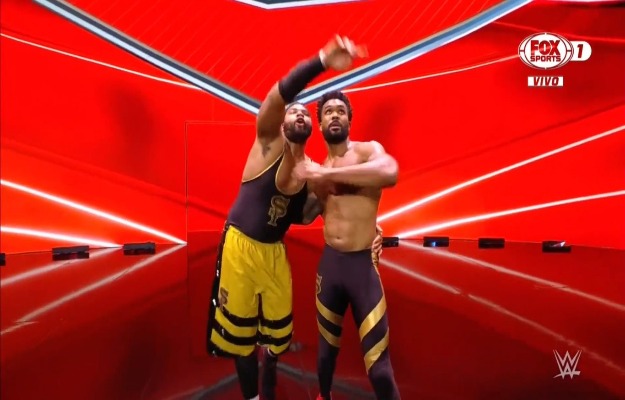 To decide who will be the next challengers for the RAW tag team championships from RK-BRO tonight starts a tournament with 4 teams, which of them will be the next to have a chance before Randy and Riddle.

There is no doubt that the work they have done the viper randy orton and the original bro Riddle doing the RK-BRO team has been so successful that they are one of the most seasoned tag team champions of all, that’s why tonight begins a tournament called “RK-BRONAMENT” to determine who will be the next challengers for the Randy AND Riddle tag team championships and the first to face off are Aj Styles and Omos vs. The Street Profits.

The fight begins with Angelo Dawkins taking absolute control over the phenomenal Aj Styles while tag team champions watch everything from the comment table, for quite some time Omos is unable to do anything until he returns from commercials the giant enters the ring and pulverizes Dawkins with which the hopes for his team return.

The Street Profits advance to the final

Hardly the replacement by Street Profits occurs and Montez and the same happens with Aj Styles returning to combat, Montez Ford shines and puts Styles at a disadvantage again until Omos steals the baton and furiously begins to punish his challengers, However, he goes out of the ring and forgets about 10 and for that, The Street Profits advance to the next round of the tournament.

Problems between Aj Styles and Omos

After the fight we can see that Omos leaves frustrated and does not respond to the voice of his partner Aj Styles, another misunderstanding which means that we are possibly on our way to witness the separation of this team.