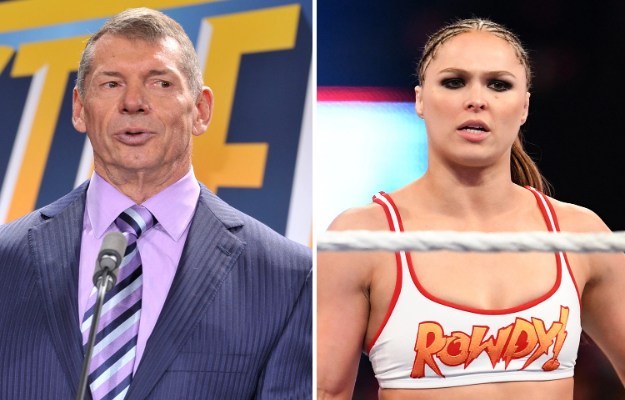 Almost a month ago we had one of the surprise returns to Vince McMahon’s company. The Baddest Woman on the Planet made an appearance of her in WWE Royal Rumble 2022. Ronda Rousey made her return inside the Women’s Royal Rumble to end up being the last survivor. However, now the fighter will tell her feelings after her return.

Ronda Rousey had a great talk with Vince McMahon

On your own YouTube channelRonda Rousey was encouraged to comment on various issues related to her return to the company. The WWE fighter openly expressed her thoughts on the criticism of fans towards her. Ronda talked about her reasons for leaving the company and also about her recent return. Likewise, she revealed an important conversation that she had with Vince McMahon about the negativity of the WWE public.

“Everyone was booing me outside the stadium. I was like, ‘Man, fuck these people, I can’t wait to go home.’ A lot of people have forgotten because I haven’t been there and they have little memory about such things. When I decided to leave WWE, I was booed outside the stadium every day for several months. I think it was one of the most awkward and fake moments I’ve ever felt when I had to become a babyface while people were being very hostile towards me.

I couldn’t tell them exactly what I felt at that moment. I was caught between: ‘Do I stay true to myself until these people get screwed or do I decide to pay respect to Vince, who has done so much for me, and not go against what he wants me to do?’ So when I was finally able to become a heel I loved it because I felt like I could finally be me.

I really missed wrestling, I wanted to go back. I knew he would come back or thought I wanted to because of the animosity with which I left. From the beginning I left feeling super defensive. At Royal Rumble, it wasn’t like that, but I assumed the crowd reaction was surprise. Therefore, coming out on RAW, Becky (Lynch) was going to find herself there. I was like, ‘Okay, this is when they’re going to pick on me the most. This is when they will try to yell at Becky every time she tries to speak.’ This is the time when they are going to yell the most hurtful things they can. This is when they are going to bring the posters with the most painful things they can think of. I went out anticipating that, and everything ended up going well.

I got over it and got out. Paul Heyman told me: ‘You did very well, but I’ll tell you. He will tell you one thing, to smile.’ I was like, ‘Okay, so I’m going to talk to Vince.’ He told me: ‘That was fantastic, I just need you to smile.’ He was now commenting to him: ‘They were booing me when he left each stadium.’ He says: ‘Yes, but you have been forgiven for that.’ I’m like, ‘Well, I haven’t forgiven them. And he replies: ‘But it’s not about you. It’s about them.’

It was such a good point that I had been thinking about myself and how this relates to me, but I was forgetting that this is a show to entertain you. I was like, ‘I got the jitters out of me, my first performance out of the way, my first promotion out of the way.’ Going into the SmackDown show next Friday I’m going to think, ‘I’m not going to come out so cautious and defensive.’”