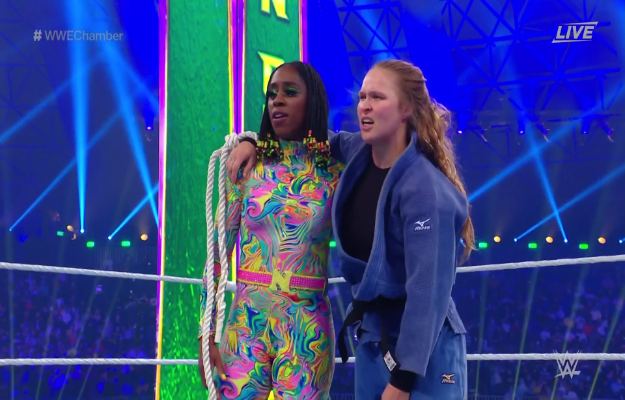 From Saudi Arabia in Elimination Chamber we have the great fight between Ronda Rousey next to Naomi vs. charlotte flair and Sonya Deville, the champion seeks to give her a preview of what your fight will be in Wrestlemania.

When Ronda Rousey made her comeback in Royal Rumble and confirmed that at WrestleMania 38 has women’s champion Charlotte Flair as her target, their rivalry has expanded to that of Naomi and Sonya Deville so a team fight was agreed among these 4 women in Elimination Chamber, Added to this is the special stipulation that Ronda Rousey will have to fight with one arm tied behind her back

Dog @RondaRousey succeed in this match with one arm tied behind her back?#WWEChamber pic.twitter.com/7tBy9Xv7iu

To start the combat in effect the referee proceeds to tie Ronda’s right arm, she would start with Sonya Deville who takes off her sling and reveals that she is completely fine, she begins by quickly attacking Ronda in the corner but she gets rid of it and dominates Sonya, Ronda asks Charlotte Flair to enter and she grants it so we see an anticipated fight between them.

Then we also see Naomi and Sonya Deville continuing their rivalry in the ring, things seem to get complicated for the baddest woman on the planet for being at a clear disadvantage, however nothing stops her and he regains control of the match for his team by attacking Sonya with one hand.

To get this over with Ronda puts Sonya on her arm-bar and just as he promised, he prepared to rip off his other arm, quickly Sonya surrenders for the punishment so the team of Ronda Rousey and Naomi triumphs, all this while Charlotte Flair watches everything from outside the ring with his eyes set on his opponent for WrestleMania.