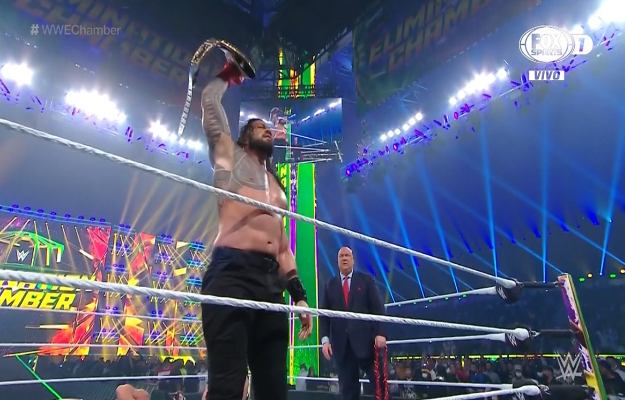 From Saudi Arabia we witness Roman Reigns defending his universal championship against the icon Goldberg on Elimination Chamber, Will the legend overthrow the tribal chief.

Goldberg is the next challenger for Roman Reigns

Facing Elimination Chamber we could see the legend Goldberg return to face the universal champion in an episode of smackdown, the icon told Roman Reigns that he is the next one because in Saudi Arabia he goes for his title, the fight that we could never see at WrestleMania 36 in 2020 finally takes place tonight from Jeddah.

Both opponents open the show with their match and once the bell rings they begin measuring their strength in the ring, Roman attacks Goldberg with blows who tries to recover and after receiving punishment surprise with a spear that weakens the tribal chief, shortly after Roman tries to apply his own spear but incredibly Goldberg invests it.

Roman Reigns does not give up and inverts a jackhammer turning it into a neck lock, he weakens Goldberg by squeezing hard to the point that they fall to the ground together, despite the fact that hopes were maintained that he would recover when the referee checks it, it had already faded, the bell rings and Roman Reigns retains the universal championship.

In a fight that did not last long, the tribal chief continues his reign once again suddenly defeating hall of famer Goldberg, this gives Roman a free pass to get to WrestleMania 38 as universal champion, It is still necessary to know if his fight against Brock Lesnar in said event it will be with the mixed WWE championship, that depends on what happens later when the men’s Elimination Chamber takes place with 6 other super stars locked up.