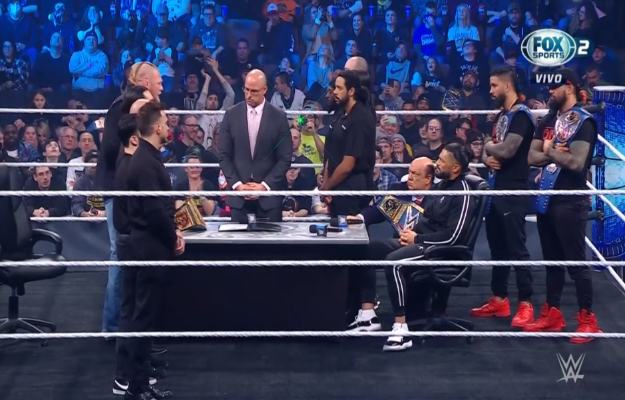 Tonight at the blue brand show smackdown, the maximum champions of the company Roman Reigns and Brock Lesnar they are face to face in their contract signing, in this way it is 100% official title fight for title in WrestleMania 38.

After what happened in Elimination Chamber with the beast incarnate achieving the feat of winning his fight inside the chamber eliminating all the competition to regain the WWE championship securing a fight champion vs champion at WrestleMania 38, Tonight in Friday Night SmackDown both champions face each other to make their fight completely official with a contract signature.

Make your entrance first the universal champion Roman Reigns accompanied by The Bloodline, Pual Heyman begins by giving a promo stating that this fight will be more epic than several great fights in the history of the great event, the result will always be with the tribal chief emerging victorious.

The beast incarnate makes its entrance in a very calm and addresses Roman Reigns and Paul Heyman telling them that he wants to control himself during this signing, Lesnar threatens Roman that no matter how much security you find in the ring that will not prevent you from beating him up, and the same goes for the WrestleMania event.

The WWE Champion is LIVE on #SmackDown @Brock Lesnar pic.twitter.com/ychKe3ucqp

Roman Reigns proclaims himself as the champion who controls the company

After both put their signatures, Roman Reigns is about to give a promo in which he highlights that he is the head of the table and controls all of WWE so the ring is his, the public also because they recognize it, everything even security in the ring which attacks Brock Lesnar.

Despite the numerical difference this is nothing to Brock Lesnar who destroys each and every one Of those who are in the ring, Roman Reigns only leaves observing everything a little scared and Thinking your words very well.