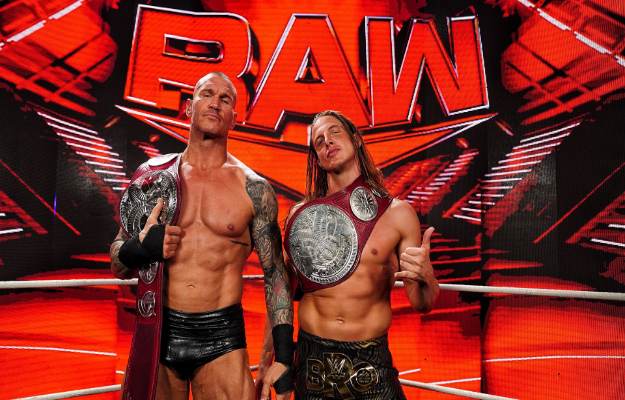 Tonight we finally have the triple threat for the tag team championships raw Come in Alpha Academy vs. seth rollins and KO vs Riddle and Randy Orton, one of these three teams will come out with the gold of the red mark.

Since the team of RK-BRO they lost the RAW tag team championships, your search for an opportunity to get your title backs from the hands of Chad Gable and Otis from Alpha Academy, in the middle the team Seth Rollins and Kevin Owens managed to get involved in the fight making her a triple threat that after weeks postponing, finally tonight we will be spectators of it.

The roads to #Wrestlemania for these teams could very well change tonight on #WWERaw with the #TagTeamTitles on the line! pic.twitter.com/OgoKZRPoBI

With the three teams gathered in the ring, the fight finally begins, Riddle and Seth Rollins begin the attacks and the original bro is harmed with the inclusion of KO, Chad Gable doesn’t want to be left behind. and joins the fight but only receives punishment from Owens and Rollins, andThe domain continues to belong to this duo and they are close to taking the victory but their rivals do not give up.

Continuing the fight is the indomitable Otis who commands respect by putting everyone in the ring under siege, despite being able to get the count of 3 on Riddle at one point, he refuses to end the fight and they continue dealing with RK-BRO, this will eventually cost them dearly and Randy Orton finally enters to attack everyone.

The viper pulverizes everyone and applies a modified double RKO in the ring, after announcing the RKO he manages to apply it to Seth Rollins almost made it to the count of 3 though KO makes the rescue but as a consequence Randy comes out to hit him and smash it against the table, with the help of Riddle they manage to do the same to the great Otis and the public celebrates.

The current champions still want to retain the championships and Chad Gable battles Riddle, KO interferes and Randy Orton while at the same time Otis returns already recovered, victory was in the pockets of Alpha Academy if it hadn’t been for Seth Rollins, with the help of his partner they build a tower but The one who is in charge of knocking her down is Otis punishing everyone.

RK-BRO recover their championships as a couple

With everyone lying on the ground a pitched battle begins both inside and outside the ring, things are normalized and the victory is tilted for any team, Kevin Owens and Seth Rollins combine to weaken Gable and leave it ready for coveragehowever quickly Riddle takes advantage and he covers the rival, 1 2 3 Randy Orton and Riddle win the RAW tag team championships, after this both are perplexed and do not know what to do now.