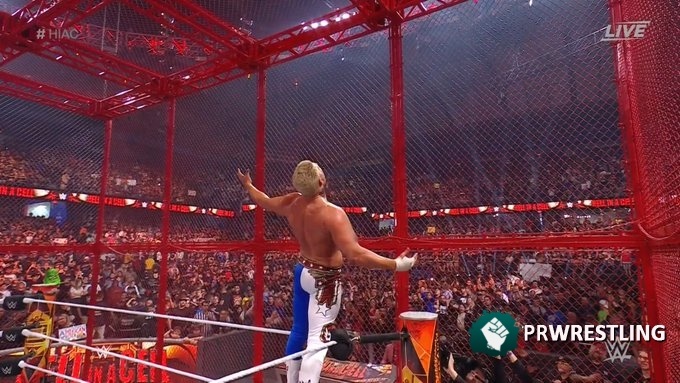 WWE held Hell in a Cell on Sunday night in Chicago.


Triple Threat Match: Bianca Belair defeated Asuka and Becky Lynch to retain a good fight. The end came when Lynch manhandled Asuka, Belair stepped in and took out Lynch, stealing her pin for the win.

Behind the scenes, Cedric Alexander approached MVP and Omos. Alexander tried to devise a strategy. MVP told him that Hurt Business won’t get back together because he let him down too many times. Omos told Alexander to go away.

2×1 Handicap Match: Bobby Lashley defeated Omos & MVP when Omos went for a chokeslam, but Cedric Alexander jumped into the ring. Omos caught him and kicked him out. Lashley speared Omos and pinned MVP with Hurt Lock for the win.

In the back, Lashley walked up to Cedric Alexander. Alexander noted that he did it for himself, not for Lashley. He was only defending himself. Lashley appreciated that, but told him not to get involved in his match again.

Hell in a Cell: Cody Rhodes ceded Seth Rollins. Cody showed a giant bruise which covered part of his chest and right arm. This limited his movement, but not enough to affect combat.

Rollins came out in a black outfit with yellow dots, alluding to the “American Dream” Dusty Rhodes.

The victory of the fight in effect was the state of Cody, who suffered heavy punishments with straps and lance through a month. Cody wins after hitting him with two Crossrodes, followed by a marronazo for the victory.

UNBEATABLE! @CodyRhodes will not go away! #HIAC pic.twitter.com/aCWnQb2D7i