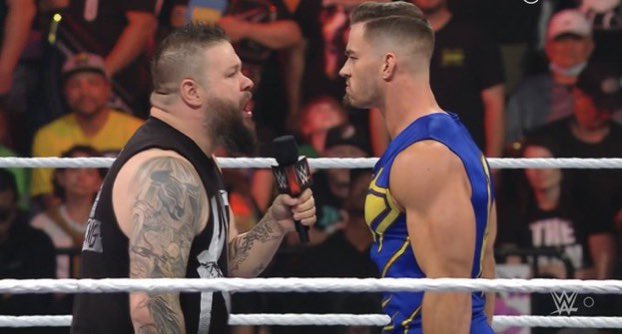 In the most recent edition of Raw, a match between Kevin Owens and Austin Theory took place in the midst of the rivalry that Triple H has been working on. Owens wanted to enter the ring, but He surprised Owens with a good punch that knocked him into the protective barricade.

Owens managed to get into the ring and went over the top with several punches to Theory, then hit him in the chest on the corner, but Theory’s dominance was recovered with several kicks to the abdomen and face. Theory then pressed the Canadian hard with his knee to the face.

Theory then received a senton bombshell from Owens, and when Owens wanted to finish him off with a cannonball, he left the ring. Owens went after him, but they tackled him to the edge of the ring and threw him face-first into the announce table.

Owens returned the favor and threw his rival face-to-face against the cornerback, who received the protection count of 10 outside the ring. Owens was going to leave the ring, but Theory hit him in the leg and applied a stripper, landing hard on the floor at ringside before we go to commercials.

Upon returning, Owens threw Theory to the canvas and held him prisoner in a neck lock for almost two minutes. Owens broke free by punishing his nose and kicking him in the abdomen and left Theory lying on the canvas with a DDT. Owens applied a knee to Theory’s crotch and applied a tremendous bow to his neck that gave him a count in two seconds.

Owens lifted Theory into the air, but Theory landed on his feet and landed a right hand on the Canadian. Owens countered with a Superkick and dove off the corner with a Super Cannonball for a count in two seconds. Owens is He went up to the corner and endured several slaps from Theory, until Owens headbutted him and threw him to the canvas.

Owens surprised with a tremendous moonsault, however, he could not connect it and Theory did apply another stripper, but the referee’s third slap did not come. Theory kneed Owens in the back of the head after throwing him to the canvas, but Owens withstood two quick counts.

Theory was going to take his Money in the Bank 2022 briefcase… but Johnny Gargano appeared and took it from him. Kevin Owens took the opportunity to give him a Superkick and a cannonball followed by a Stunner to obtain the victory by count of three. After the contest, Gargano attacked Theory.