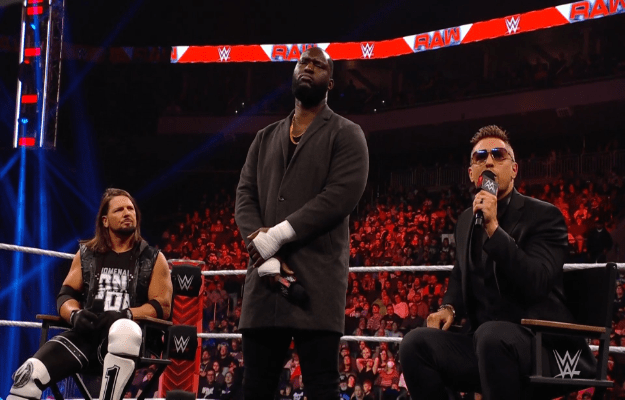 The giant’s team Omos and the phenomenal Aj styles seems to have come to an end during this edition of Monday Night RAW, the companions have had an altercation in the ring where their separation seems imminent.

Omos and Aj Styles’ team has come to an end

Since the arrival of the great Omos allying with the phenomenal Aj Styles it has been a union that has dominated the division as a couple, even having a reign for the RAW tag team championships, however in recent weeks they have had some differences that have harmed them in the ring and this was talked about tonight on Miz TV, where The Miz heated things up the most by stating that Omos himself has said that he no longer supports Aj and would have no problem shining with his own light.

The interview ended because Styles and Omos vs. The Mysterio was about to start, the phenomenal one is the one who starts the action and dominates the match but when he started to have problems he offered the tag to Omos but he ignores it and does not even see him in the eye, This causes the Mysterios to cover the phenomenal and take the victory.

After this Aj Styles claims to his partner what was happening but he continues to ignore him, finally Styles gets tired of him and attacks him, Omos responds by pushing the phenomenal and reversing his attacks by crashing him onto the mat and taking the microphone telling him that the next time I see him it will be for a fight in the ring.