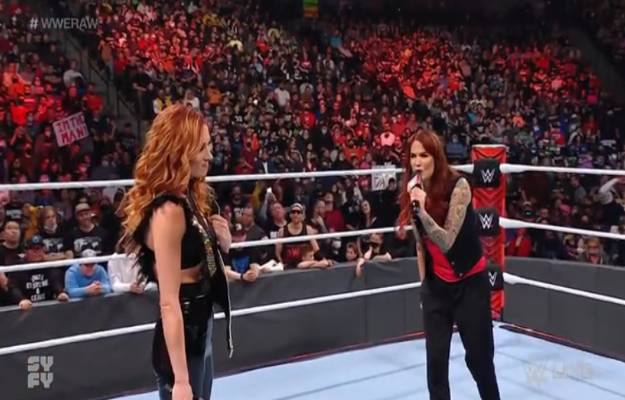 the female champion becky lynch stood face to face in front of the challenger for her title in Elimination Chamber, Lita and Big Times Becks have an altercation before this big match.

Lita talks about her title fight in 15 years

Last week Becky Lynch left without getting a response from Ronda Rousey for a challenge for the women’s championship of their choice, however, to the surprise of many, the hall of fame member Lita appears to suggest a challenge to Becky in Elimination Chamber, after hesitating a bit the champion accepted the challenge and tonight this continues with Lita again in the red show to talk about this fight.

The time comes when Lita makes her entrance and is applauded by the public, she says that She feels very excited to face one of the greatest champions in history and that he feels that he still has what it takes to be able to defeat her and that will lead her to be 5 times female champion in her career.

The women’s champion comes to share a few words with her challenger telling her that her time has passed but that in her time, she was the female that Becky admired, all the time when she was a child Lita was the one who inspired her, but in the present it is Becky who runs the women’s division and that she doesn’t have what it takes to match her.

Lita gets tired of hearing this but before she can answer her, Becky Lynch ruthlessly attacks her to put her on the ground and humiliate her, but when she turns around very confident Lita recovers and attacks to show you that you do have gas in the tank.

we see a swan senton bombshell and a Twist of Fate with which the one that leaves the champion very badly in the ring and making her think twice about what awaits her on January 19.

Lita and Becky Lynch have a fight on WWE RAW