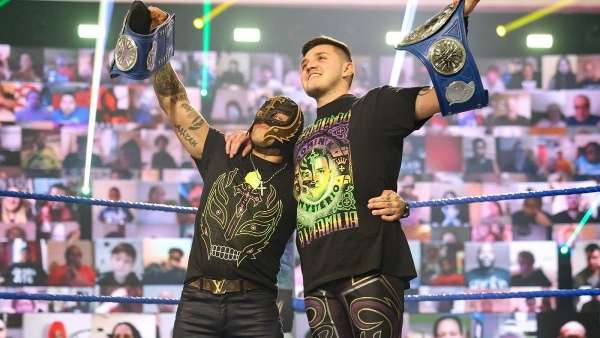 Interview with Dominik Mysterio | This week PLANET WRESTLING, the WWE website in Spanish Y Daily Ace had the opportunity to interview exclusively the wrestler Dominic Mysteriowho told us about his father Rey Mysterioof his career, of his appearance in WWE 2K22 and many other topics.

Would you like your Wrestlemania moment with your father to be with him and against him?

I would like you to go with him. It is something very special because he is not only my father, he is also a friend and a mentor. He is a legend and the truth is that I have tried to follow in his footsteps as best as possible. I would not like to face him because he is a legend who has done a lot for this sport and I prefer to have him by my side.

Do you want to recover the championships in pairs?

What was it like debuting in 2020 without an audience? How has the public welcomed you on your return?

Everything went very fast for me. I went from helping my dad with his bags to wanting to see me against Seth Rollins on television. When my dad proposed it to me I thought it was a joke, but it was a reality. It was a great blessing and everyone told me that the adrenaline with the public was much greater. We got to SmackDown and when I first came out to the public it was phenomenal that I can’t explain. How they received me and my father was tremendous. I am very blessed and very grateful.

Did you ever think about getting to NXT before going to the main roster?

I accepted what they told me to go to the main roster directly. I thought I was going to go to the independents, pass a tryout on NXT and make the main roster. I imagined following that path, but it turned out differently. I would love to go to NXT to face Santos Escobar. I have my sights on the tag team championships, but I would like to work with the Ghost Legacy.

It is a great blessing that they have given me, something very crazy. Never in a million years did I think I was going to be in WWE 2K22 with my dad on the cover and me as one of the playable characters. Maybe there if I take it out on my dad a little. I’m going to choose him first, I always choose him… although this time I’m going to choose myself.

Of course. If not, who is going to stop Roman and The Usos? On top of that, his other brother is going to arrive and a large group of Latinos is the only option to stop him. If we Latinos like Garza, Legado del Fantasma, my dad, me… we are going to defeat them.

What would be your dream match at Wrestlemania without your father in mind?

Right now against Roman Reigns. He is the mere mere of the company, the one with all the power. He has the championship and his family, but if it’s not him and I would like to face Seth Rollins. We still have a pending story, because when we fought he caught me without experience. I want a heads up against Seth Rollins.

Thanks to Dominik Mysterio for his time

Interview with Dominik Mysterio: “The LWO can finish off Roman Reigns”