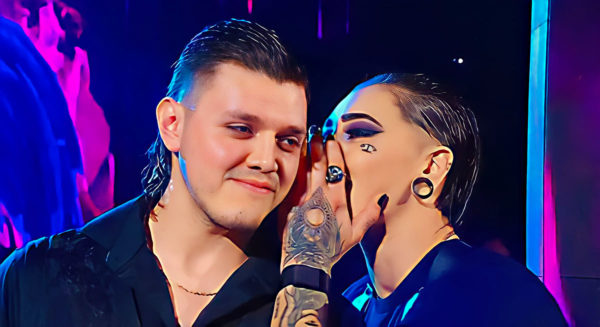 During Thanksgiving Day, Dominik Mysterio visited his parents with rhea ripley, who were celebrating this holiday. When they arrived, Dominik’s mother appeared first, who was surprised to see Rhea, and then it was Dominik himself. Mistery King the one who confronted the members of The Judgment Day, asking them to let them celebrate in peace. As soon as Rey closes the door, the former Raw Champion bursts in and that distraction allows Dominik to land a couple of punches on his downed father. Later, the two proceed to focus the punishment on Rey’s injured foot, who was wearing a protective boot.

Dominik Mysterio and Rhea Ripley were guests in the recent episode of WWE The Bump, where they discussed a wide variety of topics. Hilariously, Dominik attributed the reason for his attack to the fact that his father put up the Christmas tree before the end of November.

“Because she had her Christmas tree before the end of November and she honestly doesn’t deserve to live in peace. I had to live with his shadow all my life. So I hope to cast a big shadow over him and continue to torture him as much as I can.”.

Rhea Ripley also chimed in saying they just wanted to have a nice family reunion but when Rey disrespected and insulted her, they had to “teach her a lesson”.

“It was great. We went in there trying to be nice, trying to be civil. We were hoping that we could have a nice little family together and spend Thanksgiving together., enjoying it. But you know, Rey, once again he closed the door on Dominik. He disrespected me and Dominik by closing that door, so he wasn’t having it. Then of course he insulted me and Dominik snapped. That’s what happens when you’re a bad influence in front of the kids at the table. He’s trying to get the spotlight once again for himself, and we’re not going to stand for it.”

Dominik Mysterio justifies the attack on his father at home