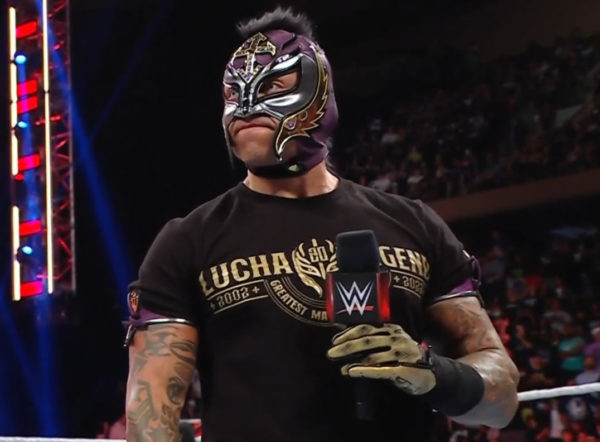 It was expected that Mistery King be part of the World Cup tournament that it will determine a new challenger for the Intercontinental title due to a report that revealed the names of the participants in advance; nevertheless, in the official WWE announcement, Mustafa Ali he occupied that presumable place of Mysterio. The explanation would not be long in coming and precisely the loss of the masked man it was due to an injury to his right leg.

Although Rey Mysterio has been absent from programming for the entire month of November, his son Dominik has not forgotten him and mentions him every chance he gets, but not exactly on good terms. In fact, During Thanksgiving, the young Mysterio and Rhea Ripley decided to take things to the extreme.

WWE posted a video of Dominick Y rhea ripley visiting her parents, who were celebrating Thanksgiving. In the video, Dominik’s mother appears first, who was surprised to see Rhea, and then it was Dominik himself. Rey the one who confronted the members of The Judgment Day, asking them to let them spend this holiday in peace.

As soon as Rey closes the door, Rhea Ripley bursts in and that distraction allows Dominik to land a couple of punches on his downed father. Later, the two proceed to focus the punishment on Rey’s injured foot, who was wearing a protective boot.

It remains to be seen what consequences Dominik’s attack on his father will bring, but things certainly won’t stay that way once Rey makes a full recovery. In any case, thanks to this situation It didn’t end up being a good Thanksgiving for him and his wife, Angie.

Dominik Mysterio attacked his father in his own home