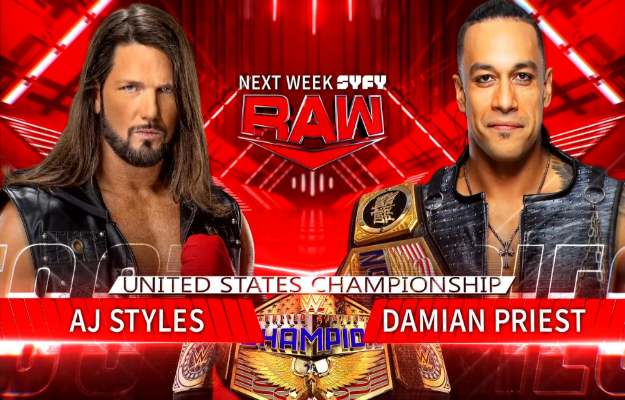 the phenomenal A.J. Styles has a great starting opportunity next week at raw for the United States Championship Damian Prisset, Will the archer of infamy come out of this great challenge unscathed.

Last night on Monday Night RAW we had a fight between AJ Styles and Damian Priest in which the latter did not have the same fate as always, despite the fact that the United States championship was not at stake, Damian was very damaged with a clean defeat against the phenomenal, this caused AJ to receive a bounty for the next week.

Shortly after in the evening it was confirmed that AJ Styles will get a shot at the United States Championship next week on RAW against Damian Priest. this will be the first individual title opportunity for AJ in a long time, as well as having the opportunity to be champion again since he lost the tag team championships with his former partner Omos.

Damian Priest has been on a great streak

Since the Puerto Rican blood won the WWE championship in the hottest event of the summer summer slam defeating Sheamus, his reign began as one of the greatest for the United States championship, every week at the red mark show it is about making an open challenge for that title and he always defends it successfully against different opponents.

The problem that has plagued Damian lately is that he cannot control his alter ego which sometimes puts him in a disadvantaged situation, maybe this will happen again next week and see the phenomenal win his fourth US championship, it’s certainly a very likely thing seeing the streak of good luck he’s been having, plus is already found inside the elimination chamber so the opportunities to be undisputed champion are visible.

Thank you for sharing your time and enjoying this great passion with PLANET WRESTLING. Remember that you can follow us on our RRSS and here on the web so you don’t miss anything. Every day we bring you the wwe news, videos, interviews, as well as the best coverage and live monitoring.
All the news from the world of wrestling and wrestling in PLANET WRESTLING.