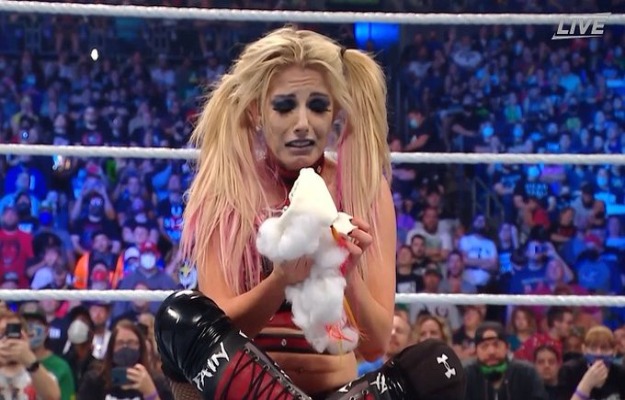 The Monday Night RAW Women’s Champion, Charlotte Flair faced Alexa Bliss in a title match last night at Extreme Rules. ‘The Queen’ achieved victory after distracting Bliss by throwing her wrist ‘Lilly’, which opened the doors for the sovereign to apply a Natural Selection and defeat Bliss on her back.

Nevertheless, the defeat was not what hurt Bliss the most, but the fact that ‘The Queen’ took her doll ‘Lilly’ after the match, tore it and tore it apart. With this, despair seized Alexa who attacked Charlotte after seeing what happened; unfortunately for Alexa, the queen fought back and escaped attack. Later, upon seeing the pieces of Lilly, Bliss began to scream and cry in a way never seen before, getting to run her makeup and drool on the ramp of the ring.

The actions committed by Charlotte are the maximum offense committed against Lilly and Alexa, who had been very aggressive against Shayna Baszler and Eva Marie, just because they had taken Lilly in their hands or trampled her on previous occasions; however, they had not caused physical damage to the doll.

In a backstage interview after the match, Flair explained his actions and why he found it necessary to destroy Lilly: “

You see, that’s the real problem. You’re cheering for Alexa by talking to her about Lilly, as I want to know how she feels after I can’t win the RAW Women’s Championship. There is the problem. I don’t want to talk about Lilly … The Alexa I faced (after the fight) was the classic Alexa, it was the Alexa I saw win the RAW Women’s Championship several times. Tonight, she attacked me and faced me on my face. Yes, I’m still The Queen, but that’s the ‘Lexi’ we all want to see, I don’t want to hear from Lilly. ” The Champion declared.

Finally, Charlotte added that by destroying Lilly she woke up Alexa Bliss. “Smashing Lilly was a wake-up call, a wake-up call to remind her that, in her heart, she can still be a champion.”

The video of the interview appears below: